Svetlana Ulasevich is an associate professor and researcher at ITMO University’s Infochemistry Scientific Center, as well as a specialist in sonochemistry, electrochemistry, and biomimetic materials. 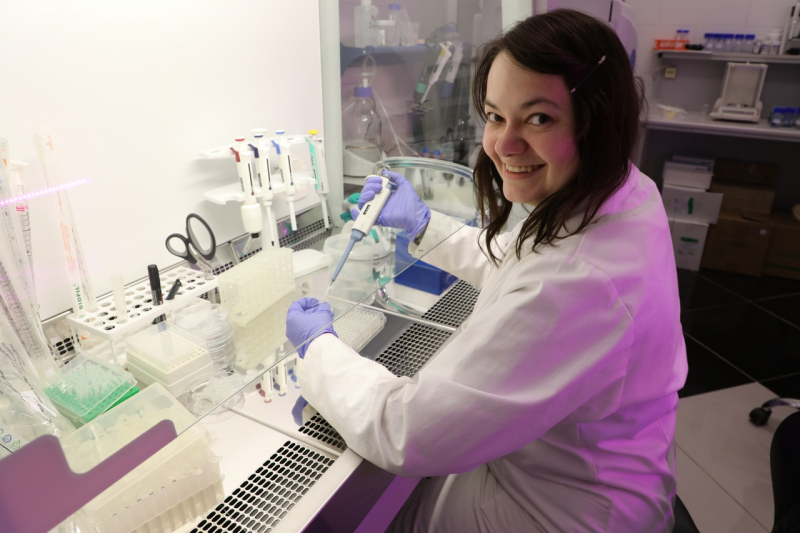 Dr. Ulasevish graduated from the Belarusian State University’s Faculty of Chemistry as one of the top ten students of her year; she worked on her PhD thesis at the Institute of General and Inorganic Chemistry of National Academy of Sciences of Belarus and the Max Planck Institute of Colloids and Interfaces in Potsdam, Germany. In 2017, it was named Belarus’s best thesis of the year in natural sciences. In 2018, Svetlana Ulasevich came to ITMO University to join Professor Ekaterina Skorb’s research team as part of the ITMO Fellowship Program. Now, thanks to a Russian Science Foundation grant and the support of ITMO University, she already has her own work group, with which she is currently working on titanium dioxide-based biomimetic materials.

An ITMO.NEWS writer met with Dr. Ulasevich to ask her about the future prospects of biomimetic materials, as well as the use of ultrasound in the structurization of chemical substances and implant surfaces.

On biomimetic materials and sonochemistry

From the very start, when I was still a student at the Belarusian State University, I always picked topics at the intersection of medicine and chemistry. The university encouraged us to do research alongside studies. I was interested in being a part of actual research, the kind where you don’t know the result in advance, where there are no answers, only questions. In my third year, I researched the synthesis of bioinorganic complexes used in the pharmaceutical industry. In my fifth year, I was part of a group developing titanium dioxide-based photocatalytic surfaces and studying their photobiocidal properties. It was an interesting experience of first creating a material, then putting bacteria on its surface to observe their inactivation.

I enjoyed this subject so much that I decided I would definitely do interdisciplinary research in the future. It’s difficult, but incredibly interesting at the same time. And, of course, such research is best done in collaboration. Thus, my dream came true at ITMO, where I got the opportunity to assemble a team of chemistry and biology specialists.

Now, for the main part. What are biomimetic materials? They are materials inspired by nature itself. Nature had millions of years of evolution to reach perfection. Biomimetic materials are artificial materials that have the properties of natural objects or are based on the principles living objects run on. The term may also refer to hybrid materials that are made up of inorganic and organic elements.

My main scientific interest lies in biocompatible and biomimetic materials. I develop biocompatible coatings that are capable of stimulating osteosis and osseointegration. Namely, composite coatings based on nanostructured metal surfaces and calcium phosphates. What makes them biomimetic? It used to be that calcium phosphates, which are used to coat medical alloys, were extracted from corals or other natural objects. These days, hydroxyapatite can be synthesized using the sol-gel method without the admixture of biological material. I previously worked with a research group where I dealt with producing various calcium phosphate-based composite materials, hydroxyapatite being one of them. We actively collaborated with Belmedpreparaty (a leading Belarusian pharmaceutical enterprise – Ed.), which adopted a hydroxyapatite gel the group developed. For my thesis, I studied the electrochemical formation of functional coatings on titanium. Now, this field is a sort of combination of my two strongest sides.

In the future, I’d like to develop an implant coating embedded with a drug that would only be released in the event of an inflammatory reaction, suppressing the development of post-surgical osteomyelitis and other infections. Coatings that contain drugs are great in that they deliver antibiotics straight to the affected area, which means we can use a smaller dose that would have a prolonged action without having a toxic effect on the body.

Another field I’m highly interested in is sonochemistry and the sonochemical methods of material structurization. Sonochemistry is a subset of chemistry that centers on the use of ultrasound in chemical reactions and processes. What makes sonochemical methods interesting is that they can be used to modify all kinds of materials regardless of their shape, and that includes implants. For instance, we’ve found that sonochemical treatment of the surface of an implant can result in a titanium dioxide coating that stimulates  the differentiation of cells into bone tissue without the need for osteoinductors. These coatings are not merely biocompatible, but they also actively stimulate the growth of bone tissue.

We’ve also discovered a curious effect: treating time-tested antibiotics – like, say, tetracycline – results in them becoming effective against resistant strains of bacteria. Right now, we are studying this intently and will publish an article on the subject.

On working in Germany

As a PhD student, I’ve spent a year and a half as an visiting specialist at the Max Planck Institute of Colloids and Interfaces (MPIKG). First, I was there as a member of Ekaterina Skorb’s team at the Department of Interfaces under the leadership of Helmuth Möhwald, and then we transferred to the Department of Biomaterials, which is headed by Peter Fratzl. Ekaterina Skorb was my research advisor on a project on the development of modified light-sensitives pH-sensitive coatings. We modified titanium dioxide coatings with pH-sensitive polyelectrolytes and then studied their interaction with cell cultures immobilized on the surface of the coatings – preosteoblasts. Under the effect of UV radiation, titanium dioxide is able to generate active forms of oxygen which, upon interaction with water adsorbed on the surface, form hydroxonium ions and hydroxide ions, resulting in the change in near-surface pH. A change in pH, in turn, causes changes in the conformation of pH-sensitive polyelectrolytes on the surface of titanium dioxide, and that affects the behavior of cells. For instance, preosteoblasts, which are adhesive cells, preferred solid surfaces, and migrated from less rigid areas to the more rigid ones. In this manner, we were able to control cell behavior using light.

I greatly enjoy working with Ekaterina – we have many scientific interests in common, such as the creation of various polyelectrolyte capsules for substance delivery. When I was done with my thesis and started looking at postdoc positions, I was also considering offers from the industry. But when I found out that Ekaterina moved to ITMO, I decided to apply for the ITMO Fellowship and Professorship Program – and passed the selection.

On research at ITMO and collaboration

I chose ITMO because it has a great deal of expertise in programming and various digital technologies, as well as lots of opportunities for collaboration and partnership. The global trend right now is that there are no scientists who only work in one field. If you want to contribute to a discipline, you must work at the intersection of several. Some parts of my research require complex mathematical work. And to me, ITMO seems like one of the strongest Russian universities in that regard, which is why I chose it – and I’m very happy with that choice now. I love that its motto – It’s more than a University – is completely justified, because it’s not just a university, it’s a family.

I’ve been very lucky in my life to have met many interesting and talented people. I love that, both at the Infochemistry Scientific Center and the ChemBio Cluster, chemists and biologists work together. I believe that it’s a unique combination. When we collaborate on this level, we can reach more than if we worked separately. This is the future of science. Right now, we work closely with chemists, biologists, and theoretical mathematicians. I would also like to bring medical researchers into the fold, so as to continue research into medical-purpose coatings.

In 2020, I assembled my own Biomimetic Materials Group at the Infochemistry Scientific Center with the support of a Russian Science Foundation grant. My project on the topic “Microdispenser and micromanipulator systems of biomedical purposes based on mesoporous titanium dioxide modified with polyelectrolyte membranes” is interesting in that we’re able to create coatings capable of interacting with not only bacteria, but cell cultures as well. Now, we have a laboratory where we can study the interactions between the materials we’ve developed and live cells, as well as observe their behavior.