The new method makes it possible to create thin elements on glass surfaces that are essential in the production of micro-optical components and phase elements for laser systems. An article on the subject was published in the Journal of Materials Processing Technology. 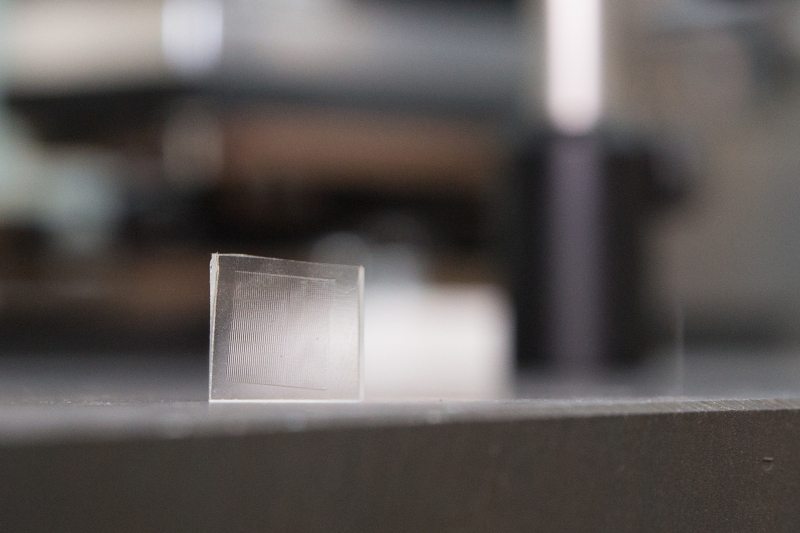 To control a laser beam in a lab, scientists need lots of different equipment: special lenses, diffraction gratings, waveguides. They are all hard to manufacture. Controlled etching of a nanorelief on a glass surface turns a glass plate into a functional optical element that can transform laser emissions. Such transformed beams are widely used in “optical tweezers”, precision materials processing,and high-resolution microscopy.

As of today, the best results were obtained using photolithography. But it is an expensive procedure due to the great number of steps it involves; it also calls for a lot of time which is spent on the processing of millimeter-size areas.

Scientists at ITMO University are actively developing the laser-initiated microplasma (LIMP) glass-processing method. It’s used with industrial laser systems equipped with fiber-optic lasers. The system’s key feature has to do with the position of the glass on the target’s surface. Laser emission passes through a transparent material but is intensively absorbed by the target, on the surface of which plasma emerges. Its interaction with glass results in the forming of a micro- or nano-relief.

“The idea of using laser emission-produced plasma in processing transparent materials is not new; it was successfully demonstrated by Vadim Veiko and his colleagues back in 1969, at the dawn of lasers,” comments Maksim Sergeev, senior researcher at ITMO’s Faculty of Laser Photonics and Optoelectronics. “Back then, the processing of diamond dies used for the production of wire that once took weeks could be done in several minutes of laser-plasma processing. The emergence of modern laser systems offers an opportunity to look at this process from a new perspective. The laser-initiated microplasma method was developed at our laboratory as a student initiative in 2015, and has gone a long way from studying the physics of the process to getting a wide practical application in photonics.”

Glass, target, and laser, working as one

Traditionally, the target was pressed firmly against the glass. But at some point, a problem emerges: the relief formed on the glass starts to change the laser beam. The closer the sample becomes to a ready lens or diffraction grating, the more it affects the beam’s form and size. This restricts the method’s processing resolution. The laboratory’s team succeeded in solving this problem.

ITMO researchers decided to modify the method by positioning the glass and the graphite not close by but rather with a gap between them.

“In the course of working on the thesis, we had to conduct some work on the optimization of the LIMP method. For instance, we came up with the idea of conducting an experiment to identify the optimal gap between the glass and the target. We organized the gap as an air-gap wedge: one edge of the glass rested on the target and the other was raised by a micron-sized air-gap wedge,” explains Vladimir Rymkevich, an engineer and PhD student at ITMO University. “We chose the size of the gap in such a way that there would be no track imprint on the glass at the end of the wedge.”

Using plasma at a distance is not always bad

As a result, the scientists showed that a specific gap can reduce the size of the laser beam that hits the target. This, in turn, makes the plasma plume on graphite’s surface smaller, as well.

“We conducted a detailed study of the effects of the key parameters of the LIMP method – emission power and constriction length – on processing results. The processing was done in both the focal plane and in diverging and converging laser beams,” says Vladimir Rymkevich. “As a result, we learned that at a specific gap between graphite and glass, melt-throughs emerged, and as emission power increased, they emerged closer to the beginning of the wedge. What’s more, in a converging laser beam, the melt-throughs emerged earlier than when processing in the focus or a diverging beam. We then measured the dimensions of tracks in both graphite and glass and got the correlations that are significant for our method.”

The processing of glass with the LIMP method using an air-gap wedge (glass on top, target below).

The theoretical calculations of the optical system with regard to the microlens and the plasma spraying angle correlate with the experimental data of the research. For one, the scientists have assessed the geometric efficiency of the improved method. It was 27%, which means that most of the plasma plume does not reach the glass. These calculations will be useful when creating the method’s energy model.

“We also found that thanks to the gap, we can dispose of graphite foam particles which also affect the recording process. This benefit is something supplementary, but it's a benefit nonetheless,” adds Vladimir Rymkevich.

In laser micro- and nanoprocessing circuits, one can’t do without special phase optical converters that are needed to change the shape of the initial laser beam or split it. The team of ITMO’s International Laboratory “Laser Micro- and Nanotechnologies” has designed and manufactured such elements using the LIMP method following a detailed study of the features of laser plasma’s effect on glass surfaces. Among the elements they created are microlens arrays, phase arrays, spiral particles, and phase masks.

“The LIMP method is a unique precise instrument that we’ve succeeded in optimizing for the production of phase optical converters,” comments Roman Zakoldaev, a research associate at the Faculty of Laser Photonics and Optoelectronics. “Today, we produce and use these elements in interference optical systems for recording nanostructures on the surface of various materials.”

The research on the focusing parameters in the LIMP method helped answer such important questions as “what should be the requirements for focusing parameters?” and “does the air gap affect the processing results?”. What’s more, the proposed model opens the way to building a full-fledged thermophysical model, which will eventually make it possible to predict the results of glass processing with the LIMP method and control it better.

“Our research showed only some of the hidden potential of using the LIMP method for the processing of glass with the opportunity for further increase of the processing resolution, processing efficiency and the method’s performance,” says Maksim Sergeev. “Taking into account the glass surface relief as an optical system, the shape of the plasma plume, and the size of the air gap, we can attain impressive results in glass processing. This, in its turn, opens up new horizons for creating more complex microoptical elements.”

The research was carried out as part of a grant from the Russian Science Foundation (project № 20-71-10103).