ITMO Fellowship Stories: Daniel Sapori on His Decision to Pursue Science in Russia

Daniel Sapori came from France to St. Petersburg to do applied research on perovskite solar cells. Now, he works at ITMO’s Laboratory of Hybrid Nanophotonics and Optoelectronics under the supervision of Sergey Makarov. 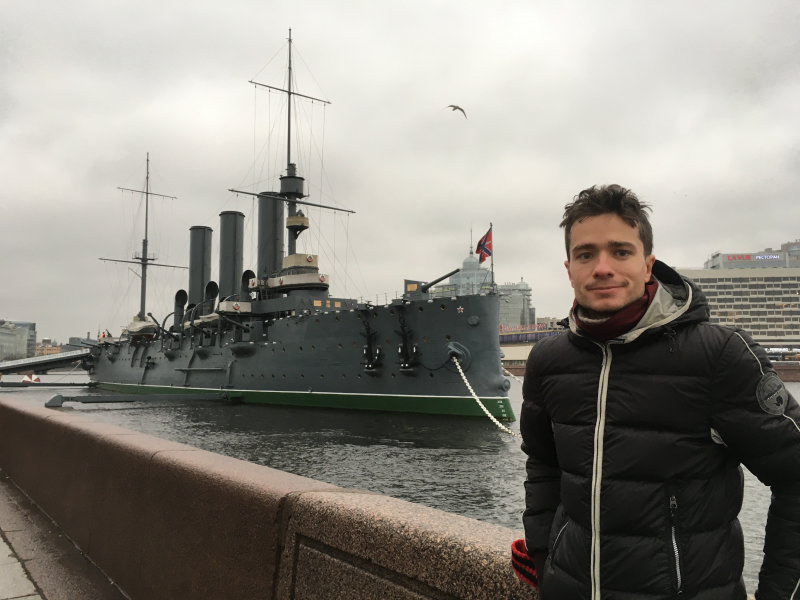 The ITMO Fellowship and Professorship Program was designed to bring scientists and professors from around the world to join ITMO University’s team. Daniel Sapori has already worked not only in his homeland France but also in Germany, Italy, and the US. Now, he’s going to stay in Russia for three years to complete the study of hybrid solar cells based on perovskites and organic materials.

ITMO.NEWS met with the young scientist to learn more about his career in science, interdisciplinary research, and decision to work in Russia.

Daniel, could you tell us more about your education?

I graduated from the CPE Lyon engineering school with a degree in chemistry and process engineering. In France, Engineering schools called Grandes Écoles are extremely common, and their diplomas provide competitive advantages in future careers. There, you master not only fundamental and applied science but also other disciplines such as management, humanities, and social sciences. This type of school is highly regarded in France, and its diplomas are equivalent to a Master’s degree in Russia.

In my last year of studies, I also enrolled in a double degree program to obtain a Master’s degree in Nanoengineering offered by a joint-venture between Claude Bernard University Lyon 1 and two engineering schools: the Central School of Lyon and the National Institute of Applied Sciences of Lyon.

So, you have a background in both chemistry and physics, right?

Yes, I do. I explored the main branches of chemistry at CPE Lyon and then had courses in physics – for example, physics of semiconductors, nanophotonics, and solar cells – during my Master’s studies. Moreover, it is worth mentioning that French engineering schools provide extensive training in the first two years of the curriculum and offer courses in mathematics, physics and chemistry to give a strong scientific foundation for its students’ future.

How did you come to work on perovskite solar cells?

I wanted to work in the field of new energies and solar cells are one of them. I believe that it’s an extremely promising field, which can change our future. In general, the energy industry is a very complex and demanding sphere, especially when it comes to the issues of sustainable and clean energy.

Because of my background in chemistry, I wanted to study organic solar cells and I wrote my Master’s thesis on this topic at the Fraunhofer Institute for Solar Energy Systems. At that time, scientists only started to become interested in innovative photovoltaic materials, including perovskites. Back then, it was a brand new field in photovoltaics, which was just starting to be explored, and I was really curious about it. Thus, after my graduation, I began to look for ways to enroll in a relevant PhD program. That’s how I got into the National Institute of Applied Sciences (INSA Rennes). There, I started to work on perovskite materials and got my PhD in 2018. After that, I became a PhD researcher at the National Institute of Solar Energy and studied perovskite-based tandem solar cells.

How did you find out about ITMO? And why did you decide to come here?

In December 2019, I went to Russia for holidays. I visited Moscow and St. Petersburg and really enjoyed the cities and especially St.Petersburg for its architecture and cultural activities. So I thought: “Why not try to get a job there?”.

In fact, I already knew some people working in my field of interest. Shortly after my trip, I attended a conference, during which Sergey Makarov presented some works of his laboratory. So, I decided to send him an email to ask about any job openings. And now I am here.

What are you planning to do at ITMO? Do you have an ultimate goal that you want to achieve?

This year, I want to work on perovskite-based tandem solar cells, which combine perovskite with another photoabsorber. This technology has already proved to be highly efficient, especially with silicon perovskite-based tandem. Now, we have to develop new materials for better device efficiency and figure out ways to put this technology into the industry. This brings us to the issue of scaling-up, as laboratories usually work with tiny samples. The industrial designs are, in turn, much larger. So, the transfer of technologies and their implementation are now a key challenge for me.

And yet, why Russia, and not Europe or the US?

I’ve already worked in Germany, Italy, and the US. So I wanted to go to a more exotic country: I don’t know the Russian language and its alphabet is different! In addition, I find its history fascinating, especially the communist era and imperial period. I came here to discover a new culture!

Are you going to travel around Russia?

I’d love to travel around Russia, learn more about Russian culture, and explore its different nooks. I’ll definitely visit Moscow again, and I also want to see the Ural Mountains. Frankly speaking, I don’t know much about Russia and its must-visit places, so I’ll ask around to learn more. It’s also great that there’s an opportunity to travel to Finland and the Baltic countries since they’re so close to St. Petersburg. While I’m here, I’d also like to attend the renowned opera and ballet.