The researchers from ITMO’s Faculty of Physics have created a multifunctional system for drug delivery capable of monitoring temperature inside living cells in real-time. Read on to learn what scientists need these measurements for and how they can be taken at the nanoscale. 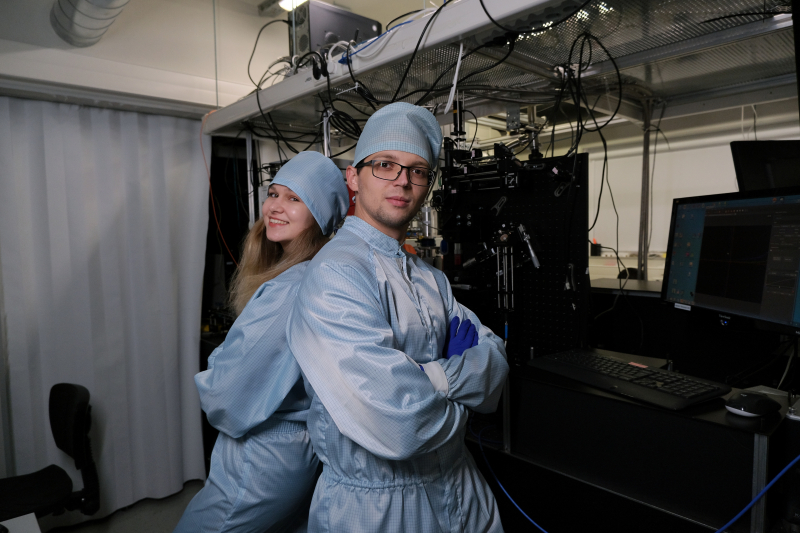 Nanoscale thermometry and its application

Nanoscale thermometry allows researchers to measure temperature at the nano- and microscales. In particular, its methods can be used to monitor the temperature inside living cells. It is critical for preventing an accidental overheating of the cells, including during the delivery of bioactive compounds in light-sensitive carriers exposed to light.

“Although laser radiation is commonly used for therapeutic purposes and local treatment, it causes cells and tissues to overheat and thus results in undesirable side-effects. For instance, it may reprogram cell death and division, gene expression, or growth factors. By monitoring how temperature changes under thermal exposure, we might find a way to prevent such side-effects,” explains Elena Gerasimova, a co-author of the paper and a PhD student at ITMO’s Faculty of Physics.

The proposed multi-functional system was designed specifically to measure the temperature inside living cells and verify whether thermometry was compatible with the delivery of bioactive compounds.

Resembling two hollow capsules, the technology is considered easy to manufacture. First, the scientists create a core from calcium carbonate, which they then cover with layers of polyelectrolytes. After that, they dissolve the core with ethylenediaminetetraacetic acid and obtain a hollow structure inside. During synthesis, various substances can be loaded both into the cavity of the capsule and into its shell.

Hollow capsules were also modified with gold nanoparticles and nanodiamonds with nitrogen vacancies. As explained by Elena Gerasimova, nanodiamonds make it possible to obtain high precision measurements due to their quantum mechanical and spin properties.

Then, the researchers made use of optically detected magnetic resonance (ODMR) to measure the temperature of the capsule destruction and that inside the cells. By adjusting the concentration and position of the gold nanoparticles in carriers, they managed to figure out the right laser power to decompose the capsules. The obtained results may potentially help scientists minimize the adverse effects on surrounding cells arising from laser radiation.

“The higher the concentration of gold in a capsule, the lower laser power we need. This way, we can reduce the amount of time required for running the process and minimize the negative consequences,” says Vitaly Yaroshenko, a co-author of the paper and a PhD student at ITMO’s Faculty of Physics.

The study has shown that the capsules’ destruction temperature is 128°C, with the accuracy of the obtained results being at 1.12 °C.

“These are solid figures for nanothermometric purposes. Some might think that one degree is a considerable margin of error, not knowing that other thermometry methods provide lower accuracy and are often affected by the environment. In our case, nanodiamonds allow us to take reliable measurements both inside and outside the cells,” comments Elena Gerasimova.

The scientists also succeeded in delivering a bioactive substance (a DAPI dye) simultaneously with conducting thermometry. Once a carrier is destroyed, the DAPI dye flows out of the shell and stains the cell nucleus. The study was conducted on melanoma cells.

The proposed system was found to be biocompatible and safe and can be used for targeted drug delivery. This is a promising method for cancer treatment that allows healthcare specialists to deliver drugs to the damaged area, without affecting healthy cells and tissues. Simultaneous temperature monitoring can help reduce side effects caused by laser radiation and overheating.