Russian researchers developed a new material, which converts infrared light to ultrashort pulses of ultraviolet. For this purpose, the scientists exposed silicon film to laser so that its relief adjusted under light wavelength and made properties of the material resonant. In the end, the researchers got a cheap and easy-to-make metasurface, which is as effective as existing ones. The new technology can help create compact UV generators for biophotonics and medicine, and also devices for ultradense data processing in optical communication. The study was published in Nanoscale. 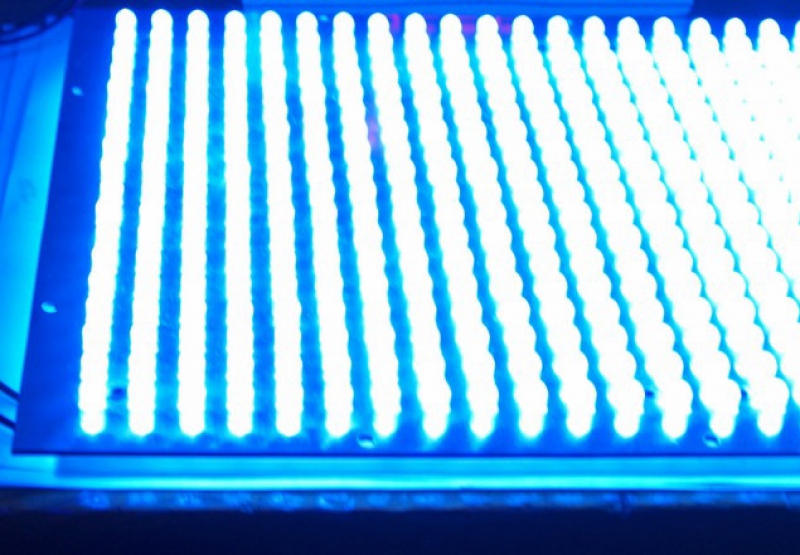 Biological media can reflect, absorb, scatter and re-emit light waves. Each of these processes contains information about micro- and macrostructure of the media, as well as shape and motion of its components. In this regard, "deep" ultraviolet is a promising tool for biology and medicine. Its application includes laser diagnostics and control of fast processes in cells, laser therapy and surgery at the molecular level.

Researchers from ITMO University and Saint Petersburg Academic University have developed a new method for nanostructures fabricatin, which is able to convert infrared light to deep ultraviolet. The structure is a film with a regular massive of nanolumps — metasurface. It is generated by radiating silicon film, whose thickness is 100 nanometers, with ultrashort or femtosecond laser pulses that form its relief. On the film surface, the laser smelts such nanolumps, which resonate only with its wavelength and thus allow more radiation to be turned into ultraviolet. In other words, the laser adjusts metasurface to itself. When the relief is formed, the scientists reduce the power so the film starts converting radiation without deformation. The researchers have managed not only to convert infrared light into violet, but also to get deep ultraviolet. Such radiation is strongly localized, has very short wavelength and distributes as femtosecond pulses. "For the first time, we’ve created the metasurface, which stably emits femtosecond pulses of big power in ultraviolet range," notes Anton Tsypkin, assistant of ITMO’s Department of Photonics and Optical Information Technology. "Such light can be applied in biology and medicine, as femtosecond pulses affect biological objects more precisely".

For example, using deep UV, one can take a picture of a molecule during its chemical transformation, and having studied the reaction by such images, — understand how to manage it. "A femtosecond compared to a second is almost like a second compared to the Universe lifetime. It’s even faster than vibration of atoms in molecules. So, such short pulses can tell us a lot about matter structure in motion," says the first author of the paper Sergey Makarov, senior research associate ofITMO’s Department of Nano-Photonics and Metamaterials.

The new technology may also find applications in optical communications. "Using ultrashort laser pulses for data transmission, we will make the flow denser and enhance its speed. It will increase the performance of systems for transferring and processing information. Besides, we can integrate such metasurfaces into optical chip to change beam frequency. This will help separate data flows and make large computing at the same time," comments Anton Tsypkin.

The metasurface obtained in this way is a monolithic structure, as opposed to being assembled of isolated particles, as it was before. It conducts heat better and thus lives longer without overheating.

According to the researchers, in photonics, one always has to search for compromise. Standard nonlinear crystals used for ultraviolet generation, are big, but can convert up to 20% of radiation. Such efficiency is higher than metasurfaces have, but laser pulses lengthen inside crystals. "This happens because a laser beam contains many wavelengths that differ from each other only by several decades of nanometers. Such variance is enough to make some waves surpass others after in a while. In order to make pulses ultrashort again, additional expensive devices are required", explains Sergey Makarov.

Thin structures, such as metasurfaces, do not allow laser pulses to misalign, but still have a low efficiency. Furthermore, both metasurfaces and crystals are usually expensive and difficult-to-make. However, in the new study, the scientists have managed to make metasurface fabrication much easier and cheaper, and at the same time these surfaces are as effective as their expensive counterparts.