Expert Opinion: What are Dielectric Nanoantennas and how to Apply THz Radiation?

THz radiation has various applications – from medicine to wireless communications. THz antennas can be based on dielectric nanoantennas – these days the researchers of ITMO’s Department of Nanophotonics and Metamaterials are pioneers in this promising field. Sergei Lepeshov, the author of a project devoted to dielectric nanoantenna’s development, shared about the technology. 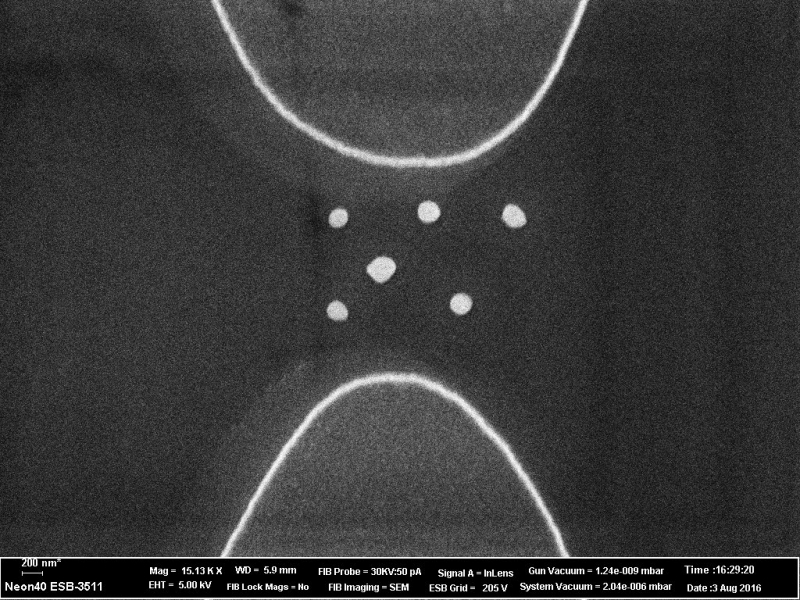 Having received a grant by the Innovation Support Fund, Sergei Lepeshov, engineer of the Department of Nanophotonics and Metamaterials gained an opportunity to analyze THz antennas and their components – dielectric antennas. The researcher patented his project and then implemented it into the market.

What are dielectric nanoantennas?

Nanoantennas are small devices the size of 100 nanometers that make it possible to manage electromagnetic waves at the frequency of light. Thanks to them one can focus and redirect light waves. Using these nanoantennas one can create metasurfaces that are 2D materials with prescribed electromagnetic properties. By changing nanoantenna’s geometry and periods between them, we can modify properties of a metasurface such as transmission, reflection and absorption coefficients. The increasing of absorption rate using nanoantennas is the core idea of Sergei Lepeshov’s project, which aims at developing efficient THz radiation sources based on nanoantennas. The main element of a THz antenna is a semi conductive substrate, in which one generates THz radiation. For these purposes it is radiated by ultrashort laser pulses. To increase the rate of absorption inside the substrate one covers it with nanoantennas. Usually one uses nanoantennas made of gold, silver and other metals. The engineer decided to use silicon instead of metals, which is widely used in nanoelectronics – transistors and semi conductive diodes that are used to make mobile phones or tablets consist of silicon. In other words, development of silicon-based nanostructures is a popular technology. Using silicon to make nanoantennas allows for implementing new optical technologies without modifying processing lines.

Firstly, unlike gold or silver, silicon – the main component of dielectric antennas – doesn’t absorb light at the frequencies needed for THz antenna’s excitation. Secondly, silicon makes such devices less expensive. One other property is a light transmission rate. The reflection coefficient of nanoantenna arrays made of gold or silver is very high. Thanks to silicon one can create metasurfaces that will transmit almost all light waves. About 98-99% of the light will hit a semiconductor, where THz antennas and their components nanoantennas are located; then it will be absorbed by a surface layer. A sample obtained in the experiment

How do dielectric nanoantennas work in a THz antenna?

When light hits dielectric antennas they scatter it in a special way. It results in increasing of an optical signal in a surface layer of the semiconductor where nanoantennas are located. In those parts of the layer with the increased signal one can see the process of generating electrons and “holes.” [A hole is a quasiparticle, which is used in semiconductors. Affected by, for instance, light waves the semiconductor produces a free electron. Then it finds a hole as a “pair,” in which the electron is negative and the hole is positive –Ed.] Thanks to this effective generation, current intensity in the THz antenna increases – then it affects the growth of THz radiation power. It means that dielectric nanoantennas leads to increasing of light radiation, the effective radiation in the semiconductor positively affects the current rate and finally, the current generates THz radiation.

Nanoantennas are used to increase THz signals of photoconductive antennas. As of now, these antennas can solve those challenges that modern optics and, for instance, radar systems cannot solve. For example, one needs to control the quality of various products (from medications to meat). For this purpose sensors based on THz technology are appropriate. THz radiation can penetrate those materials that light waves cannot – it can even go through walls. It means that a helmet equipped with a THz sensor gives soldiers an opportunity to observe what happens across the wall. THz can be also used in safety scanners in order to scan suitcases in airports. Some airports already use the equipment based on low frequency THz radiation, but it is not widespread. These scanners simplify examination, as they use a contactless technology. Moreover, it is absolutely harmless. Sometimes THz sensors are used instead of X-ray ones. The equipment used by Sergei Lepeshov

Medicine, quality control, safety, military purposes – these are only several areas to which THz technologies can be applied. However, the main application area is science. Today researchers are interested in interaction of THz radiation and other objects. For these research projects one uses complex and expensive devices including THz sources. The more effective these sources are the higher THz signals one can generate – this makes THz sources interesting for companies and labs that demand effective equipment. Thanks to this, the photoconductive antenna with dielectric nanoantennas is able to become more and more competitive than other THz sources.