From June 4-8, St. Petersburg hosted the second international Lasers&Photonics congress, which brought together 1,500 scientists, researchers and members of the industry in the fields of photonics, laser physics and quantum communications. One of the main events at the congress was an exhibition where companies from Russia, Belarus, Lithuania and Japan presented their products; ITMO University, too, showcased devices developed in cooperation with industrial partners. Holographic nanocomposite materials, Li-Fi devices, infrared sensors for high-speed fiber optic communications – these and other inventions are market-ready. 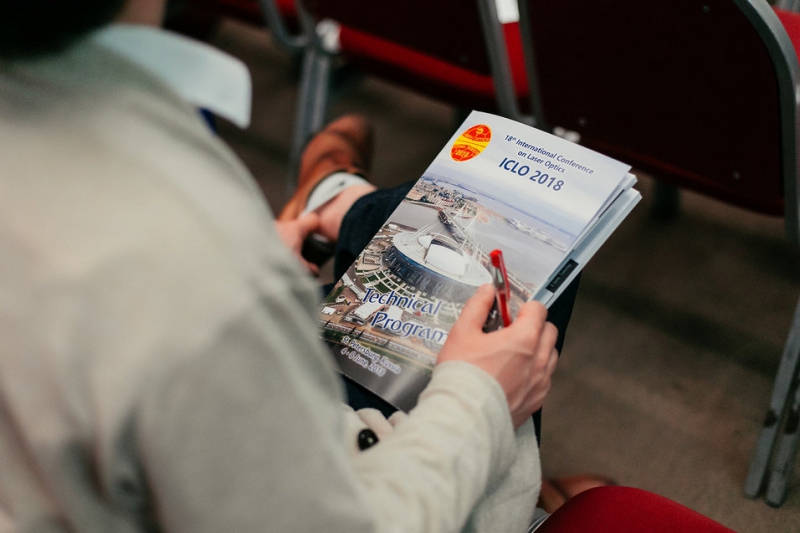 The second international congress Lasers&Photonics is one of the biggest events in the fields of photonics, laser physics and quantum communications in Eastern Europe. It is held with the support of the 5-100 Russian Academic Excellence Project and includes a number of events, among which are: the International Conference on Laser Optics (ICLO-2018), the conference “Days on Diffraction”, the 13th symposium on nanophotonics and metamaterials, a conference on nanostructures PCNSPA-2018 and more.

The congress opened in St. Petersburg on June 4 with a plenary session that featured talks from renowned scientists including Yasuhiko Arakawa, director of the Institute for Nano Quantum Information Electronics at the University of Tokyo, Robert Feidenhans’l, Chairman of the European XFEL Management Board, and Moti Segev, a professor of physics at the Technion Israel Institute of Technology. The scientists spoke about the progress made in the use of quantum dots in lasers, new prospects of scientific development and other topics (read more about the session in our article).

The exhibition, which launched on June 5, included projects by companies from Russia, Belarus, Lithuania, Finland and Japan. Among them are Special Systems Photonics LLC (Russia), Solar Laser Systems (Belarus), Fedal (Russia), Optogear OY (Finland), Maiman Electronics LLC (Russia), QD Laser, INC (Japan), Tydex LLC (Russia) and many others. ITMO University, too, presented some of its products. As Aleksandr Atraschenko, an advisor to ITMO’s Vice Rector for Research, emphasized, all of the devices and systems on show were developed in collaboration with the university’s industrial partners and are market-ready.

“The Lasers&Photonics is organized by ITMO University and the Fund for Laser Physics. By participating in the exhibition, the university chose to show its close relationship with the industry and present the inventions already being introduced into real production by our industrial partners. We have a device here we developed with the LOMO company, and it’s already part of a production line; we also have a few technologies here that are ready for production: Li-Fi systems, photoreceptors, and angle-of-approach lights” – he said.

Working on a grant from the Russian Ministry of Education and Science, scientists from ITMO University and experts from LOMO developed a line of multispectral analytical units, a new generation of medical light microscopes. The automated device can analyze blood and other biological substances for various criteria.

Another key feature of the machine is digital visualization: the microscope can transmit images to display screens and analyze it later. It interacts with informational systems and can be controlled remotely for conferences and, for example, to consult specialists at remote medical facilities.

The product line includes three models: scientific, base and expert, each intended for different users and tasks. The differences lie in the selection of lenses and the analytical capabilities.

“Its main advantage is automation and visualization. Why is that important? Well, there are cases sometimes when one doctor sees something in the sample, and another doesn’t. To make a correct diagnosis and solve the issue, you’d need an image that can be inspected by several people at once. Our device does just that, and can even securely transmit images online,” – shares Vyacheslav Lebedev, chief engineer at LOMO PLC.

The device was designed last year, and this year its creators are finishing up with pre-production tests; it can already enter the market next year. As Mr. Lebedev notes, the company has already received several pre-orders from a number of medical organizations.

Precision approach path indicators are used to determine a plane’s correct angle of approach to a runway. When a plane is on approach, pilots can see specific signs that let them identify a correct angle and land successfully. Major airports use special units for that purpose, but it is fairly large and not very mobile. Researchers at ITMO have developed a compact, mobile device for use at temporary airfields. This might be useful, for example, for emergency services planes that often need to land outside of major established airfields.

The device, created by scientists from the Department of IT in the Fuel and Energy Industry, is based on the creation of a composite image by several interconnected holograms. Pilots can observe a light and a horizontal line; the light goes up and down depending on the plane’s angle, and the optimal angle is achieved when the light is situated in the middle of the line.

Another technology currently in development at the lab is a holographic nanocomposite material with a potential application in secure protection of print documents.

The material is a photosensitive monomerical composite that includes various coloring agents and nanoparticles. Its working principle is based on the redistribution of material under the influence of radiation. Various protective holograms exist today, but this material boasts a number of advantages over others, explains Anton Bykov from ITMO University’s Department of Laser Systems and Technologies.

“First of all, it is extremely hard to fake. Let’s imagine you have it placed on a piece of paper. If someone were to try and remove the hologram from the paper, they would likely fail: it is absorbed into the paper and is attached very firmly,” – says Bykov – “One of the intended uses is document protection. Also, you might use it to apply an invisible QR-code on a plastic card; you can’t see it, but it might be detected by special devices. We’ve tested the material for reliability and it proved very resistant to humidity, temperature and friction. We believe there’s a lot of potential here and plan to continue our research.”

Specialists from ITMO University and O2 Lighting Systems are working on Li-Fi technology devices. Li-Fi stands for Light Fidelity and is a technology which allows for wireless data transfer with light instead of radio frequency signals. The source for a signal can be a simple light diode pulsing at high speed. A photoreceptor decodes these pulses into an electric signal, which, in turn, is decoded into digital data. The light diode and photoreceptor, therefore, serve as a kind of transmitters, where light is a “one” and lack of light is a “zero”. To humans, this data transfer is invisible: the pulses made by light diodes are too short to be noticed by the human eye.

At the conference, prototypes of a client unit and a master unit were shown. As Emil Gareev, a PhD student at the Department of Light Technologies and Optoelectronics, commented, right now the university and its partner company are continuing with their plans to produce units intended for integration into regular lighting fixtures and devices.

“One of this technology’s main advantages over Wi-Fi is its security. A Li-Fi signal cannot be intercepted through the wall: you actually have to be in the same room as the device. It can also be used in environments where Wi-Fi is less efficient, like in hospitals, on planes or underwater. It cannot be said to be a full-on substitute for Wi-Fi, but it can indeed be used to take some of the load off the existing Wi-Fi networks,” – explains Gareev.