Scientists from ITMO University developed a novel optical method of measuring reagent delivery rates for “labs on a chip”. The method is based on a dynamic interaction between a nanoantenna and luminescent molecules as the distance between them affects light intensity. Processed mathematically, these light dynamics help determine the flow speed. This method can also be used for measuring temperature and identifying flow types. The research was published in Laser & Photonics Reviews, making the front cover of the issue. 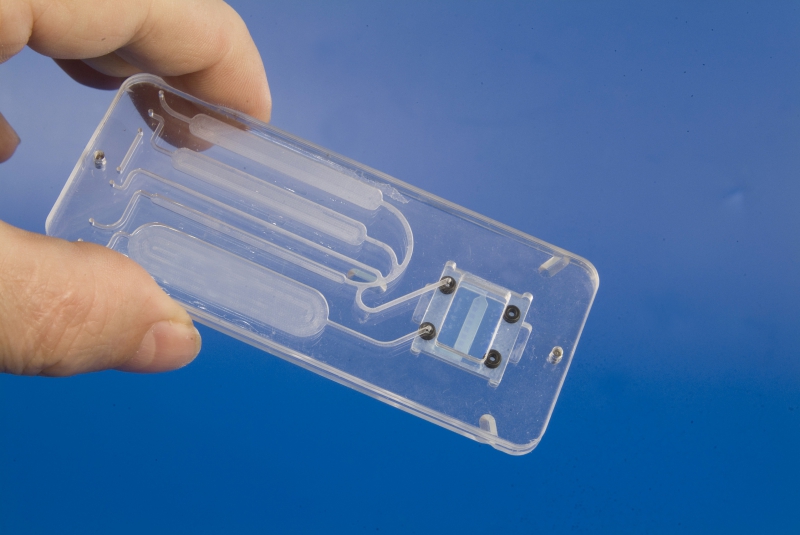 Lab on a chip. Credit: uv.es

“Lab on a chip” is a tiny device allowing to conduct chemical reactions of analysis or synthesis on a chip measuring up to several square centimeters in surface. It can be used for estimating concentration of substances, carrying out diagnostics or performing complex biochemical processes. Reagents are delivered via microtubules of a micronic (or even smaller) diameter. The delivery rate affects the course of the reaction, so scientists are developing special sensors to monitor this variable.

ITMO University scientists developed a novel optical method for measuring the speed of liquid micro-flows. It is based on the Purcell Effect, which appears when luminescent molecules interact with a nanoantenna concentrating electromagnetic field. The effect describes the impact the distance to nanoantenna has on the luminescence of excited molecules. Monitoring how a solution containing luminescent molecules changes its radiation when moving past the nanoantenna helps determine its speed.

“Luminescent molecules emit light when excited by a laser pulse. However, the duration of this emission may vary depending on how far they are from the nanoantenna. We run a luminescent-molecule solution past the nanoantenna, irradiate the region near the nanoantenna with a short laser pulse, and record how the signal fades. After special processing, the analysis of how the signal fades in time allows us to understand how quickly the solution was moving,” explains Alexey Kadochkin, research associate at ITMO University’s International Laboratory of Nano-opto-mechanics.

“This work still remains in the realm of theoretical, so we are really proud of the fact that it made the front cover. In the near future we plan to extend the method for measuring temperatures by recording the Brownian motion, learn how to distinguish between different flow types, and conduct experiments. As a result, we want to design a conclusive model for “lab on a chip” sensors,” says Alexander Shalin, head of ITMO University’s International Laboratory of Nano-opto-mechanics.