An international research team has described new molecular mechanisms regulating the activity of macrophages, which are crucial elements of the immune response, in a breakthrough project. Macrophage activation is regulated by the level of itaconate, which has various effects on the production of substances causing inflammation. Regulatory pathways of itaconate and its derivatives are associated with the pathogenesis of some autoimmune diseases. Experiments on mice and isolated human cells have shown that these substances can significantly alleviate the symptoms of psoriasis. The results of this study are published in Nature. 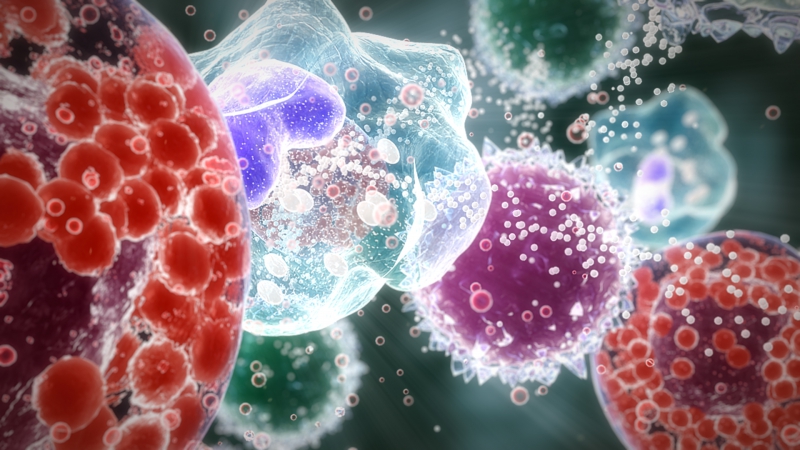 Regulation of the immune response through reorganization of cellular metabolism is one of the key topics in modern immunology. In the past few years, scientists have described a number of examples of such regulation. In particular, the joint research by scientists from Washington University in St. Louis and ITMO University demonstrated that macrophages are capable of changing their metabolism and immune activity by producing itaconate. Macrophages play an important role in inflammatory processes, and scientists have suggested that itaconate, or itaconic acid, reduces the inflammatory activity of macrophages by blocking one of the most important enzymes in these cells. This study was published in 2016 and attracted the attention of the scientific community. However, the exact regulatory mechanisms of this substance were described until now.

In a new article published in Nature journal, researchers described the molecular mechanisms of itaconate activity for the first time ever. They demonstrated that metabolic regulation through this substance can effectively reduce inflammation caused by autoimmune diseases in living organisms.

"This research began with us collecting and analyzing data on macrophage behavior. In 2016, we described a new metabolite regulating the immune response - itaconate, and now we have deciphered its mechanism of action. This allowed us to use itaconate derivatives in the treatment of psoriasis in model organisms," – says Maxim Artyomov, a professor at Washington University.

Using itaconate derivatives scientists managed to significantly alleviate the symptoms of psoriasis in mice as part of an experiment. The researchers then moved from ​mice to an isolated culture of human skin cells. They noted the same effect there: the inflammation decreased, and the symptoms of psoriasis became less pronounced. This suggests that the deciphered itaconate mode of action works in human cells as well. Therefore, it is possible to fight inflammatory autoimmune diseases with the help of this substance and its derivatives.

Scientists have found that both itaconate and its derivative dimethyl-itaconate actively connect to thiol groups of cellular proteins and other molecules. This process activates electrophilic stress but deactivates the genes of the inflammatory response. As a result, the synthesis of key inflammatory mediators (cytokines IL-6, IL-12) is selectively inhibited.

“We began looking for a molecular target of itaconate and its derivatives,” – says the lead author, an employee of Artyomov Lab at Washington University Monika Bambouskova. – “Having analyzed relevant literature, we decided to study a protein cascade regulating the activity of a number of "inflammatory" genes. These genes produce cytokines, so their regulatory cascade is considered to be key in the development of the inflammatory response.”

After a series of experiments on mice cells, the scientists discovered that itaconate has not one, but several alternative ways of affecting this cascade.

"During the experiments, we accumulated a massive amount of data that needed to be systematized and presented in a form convenient for biologists. It was necessary to compare the data on change in the production of dozens of proteins under different conditions to "hack" the itaconate mechanism of action. It turned out that the metabolic pathway of itaconate is associated with the pathogenesis of some autoimmune diseases," – explains Aleksei Sergushichev, an employee of ITMO’s International Laboratory “Computer Technologies” – "Further experiments have shown that itaconate actually helps fight against autoimmune diseases. My colleagues are now planning to conduct clinical trials so as to verify the effectiveness and safety of itaconate-based drugs."