An international team of scientists from Russia and the USA that includes researchers from ITMO University presented the world’s first photonic quadrupolar topological insulator. As opposed to the existing two-dimensional topological insulators, these new structures have only recently started to be researched. In the future, this research can open the way to the creation of new reliable traditional and quantum-optical devices with a higher-order topological defense, as well as topologically protected sources of classical and quantum light. The research was conducted with support from the Russian Foundation for Basic Research and published in Nature Photonics. 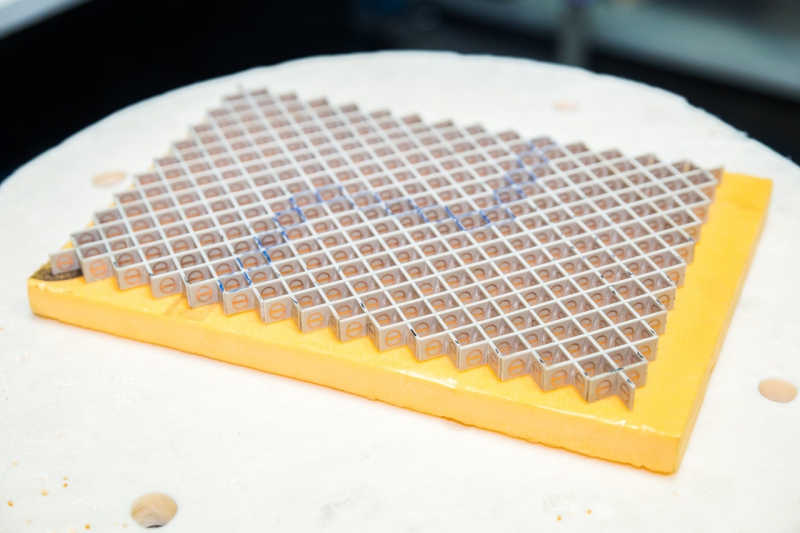 Topological insulators are a class of materials that has peculiar properties: a topological insulator is dielectric on the inside, and only a thin layer of its surface conducts electricity. Their main feature is that electrons in this surface layer exist in a “topologically protected” state: they are highly resistant to external disturbances and irregularities of the material, impurities and defects. Thanks to that, electricity can flow unidirectionally without outages and losses.

In the last decade, researchers started to develop ideas on how to create such states in photonics, as well. In order to increase the range of electrical topological insulators, scientists replace electrons with photons – quanta of electromagnetic radiation. For this purpose, they create special structures, photonic crystals and metamaterials, that have a specific lattice. In such a lattice, the photon feels as though it’s an electron, so to say. These structures are called photonic topological insulators.

Scientists have been actively working on such structures for the past five years. ITMO University’s researchers were the first ones to begin such work in Russia and have achieved much in this field. Their results are often published in international journals. For one, their last year’s research on a new method for studying topological structures and topological phase transitions in these structures was published in Nature Communications, and an article that described the physics of 3D topological insulators was published a year earlier.

Photonic topological insulators are very promising in the fields associated with the transfer of electromagnetic signals: optical systems, communication lines. For example, they can be used to create a waveguide where the radiation will propagate without dissipation due to defects or curves despite any external influences. This way, if the fiber-optical cable gets damaged, the optical signal will be lost, but a topological waveguide will stay operational despite the damage.

A new advance in this field has to do with researching higher-order topological insulators. According to the research’s co-author and member of the Faculty of Physics and Engineering Alexander Poddubny, while the electricity flows along the edges in regular two-dimensional insulators, in higher-order insulators such states don’t propagate along the edges but get localized on the corners.

“In case of a traditional topological insulator, we have something like a square in the center: it is forbidden to walk there, but there’s a good railway along its edges where you can move really effectively. In the case of a higher-order insulator, you can’t walk in the square or move along the edges, but only stand in the corners. This way, in traditional topological insulators, you have protected waveguides, and here you get protected resonators on the structure’s edges. Such corner states are a sort of resilient resonators that are very hard to damage. This field is very new, and we were the first in the world to demonstrate the possibility of creating such systems,” he says.

In the new research that was published in Nature Photonics, ITMO University scientists in collaboration with a team from the University of Maryland succeeded to create such photonic quadrupolar topological insulators. The theoretical part was conducted in Russia while the experiments were done by the American team which has leadership positions in what has to do with creating high-quality ring waveguide arrays.

Maksim Gorlach, another co-author and member of the Faculty of Physics and Engineering, notes that the logical continuation of this work will be the creation of higher-order topological states in a 3D structure.

“We are currently working on creating higher-order topological states in 3D geometries in an attempt to create a three-dimensional topologically protected waveguide. Just imagine: the light will propagate along complex nonplanar three-dimensional trajectories in this structure, without any dissipation on curves and with effective protection from disorder. This would’ve been very bright physics,” underlines the researcher.

He adds that at the moment, ITMO’s Faculty of Physics and Engineering has a very strong team of scientists and students who research the topological states of light.

“I believe that our team is capable of implementing new ambitious projects,” concludes Maksim Gorlach.