Today, scientists from all over the world face the task of creating optical switches. These devices will allow for transmitting information in binary code with the help of light, which in the future will be useful for the development of ultrafast optical memory cells. ITMO University scientists have demonstrated how to create, using a femtosecond laser, an all‐optical switch based on a metal‐organic framework which can be synthesized in vitro and is usually used in chemistry for gas absorption. The research has been published in the journal Angewandte Chemie. 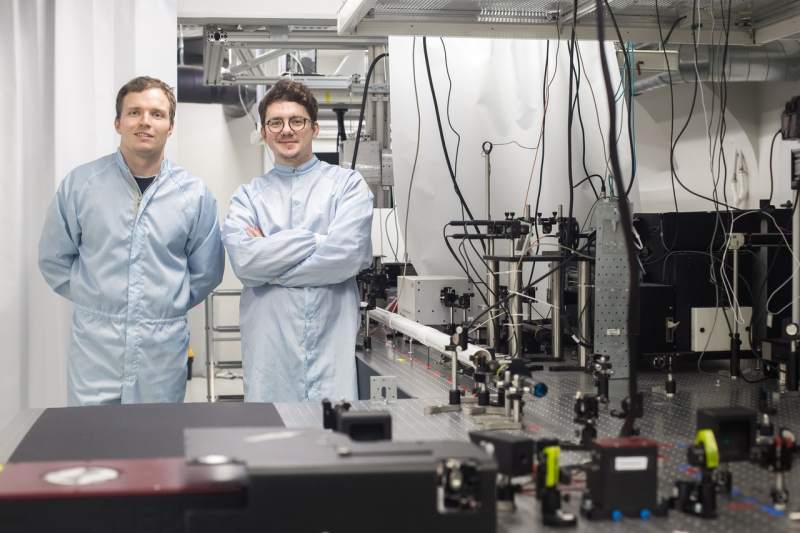 It often happens in science that in order to get a major result, you just need to look at familiar things from a new angle. For instance, scientists have been researching metal-organic frameworks (MOFs) for many years now. This is a class of functional materials which combine the properties of crystal lattice substances and organic compounds. From the former, they inherited a defined structure, from the latter – a large number of chemical bonds which enable them to enter into different chemical reactions, serve as catalysts or absorb gases.

But at some point, scientists expanded their focus to not only chemical but also optical properties of such complex materials. If you add a special, optically active (also known as photochromic) organic molecule to their structure, they will start interacting with light differently. If shone at with a laser, their molecules will rearrange, and they will become opaque – this property is called isomerization. But this process takes place over a relatively long period of time, from several minutes to several days, which, it would seem, pulls the plug on practical application of such MOF crystals.

Laser for switching off light

The idea underlying the paper came about at ITMO, in the Faculty of Physics and Engineering’s Russian-French laboratory headed by Valentin Milichko. Then, an international group of scientists from Russia, France, and the Netherlands, led by ITMO University scientists, decided to test whether it could be possible to manage the optical properties of not special MOFs but the very common metal-organic frameworks that have long been used in the chemical industry.

“We decided, why not use a group of MOFs that demonstrate the property of changing their structure under external stimuli such as pressure, temperature or others,” says Nikita Kulachenkov, a junior research associate at ITMO University and one of the paper’s authors. “Among these metal-organic frameworks was HKUST-1. It was very well-researched in the field of gas absorption, but no one could ever have thought that its properties, and consequently its structure, could undergo significant changes when exposed to light.”

Experiments with HKUST-1 metal-organic frameworks have shown that when subjected to an ultra-short pulse of an infrared laser, this MOF suddenly starts to transmit less light.

“The number of photons passing through the MOF decreased by about a hundred times,” explains Nikita Kulachenkov. “The switch-over period amounted to several dozen milliseconds. This is two to three orders better than offered by existing MOF-based organic systems.”

Physics-wise, this change has the following explanation – the femtosecond impact generated by the infrared laser is enough to, in effect, evaporate the water from the metal-organic framework. This leads to the MOF becoming less transparent for the laser-emitted light. But once you turn off the light, the framework reabsorbs water molecules from the air and returns to its initial state.

“In our paper, we demonstrate that with the increase of humidity, for example, when the crystal is placed in water, the switching effect occurs much faster,” adds Nikita Kulachenkov.

Onward to the optical logic

Scientists are experimenting with light transmission not just out of idle curiosity. Physicists, engineers and programmers from all over the world are increasingly talking about the prospects of so-called optical memory elements. These might replace modern devices, in which information is processed based on the movement of electrons. It is expected that computing elements operating on photons will work faster, more efficiently, and most importantly, consume less energy. But in order to get closer to bringing these bold plans to life, it is necessary to solve a number of theoretical and engineering problems. One of them is achieving reliable, energy-efficient, and low-cost light control.

“All of today’s digital electronics are built on so-called triggers,” explains Nikita Kulachenkov. “These are devices for switching between two states – 0 and 1. For optical devices, which might in the future take the place of our electronic devices, we also need this special switch.”

ITMO University scientists’ work caught the attention of the editors of Angewandte Chemie, one of the world’s three flagship chemistry journals, to such an extent that it was published at an extremely short notice, even despite the quarantine introduced due to the novel coronavirus pandemic.