ABBYY Founder David Yang on AI, Building a Business and the Meaning of Life

David Yang founded his company ABBYY when he was still a student at MIPT. Today, ABBYY is one of Russia’s largest IT companies and deals with optical character recognition, linguistic technology, and artificial intelligence. Yang spoke about his beginnings, what it takes to be an entrepreneur, the future of AI and the meaning of life at a public event in St. Petersburg. 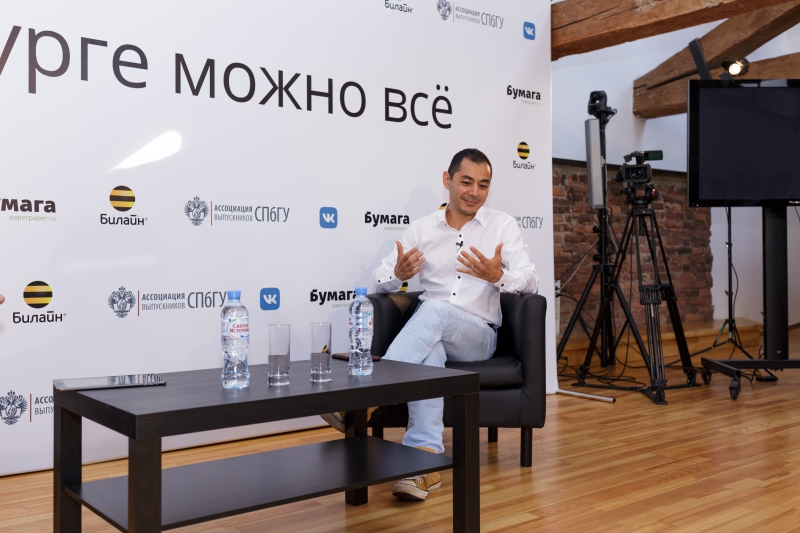 My first sales were actually in the hospitality business. We had a small coffee bar in our dormitory, with a coffee machine made from a hand drill, a large tin can, and a vice. The smell of coffee would spread through the whole building. We’d make about a 100 cups per night, each costing about 4 kopecks, which we sold for 20 kopecks each. Coffee is a high-margin business, that much was clear even in those days. We’d each earn about five rubles per night, which was plenty back then.

When I was about to graduate from MIPT, I got into dictionaries. My plan was to earn enough money over the summer to buy some sneakers: write the program in July, sell it to 100 clients in August, and then go back to working with my scientific adviser on solid-body physics and high-temperature energy production. But we weren’t able to finish our software over the summer and ended up in debt to the Youth Creative Science and Technics Center – what you’d call an incubator today. I came to them and presented my idea: a dictionary that can translate sentences like a human would. We asked for 3,000 rubles in funding, a huge sum in those days, enough to buy a new car; my father, a physicist, only earned 300 rubles a month. I don’t know how I would have ever been able to repay that debt on my stipend of 55 rubles. But we managed to find clients who were interested in our product. We didn’t have anything but a concept when we went around seeking funding; no one would think of funding a project like that these days.

It took a year to write the program, finish the dictionary and eliminate any bugs. In that time, I moved away from academia. Since I was in third grade, I’d always wanted to be a physicist, put all my efforts into it, even enrolled in the toughest institute there was, but decided that I’d graduate after taking a year off. I only came back to MIPT two or three years later, when we already had thousands of customers all over the world.

On academia and science

Back then, I still believed I would continue my scientific work. In the end, it’s still true: what we do today is very much science: text recognition, applied linguistics, it’s all computer science, too. I even did my thesis on recognition of handwritten texts. I have a friend at Stanford University who’s involved in high-energy physics. Sometimes I’ll visit him and see all these giant machines, humming and vibrating, and think: there it is, the frontier of human knowledge. But my friend, the Stanford professor, says that what we do at ABBYY is the real thing, something you can touch and use yourself.

On starting a business

Entrepreneurship is a professional field. You don’t need to come up with anything new here: just place yourself in a good environment, find good friends, read the right books and listen to the right lectures. When you get an idea, make a prototype on paper, test it, and only then start looking for funding. It’s much harder to get funding in Russia than it is in Silicon Valley, but an infrastructure is starting to form here, too: we have startup competitions where the prizes are pretty much initial investments. Then you’ve got business angels, venture funds and so on.

It’s important to learn to be friendly and tolerant of others. I struggled with this many times, especially when I was among other MIPT students: all of us ambitious, all with our own point of view. Still, after so many years, we haven’t fallen out. It’s important not to squabble and respect others’ opinions. Many books have been written about this, but we didn’t get to read them when we started out.

It’s also important to know when to move on. In 1997, when there were already more than a 100 employees at ABBYY, I had enough time for a new project, Cybiko. It was sort of like a precursor to Tinder – a social network based on geolocation. My investors would only invest in the project on the condition that I’d leave ABBYY: I’d still be chairman of the board there, but would only be allowed to be at the office once a month, while my new office would have to be at least 10 kilometers away from the old one. I was upset at first, but then I realized that this was one of the most important decisions for me and the company. When I left, it started to develop at a completely different pace. Any company is founded by romantics who want to do it all, but eventually, it must be inherited by pragmatists who can remove the unnecessary parts and make the business profitable. It’s like with a child: you can take your kid by hand to kindergarten, but not to the university.

Cybiko was the world’s first mobile communications computer. Users would add their personal details and choose what kind of users they’d like to communicate with. If someone fitting those preferences appeared in the 100-150 meter radius, the device would vibrate. It had an OS, a circuit board, a radio protocol. Over four months in 2000, we sold 450,000 of these in the USA alone. It became a must-have device at schools. It even had a Tamagotchi-like game where you’d have a pet that could meet other users’ pets and even travel to their devices. These characters would start families and produce children. There were online message boards where people would trade and exchange their characters. Even today, there are still a few online communities where people are trying to bring these things back to life.

Evolution can be both biological and technological. There is such a thing as technological singularity, which is when technology will reach a point where it will reproduce itself and surpass humans in its capabilities. It’s hard to predict just what will happen then. Of course, there’s a real possibility that biological life will cease to exist. Evolution gave all living things empathy in a moderate amount, all for the purpose of reproduction. Perhaps, our purpose is to create something that will outlive us all? Could technologies become our descendants?

People are saying that AI is the new electricity. When electricity first saw use, it changed every aspect of life. Those companies who didn’t shift from steam to electricity simply died off. The same is happening with AI. We’re not creating new needs, but our old ones are fulfilled in a different way.

At ABBYY, we’ve spent many years working on making tech that analyzes and understands natural language. Today that’s called content-intelligence. Our AI can analyze, for instance, contracts, technical specifications or workplace regulations: our machines scour through dozens of pages in minutes, identify certain parameters and compare them to other texts. Banks use this technology to decide whether or not to give someone a loan. We also came up with the idea of using it to analyze corporate correspondence. The system learned to identify employees who would soon quit a whole two months before the fact, even if the employee doesn’t know it themselves. Employees and their higher-ups are notified about the results, and the system even provides the reason: perhaps the employee is in a conflict with some other department or a manager. The program will also provide suggestions to managers, like how they should commend their employees more often.

This turned out to be a very popular technology with the HR. Human resources management is the least digitized area of the corporate world. Marketing, production – everything is digital there, and nobody there no longer thinks how things should be done; they just analyze their users’ habits. Decisions everywhere are based on data, while HR is one of the few places where decisions are still made based on intuition. Sometimes you’ll know that an employee is burning out, but don’t know how to help them. How do you sort things out in a team? You need a transparent system that lets employees know how they can become better and how managers can keep their staff. We believe that in a few years 80% of all businesses will use such a technology, just like everyone in marketing these days is using Google Analytics.

The meaning of life

It doesn’t actually matter what you do in life. What matters is that you’re happy. When I was a student, all the first-year students had this “Nobel Prize syndrome”. That’s when you get into a university and you think that the next thing for you now is getting the Nobel. At some point, maybe in the third year, you get over it. It doesn’t matter if you’ll get the prize or not, you just want to do something that interests you.