Another season has come to a close at ITMO Accelerator. Over the course of three months, students of various Russian universities learned how to launch and grow their startup. During the final Demo Day, they presented their ideas to an expert jury. ITMO.NEWS reports on the top five projects. 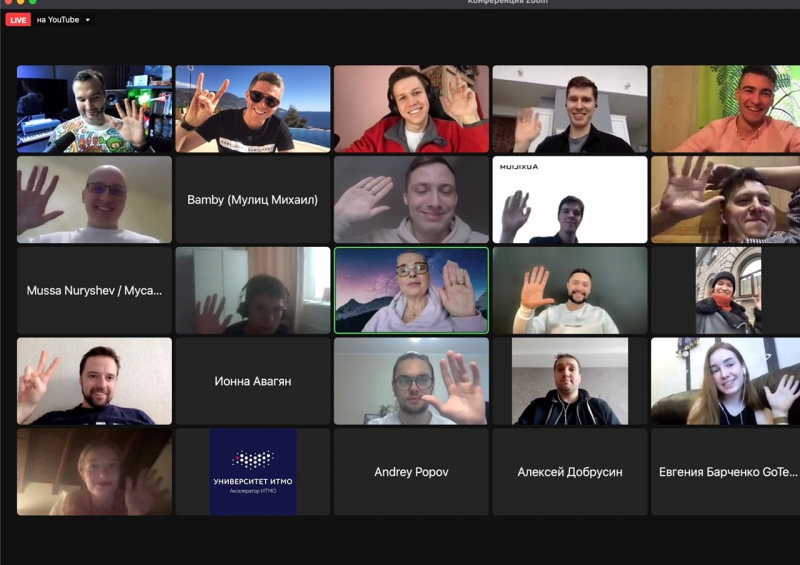 The Accelerator’s program included online webinars and workshops during which the participants – students of 11 Russian universities including ITMO, St. Petersburg State University, and Lomonosov Moscow State University – learned about marketing, team management, finance, and investments. In addition, the students worked on their ideas under the guidance of mentors. At the final Demo Day, they presented their projects, elaborated on future plans, and received expert feedback.

“ITMO Accelerator received more than 650 applicants from students all over Russia for its fall intake. We picked 65 projects to support, of which the 13 strongest and most promising ones made it to Demo Day. It’s important to note that all teams, without exception, have done a tremendous job. Unfortunately, not all projects reach a conclusion, and sometimes as they’re being developed, it becomes clear that the idea or the product is just not viable. There’s nothing bad about that; a negative result is still a result. We teach our students to keep going, to continue searching and work on new ideas, to move forward and never give up. An entrepreneur’s path is a difficult one and, like a sine wave, swings back and forth between depression and euphoria, but that’s the beauty of it,” says Alexey Solomatin, the head of ITMO Accelerator.

The winners were chosen by an expert jury that included Vitaly Yanko, a mentor at Startup Wise Guys and Baltic Sandbox, an executive partner at SoftwareLead Pro, and a partner at Insta Ventures; Eugenia Barchenko, COO at GoTech Innovation; Andrey Kapitonov, a Forbes Council member and founder and CEO of the Kapitan SMM advertising agency; Alexey Dobrusin, CEO of Hrust; and others. The experts evaluate each team’s performance, business model, domestic and overseas commercial potential, and likelihood of exponential growth, as well as each product’s degree of innovation and how well it addresses the consumers’ needs.

The fifth place at Demo Day went to Auxilium – a startup centered on active and passive exoskeletons. Its founder Alexey Ledyukov turned his passion into a commercial project that provides solutions to tasks in various industries; the technology can also be used by rescue and emergency services. The team has already begun receiving their first orders.

“We collaborated with the company Armocom and have already provided them with custom-ordered exoskeletons. Right now, we’re working on a contract with Special Materials Corp.,” says Alexey Ledyukov.

The fourth place went to I’m in:, a mobile app that allows users to find jobs and employees. Its key feature is the use of short-form video clips instead of CVs and job descriptions. Videos relevant to the user’s search parameters show up on a newsfeed, while prospective candidates or employers are selected using a grading system. Once mutual interest has been expressed, users can discuss further details in the chat.

This solution will simplify and accelerate the job-searching process thanks to the choice of video as the main medium: the format better represents each candidate and showcases their soft skills. For HR specialists, the app will reduce their workload by allowing them to spend less time on meeting each candidate and reviewing their resumes.

“A study by Harvard University found that 85% of success at work comes from well-developed soft skills and the other 15% from hard skills. It makes sense that candidates are expected to show off their soft skills when applying for jobs, but that’s hard to do through a regular CV,” comments Leonid Medvedev, the project’s CEO.

A marketplace for employee-care services

What do you do if your prospective staff are looking for more in terms of employee benefits than a medical plan and corporate English lessons? This was the question tackled by a team that ended up taking the third place at ITMO Accelerator’s Demo Day. Their product is the service marketplace Polza (“Benefit”). Its purpose is to help HR specialists attract and retain employees. Here’s how it works: a participating company grants points to its staff as part of the benefits package or as bonuses. Then, employees are free to choose for themselves how to spend their points. Right now, the platform already has 40 partners, including companies that provide cleaning, entertainment, educational, childcare, and delivery services, as well as mental and physical health support and more.

“I like entrepreneurship. It’s the most interesting of all the things I’ve tried. At first, I doubted whether I should join the program and if I really needed a mentor, but now my doubts have been dispelled. I think it was a great idea to join the Accelerator. If all goes well in the future, I’d like to join the ranks of its mentors and advise young entrepreneurs,” says Vyacheslav Keshkov, the project’s CEO.

A service for finding surrogate mothers and oocyte donors

The jury awarded second place to Bamby, a project that wants to bring together health clinics, customers, surrogate mothers, and oocyte donors. As its co-founder Mikhail Mulits explains, the Russian surrogate motherhood market currently exists in a gray area, as there is no official supervisory body in the country, while those that exist don’t have any sufficient regulation tools. This results in non-transparent pricing and fraud. The service aims to solve these issues and make the process accessible to customers. The team has already conducted their first deal and plans to reach 90 contracts per month by the end of the year.

“The idea for the project emerged a few years ago and changed its form several times. Every day there were excuses as to why it wasn’t the best time to start: sometimes it was the quarantine or the closed borders, sometimes – the founders’ busy schedule. We were looking for an environment in which it would be impossible not to accomplish something or fail the deadlines. ITMO Accelerator suited our needs. It connected us with great specialists who answered our questions with eagerness and passion. We created an MVP and launched sales, so there’s no way back now – from here, the project can only grow. I’d like to express our thanks for the opportunity provided to us and the high praise we received from the Accelerator team,” says Mikhail Mulits.

The Demo Day’s winner was the startup Metapunks, developed by ITMO graduate Daria Yakovleva. The project exists at the intersection of metaverses, 3D NFTs, and decentralized finance (DeFi). Metapunks is the first generative NFT collection based on the Algorand blockchain. The collection consists of 3,000 full-fledged 3D models created by a generator that was also developed by the project team. After purchasing an avatar, their owners are given voting power in the MetaDAO community (an upcoming financial instrument management platform), allowing them to participate in the management and development of the project’s fund – similar to the functions of a shareholder community, but in a more limited capacity. They’re also free to use their newly-acquired “punks” as avatars in the mozilla.hub virtual realm or integrate them into real life using AR tech.

The Metapunks project makes it easier to sell NFT collections via Algorand. Thanks to that, it has already been named a winner of Algorand Innovative Hackathon in the Digital Art/Collectibles Challenge category. In the first three months of its operation, the project’s team has earned more than $100,000 and entered the top 10 of NFT collections on Algorand by the number of sales.

“I’m very glad to have joined the Accelerator. It just so happened that I suddenly switched my project idea from text generation to NFTs and was assigned Kirill Kovalev, a crypto expert and investor, as my mentor. His guidance and advice helped us see the bigger picture and make informed decisions. It was also helpful for us to have weekly calls with the team. I observed the other teams’ progress, which also allowed me to see my own project in a different light. I want to say a huge thanks to Kirill and to our team for making this journey,” says Daria Yakovleva.

Last year, teams under the mentorship of Kirill Kovalev, who is a co-founder of Maria 01, a leading European startup hub, also took the winning spots. The expert shared his opinion on what helped the teams secure victory.

“In just a few months, the Metapunks project achieved phenomenal results. The project’s high potential is a credit to the team’s strengths: the members are former staff members of such companies as Yandex, VK, and Google. I’d like to note that the recognition that Metapunks, as representatives of the crypto industry, have received says a lot about ITMO Accelerator’s dynamic and progressive nature and, what’s more important, its ability to support high-tech venture projects capable of transforming their industry

Indeed, every now and then the projects I work with receive high praise from the industry. The success of the teams I mentor is a result of a unique approach to selection and acceleration. When choosing projects, I only reach out to those that match my competencies and experience. For their part, these teams make their own decision as to whether they want to work with me or not. Secondly, my role is limited during the acceleration: I am there as an assistant or advisor rather than a mentor or teacher. It is my belief that only the team can decide how they’ll grow and what kind of support they require. My task is to express my opinion and put them in touch with the right people, but not to make decisions for them or tell them what to do. The last, but equally important thing is that I actively use my connections to help these projects. After all, the more opinions they hear, the better. All in all, I believe that the key reason for these successes is how motivated the founders of these projects are,” says Kirill Kovalev.