ITMO University’s Department of Engineering and Computer Graphics, Center of Mixed Reality and Interface Design, the Video360Production project and the VR/AR Association have launched a series of events dedicated to the use of virtual, augmented and mixed reality technologies. Discussions will concern not only matters of the industry, but also the deeper aspects of VR as a new paradigm of existence. The first event’s discussions touched upon today’s VR/AR market, “gratuals and ingratuals”, and why philosophy is an integral part of virtual reality. 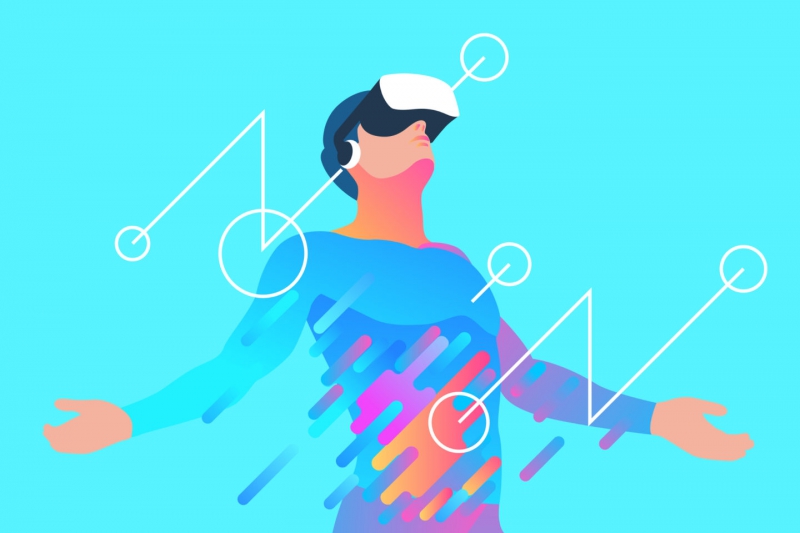 Heads of the Russian chapter of VR/AR Association, Serge and Michael Doudy, opened the event:

“My brother Michael and I are Russian in origin, but we spent most of our lives in the US. A few years ago we came to Russia to introduce Russian companies and startups to the VR/AR Association; it connects a great number of companies and developers in the field of VR/AR/MR. The Association currently includes more than 50 different departments and provides professionals access to many events all over the world. For Russian companies and startups, it’s important that it’s a way to connect with Western media. Alexey Ezhikov, head of Planoplan, is now a member of the Association’s committee on AR/VR in real estate; another Russian member is the company DevExperts, who are, too, taking part in today’s events,” – said Serge Doudy.

“The Association’s committees exist to consider various matters that can be solved in teams. There is a university committee that helps universities do research, share knowledge with each other and organize events and projects. There are opportunities for students, too, both in research and in employment, as the Association works with companies like Google, GoPro, Microsoft and others. Members also get access to major business publications such as Forbes, Business Insider and the like. You can participate in various affiliated events, too; the biggest among them is the global VR/AR summit which will take place in Vancouver in September,” – commented Michael Doudy.

According to Alexander Lavrov, CEO of Vizerra and a member of VR/AR’s Moscow Chapter, the high level of interest towards these technologies is due to them being part of the so-called “third wave” of user interfaces, which will come to replace regular screens; major players on the market are rushing to be the pioneers of the field. In 2017, augmented reality was one of the top 10 trends for commercial mobile devices.

Audiences expressed the most interest towards VR/AR in 2015-2016, but they are only becoming truly viable today. Virtual reality technologies are finally seeing actual use in real life, while augmented reality, too, is becoming more widespread. The result is that there is less discussion in the media, but more real-life applications. There is significant growth in the market, mostly thanks to massive investments (the well-known startup Magic Leap, for instance, has raised $2 billion in investments). Nearly 55% of VR/AR apps today are made with specific industries in mind; another 20% are educational in nature. Experts predict that by 2025, entertainment content will make up 60% of the industry.

VR and AR applications tend to be made either for internal (used within organizations for corporate purposes) or external (used for customer work) uses.

The cinema industry wants to use VR technologies, but today’s budgets aren’t suited for production of quality content. American producers admit that budgets for such projects are at the level of mediocre 1990’s commercials; yet the viewers’ expectations are unreasonably high. Still, VR technologies are seeing use in short films and trailers for feature films. As for the gaming industry, virtual and augmented reality technologies are most commonly present in gaming arcades (due to high prices of individual headsets).

It is said that 73% of millennials, i.e. people born between early 1990s and late 2000s, are interested in VR. And if people are interested in something, you can expect it to be used in advertising. In 2016, $1.1 billion was spent on VR advertising, and nearly $13 billion were spent in 2017. The manufacturing industry is the largest market segment, covering countless areas from helicopter manufacture to production of toilet paper. In the industry, VR/AR technologies are used to train staff as well as to demonstrate and advertise products.

Of course, the real estate industry has always prioritized visualization, which is why this new technology was met with great interest. Designers use VR and AR to work on projects, especially today, when most construction projects cover not just individual buildings, but entire infrastructures where it’s important that a number of people are on the same page. In retail, augmented reality is also common; the technology is often used as a marketing gimmick. As for internal applications, it is utilized, for example, in training merchandisers and consultants.

VR/AR technologies also see use in medicine, particularly in surgery, therapy and telemedicine, as well as personnel training.

Artem Smolin, head of ITMO’s Department of Engineering and Computer Graphics and a lead engineer at the Center of Mixed Reality and Interface Design, discussed the need for understanding of fundamental basics of VR, and talked about  the Russian School of Virtualistics:

“These days we talk about the Generation Z, for most of whom technology is an integral part of life. For a “homo virtualis”, someone who was born in the era of VR/AR, virtual environments will be as familiar as smartphones are to us. Current-day VR devices are just the tip of the iceberg; they are exciting, beautiful, fascinating, which is why they’re mainstream; but there is a foundation that is based on philosophy, art, sociology, culturology, etc. Had it not existed, the technologies wouldn’t either. The concept of “virtual” was a topic of discussion in Ancient Greece, among the likes of Plato and Aristotle. Without that foundation, the market and the technologies are nothing, as it creates the environment in which all else is formed – the industry, the devices, the content, and so on,” – he explained.

The Russian School of Virtualistics, which has celebrated its 80th anniversary this year, counts among its members many highly-qualified philosophers, sociologists and culturologists who consider the concept of virtual reality from a philosophical point of view. They say that there is objective reality and there is a virtual reality which is born by the former. The school has published a Virtualistics Manifesto (in Russian) in which they define what is meant by “other realities”. The manifesto describes four properties of a virtual reality: it is born by the activity of some other reality; it is actualized, i.e. it exists here and now and not in the past; it is autonomous, and exists as a simulacrum; and finally, it is interactive, meaning that realities interact, and the simulacra we’ve created begin to have an effect on us.

To further define the meaning of “virtual”, experts have categorized “constant” and “virtual” realities. Constant realities are one that create other realities, i.e. simulacra. By creating VR headsets, we create new realities; they, in turn, can create new ones and also become constant by definition.

Experts have also introduced the terms “gratual” and “ingratual”. A person who communicates with virtual reality is a “virtual”; someone who is comfortable with existing in the virtual environment is a “gratual” (from Latin gratus – “pleasing”), while someone who experiences discomfort and rejects virtual spaces is an “ingratual”.

Denis Stolyarov, lead engineer at the Center of Mixed Reality and Interface Design, CEO of Video360Production, and head of the St. Petersburg Branch of the VR/AR Association, spoke about the evolution of panoramic video:

“Automated 360-degree video cameras have actually been around for a while. Like today, they would use six to eight cameras to record videos that would later be stitched together using specialized software. Some of those first cameras even made their way to Russia, but back then (2008-2010), mass application of VR was unthinkable; video hosting websites didn’t support the format, so it was nearly useless. Once wearable VR headsets appeared, it all changed – hosting platforms, one after another, began to support the technology, and users expressed greater interest. At the time there weren’t any of today’s mass-produced panoramic cameras, so most videomakers used DIY contraptions made of six, eight, ten or twelve GoPro cameras on a special rig. Those videos had a great quality, too, since each individual GoPro records hi-def video up to 4K in resolution. Such rigs are still useful in some situations. One such contraption was made back in 2015 at ITMO University and resulted in the project Video360Production, which is now a small innovative enterprise under the umbrella of ITMO University,” – explained Denis Stolyarov.

In 2017, a great number of 360-degree cameras appeared on the market – from cheap deal-lens cameras to expensive ones with a greater number of lenses. Cheaper cameras tend to shoot in 4K and are suitable for anyone interested in panoramic video and VR. Professional cameras are mostly used by studios making VR content.

Denis Stolyarov also discussed several examples of how 360-degree video technology is used in real life – in collaboration with the State Hermitage Museum, in projects for major construction of power companies, for VR-booths at the St. Petersburg International Economic Forum, at music concerts, etc. He concluded his talk with an example of unorthodox use of VR – the project VR Bus by the US company Lockheed Martin, who created a specially-modified bus that lets its passengers experience an interactive “road-trip” on the surface of Mars.

Ilya Filippov, head of digital marketing at Piligrim XXI, spoke about the future prospects for integration of augmented reality and blockchain. His company is currently launching a new global product – the decentralized platform Arcona, intended to serve as a common platform for AR projects all over the globe. Arcona is based on unique algorithms that allow for automatic generation of layers of augmented reality in any point of the Earth with the help of natural markers.

“Our project’s main goal is to make the AR market accessible to the mass audience. We provide them with simple, easy-to-use tools that let just about anyone create their own AR objects and place them anywhere in the world remotely. Large-scale multi-user projects like this don’t need a lot in terms of technical solutions, but they need specific infrastructure. Our augmented layer, just like the real world, is decentralized and is segmented into many areas. Some of them are owned, some rented out, others used for test projects. It’s incredibly hard to monitor each area and make sure it’s being used correctly, and we use blockchain to do that. Another benefit of that is that the system becomes fully transparent and equal for all its members. Smart contracts protect the intellectual property of developers and artists, letting them safely make profit off their work. All objects are automatically assigned an author and everyone puts a price on their work. The instant, transparent payment system prevents any fraudulent use of its content. In this way, the specifics of blockchain tech let us create unprecedented, new AR platforms where everyone, from independent developers to major companies, is equally comfortable working and making profit,” – emphasized Ilya Filippov.