IV International Spatial Development Forum: What You Need to Know about Building a Campus

The fourth international spatial development forum was recently held in St. Petersburg at the “Manege” Central Exhibition Hall. The theme of this year’s forum was “iCities: New Codes - New Rules”. The forum’s organizers went from an impersonal discussion of buildings, technology and development programs to the essence of a human-oriented city, based on the principles of citizen engagement and sustainable development, and also the use of smart technologies. The future of Russia’s innovative campuses was also discussed at the forum. 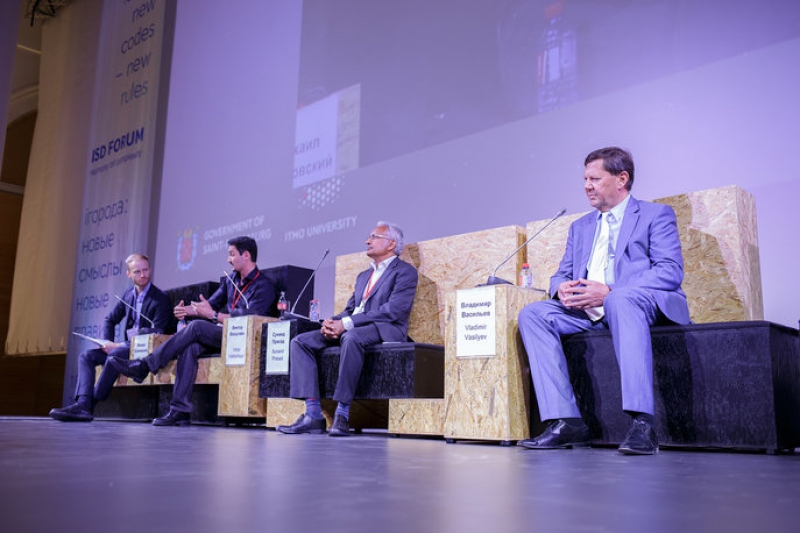 More than 80 Russian and international experts from Moscow and other regions of Russia as well as from the CIS, Asia, Europe, and USA were invited as speakers to the Forum. They include government and business leaders, as well as representatives of contemporary culture and art, digital sphere and innovation, representatives of academia, public organizations, architects, urban planners and city leaders. Sergej Movchan, Vice-Governor of St. Petersburg, gave the welcoming address at the forum.

“It is no coincidence that the focus of the IV International Forum of Spatial Development includes issues related to artificial intelligence and smart-technologies that permeate modern society and those values that characterize our i-generation. I believe it is very important to discuss how the social, cultural, spatial and architectural landscape of our cities will change. Our cities will face new challenges such as the growth of the population in the city center and its decrease in the suburbs. The modern metropolis is, more than anything else, people. Today we are building a human-oriented St. Petersburg. This finds its embodiment in Strategy 2030, and we understand that the further development of St. Petersburg as a modern city is impossible without the development of a smart economy, and promotion of high-tech digital technologies”, - said Sergej Movchan.

One of the plenary sessions of the conference “The environment shapes the individual, and the individual shapes his or her environment” explored the modern educational campus and which mistakes should be avoided in their design. Victor Vakhshtain, Dean of the Faculty of Sociology at the Moscow School of Social and Economic Sciences, who researched a number of campuses, talked about which campuses exist currently in Russia and why many of them are perceived as ghettos.

He explained that new territories such as IT clusters are much like single-industry towns, they are places in which people don’t like to live, and university campuses are not much different. The biggest request, he explains, that people who will be living in such clusters have, is to be placed within an urban environment. So, bringing together young, educated people on an amazing campus with a technopark, and IT-village, is not the solution.

“Part of the problem is that we think in terms of clusters. Campuses built in Russia are divided into two categories. One is for those who want to keep people, for example in Tomsk, so they don’t leave to Moscow. The second is for those who’ve already moved, to create a space for them, like in Moscow where there they need to create new places for those who aren’t local. In either scenario, we are trying to store people in containers, either to stop them from leaving or receive them when they arrive. Thus the role of a campus is to act as a container of human capital,” the expert explained.

At the point when it is the heterogeneity of the elements that make up a city rather than the scale that becomes the decisive factor in urban planning, a campus should not be located outside of the urban environment, an alternative city outside of the city shouldn’t be created, explains Victor Vakhshtain. There are three types of heterogeneity: different people, activities and spaces.  Thus, when creating new spaces, the worst thing you can do is to repeat the mistakes of mono-industrialization, when there is only one active industry, even if it’s a university, and spaces are created which are structured to fit the needs of this type of activity.

There were a number of questions asked about ITMO University’s Highpark: its design, significance for ITMO University and management mode. Vladimir Vasilyev, ITMO’s Rector commented on the situation:

“The university currently occupies 42 buildings spread out across St. Petersburg, however, the majority are concentrated in the historic center of the city. The original idea was to give up the buildings and build a huge campus where it would be possible to live independently from the city. However, unlike other campuses of this kind in Russia, this does not suit our vision. It’s important for us to be integrated into the city environment, in order to gather like-minded people, and that students who come to us from other cities feel the “code of St. Petersburg”. It is noteworthy that Peter I did not create a city, he created a new Russian man. Even in 1703, they were already talking about heterogeneity, which we are discussing today.”

Now the University’s management and its partners for the ITMO Highpark project are discussing what this new space should be like, and what connections should be created between the current buildings and the future campus that will be built.

Also, during the forum, the Institute of Design and Urban Studies at ITMO University presented a prototype of a city control system. The purpose of the system is to support science-based decision making and predictive modeling of scenarios within the development of a city.

Using the Petrogradsky district of St. Petersburg as an example, the staff of the institute showed a few scenarios that reflect the history of the district and the current situation, as well as presented urban development forecasts of the area. Also, the Quality of life laboratory presented the game “Build your city”. The game offers its participants a chance to build their city from scratch and make its inhabitants happy.