Teens in Tech, a school of technological entrepreneurship for high school students, has just wrapped up at ITMO University’s Faculty of Technological Management and Innovations. Over the course of four days, the students worked to create their own business projects, learning about innovation business and technological entrepreneurship along the way. Read on to find all about the completed projects by the participants of this year’s spring Teens in Tech. 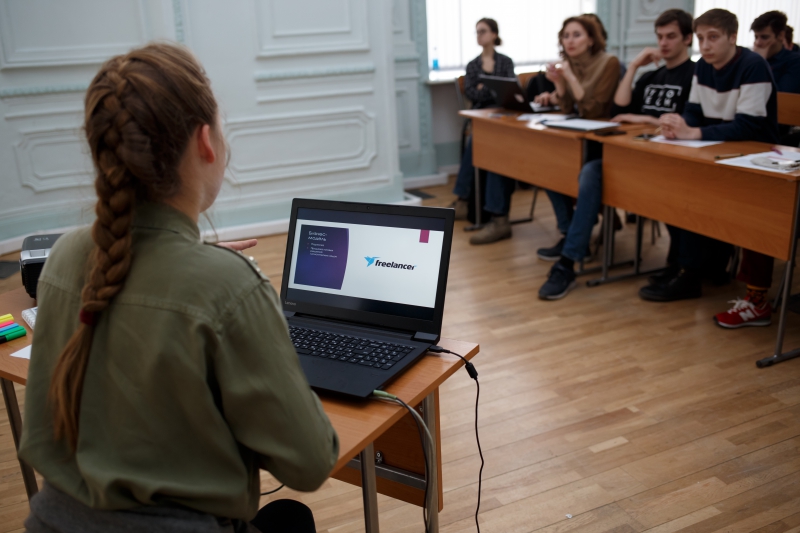 The one that outshone them all: Sunbrella, an umbrella for hot weather with built-in water-spraying device

Proposing the solution of beach and portable umbrellas with a built-in water-spraying system, the project that won this spring’s session of Teens in Tech aimed to come to the rescue of people suffering from the heat, be it wide-eyed tourists or seasoned southerners.

The prototype of the umbrella in question looks just like a regular parasol, bar one special feature: a built-in water reservoir and a pump that delivers water to valves in charge of performing the spraying action. With one spritz taking up to 12 mL of water, the 300 mL reservoir has the capacity to provide a relatively long-lasting heat relief. The workings of the smart umbrella system are powered by a battery that can be charged using a regular phone charger. The spraying is activated by the holidaymakers once they decide that they’ve had enough.

The surface of the parasol is light-reflective, while its body is planned to be made from a special plastic with low heat conductivity. To prevent the handle from overheating, it will be equipped with a Peltier element, i.e. a thermoelectric converter responsible for cooling things down.

The one that dropped the beat: multi-platform music app MBM

The members of this team presented an idea of an app for watching films and listening to music and audiobooks.

“Listening to music, the majority of people, teens and adults alike, encounter the problem of limited access to the content in question. And despite all the benefits it could entail, only a small amount of people actually listen to audiobooks because of their price veering on the more expensive side. What we offer is an app that will be the first to unite music, audiobooks and movies on a single platform with a modest subscription fee starting at 45 rubles,” explains the team behind the MBM app.

Apart from the price, what makes MBM’s subscription system special is that its users can pick and choose between the content on offer, as an example exclusively opting for music and audiobooks or music and movies, with the fee changing accordingly. By this the team aims to simultaneously solve several problems: the time limit that often comes with free access to music, as well as excessive advertising and high prices reigning supreme on most entertainment platforms out there.

The participants have far-reaching plans that include establishing partnerships with famous artists, which will grant the platform's users early access to new songs and albums, as well as featuring a variety of curated playlists. To promote the platform, its authors intend to enlist the help of popular bloggers.

As of now, the app allows for two color modes, a light and a dark one, but this is to change in the future, with each user getting the opportunity to add their two cents to the interface, from choosing colors to deciding between different structural elements. This option will offered as part of a separate subscription option.

The one that had an ace up its sleeve: smart clothes

In their turn, the team that touted the smart clothes concept wanted to do their bit for athletes and travelers. Pointing to the fact that regular clothes aren’t fit for the extreme conditions of the forest, water and mountains, the participants proposed an idea of functional apparel with a water- and dirt-proof guarantee. It’s also conveniently equipped with a phone charger. Although for now the clothing must be charged in advance, the authors envisage the later models of the gear to be powered by solar energy and energy from its wearers’ own movements. The clothing keeps in the heat in cold weather and the cool in warm one.

“Nylon, which is what we plan to create our smart apparel from, is a very versatile material: it doesn’t let water in but still is breathable, with nylon-made garments keeping for longer. The clothing is just one part of the system; users can up its effect by purchasing a charger, a 12-hour water-resistant spray, special gloves and other features. We’ve carried out a survey and found out that people are ready to pay up to $200 for our offering, which is exactly the pricetag we are looking at,” say the authors of the project.

The one that’s all over the map: software complex for the optimization of transport logistics

Members of the fourth team have developed a software complex capable of building optimal itineraries. With the promise of reducing costs and time of delivery, the software could be of use to logistics companies.

“It would be easier to explain the functionality of our software on the example of the company Yandex and their transportation service Yandex.Taxi, which allows for users to hail taxis online. The main advantage of the service is the speed of taxi delivery and low travel fares. These parameters are achieved thanks to Yandex’s way of solving the logistics problem, i. e. the complexity of reducing the time needed for a taxi to reach the client ordering it. This problem calls for the dispersion of taxi pool across the city with the consideration of the following aspects: traffic jams, road accidents, public holidays, weather and others. To enable a car to reach a client faster, it’s important to reduce the information processing time and choose the taxi with the closest proximity to the client. And this is what our software excels at,” comment the authors of the project.

But commercial companies aren’t the only ones to benefit from this software. Government agencies could also use it to improve the work of public transport.

“We selected the most active students from all over St. Petersburg and Leningrad Oblast. Evaluation was based on participants’ motivation letters and background: whether they had any experience in developing their own projects, and whether they had a ready idea and ambition to do something of use. Choosing the top-20 wasn’t an easy task, but we’re proud of our finalists, who presented projects on very high level,” shares Tatiana Tokareva, the vice dean of ITMO University’s Faculty of Technological Management and Innovations.

The spring 2019 session was the fifth in the school’s two-year history. Initiated by two ITMO University staff Tatiana Gaponenko and Arseny Tretyakov, the first Teens in Tech took place in 2017. Some of the Teens in Tech alumni have already gained support of investors. For instance, Kristina Mikhaylova, who created a bracelet capable of transforming the heat of the human body into electric energy to charge appliances, received half a million rubles worth of investments to further develop the prototype of her invention.

“What we’re witnessing is a formation of the much talked-of model of continuous education, where young people decide on the direction of their future professional development even before graduating from school,” concludes Igor Kuprienko, head of ITMO University’s Center for Project Development and Fundraising.