The site of the former Gatchina dairy plant will become home to the MOLZAVOD Center of Culture, Art, and Education as early as this summer. The project’s strategic goal is to showcase the synthesis of science and art, which is why its curators have invited students of ITMO University’s Art & Science Master’s Program for a summer internship during which they developed various project concepts for the future venue. Their ideas include an open school of science and art, an AR-quest, an exhibition of endangered relict plants, and more. Learn more in our report. 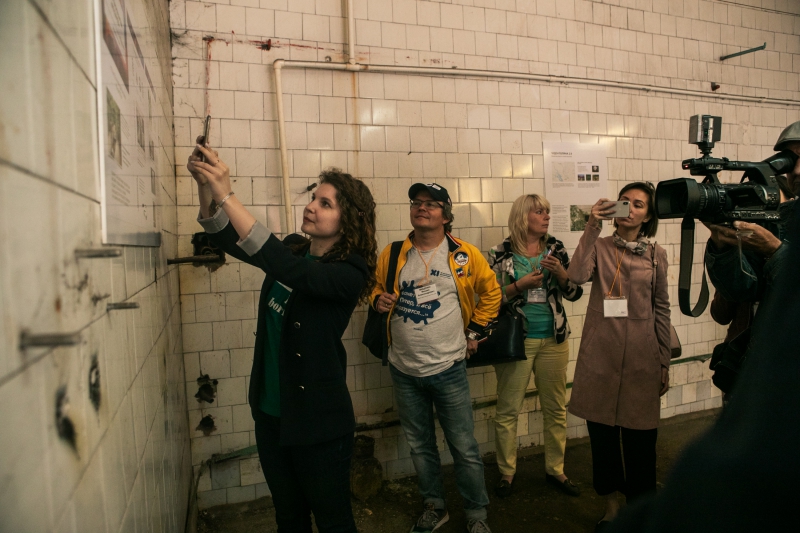 At the presentation of ITMO students' projects at the MOLZAVOD center. Credit: Irina Afanasova

The MOLZAVOD Center of Culture, Art, and Education is a private initiative of the Galactica Group, a dairy products manufacturer. Per their intention, the former dairy plant will be host to an art space in the central area of Gatchina. The project was one of the finalists of ASI’s 100 Urban Leaders Program.

The students of ITMO University’s Art & Science Master’s program visited the area in early June and met with the project’s organizers, who explained the four topics their works would need to concern: the historical and industrial legacy of Gatchina, its relevance, the dialogue among the citizens, as well as between the authorities and business, and the subject of Art & Science, which has so far not been well-developed in the Russian cultural realm. Over the course of two weeks, the students worked on their project concepts alongside the members of Gatchina’s urban communities, culminating in a public presentation of their projects.

“Our goal was to implement a unique, world-class project based on the best international practices. Our partners are some of the biggest names in their fields of expertise. We’re expecting the Kurchatov Institute, in the form of the Petersburg Nuclear Physics Institute located here in Gatchina, to become our scientific partner. On the art side, we’ve already got the support of the State Hermitage Museum’s director Mikhail Piotrovsky and the director of the Museum’s Department of Contemporary Art Dimitri Ozerkov. ITMO University, one of the world’s top scientific and educational institutions, is providing its expertise in the field of Art & Science. Of course, we also have the government’s support, and the Tetra Pak company has also expressed its interest in the project, sending their GR Director for the CIS region to work with us. We’ve also been joined by Mikhail Mishchenko, the director of the Dairy Intelligence Agency (DIA),” says Igor Du, chairman of the management board for Galactica Group.

Due to the planned Center’s focus on the field of Art & Science, its team partnered up with ITMO University, the first educational institution in Russia to launch a Master’s program on this subject. Six students of the program – Svetlana Sidorova, Marta Mikhailova, Alena Koroleva, Victoria Romanova, Yulia Ganchikova, and Anna Pisarevskaya – took part in the Center’s development as part of their summer internship. They presented their concepts first to the project’s owner and the citizens of Gatchina, and later to a delegation from the Government of the Leningrad Oblast, including its deputy head of social affairs Nikolay Emelyanov, members of the government of Gatchina, representatives of Tetra Pak and the Petersburg Nuclear Physics Institute, and of other partner institutions.

Master’s student Svetlana Sidorova presented an educational project called Corpus, which is based on the format of Danish folk high schools. Corpus is designed as a school of free learning, science, and art that’s available to everyone.

“The practice of breathing new life into abandoned industrial venues is one that’s very popular around the world right now. But quite often these projects become less ambitious as time goes on, and their popularity decreases. It’s important to make this a unique project, which is why I propose using the site to launch an Art & Science center that is one-of-a-kind for Russia. The plant has a rich history: before it was a production facility, it was a boarding school for orphans. Its educational legacy is relevant to this project’s idea,” explains Svetlana Sidorova.

Folk high schools exist in many Scandinavian countries, but they are most prevalent in Denmark. Today, they are studied by sociologists from the world over. The origin of these schools was the propagation of democracy, the principles of which philosophers had wanted to instill in the minds of people. The schools were intended for people aged 17 and older who possessed the basic knowledge and wanted to further develop their skills.

There are currently 107 operational folk high schools in Denmark, and anyone, even a foreigner, can enroll in one. Over the years, the schools reduced their emphasis on democratic teachings, but political science courses remain among the most popular. New fields, however, also became part of the curriculum: natural and technical sciences, as well as humanities with a focus on international affairs.

There are no schools like this in Russia. They are places where anyone can come to and learn at without any entrance tests, exams, or grades; all while choosing the educational path they like most. Importantly, it is also a place for people of different age groups to come together and work on various projects.

Svetlana suggests adopting the Danish experience for the MOLZAVOD project and providing prospective students with semester-long vocational education programs that are relevant for people of different ages and will boast a specific set of competencies for each age group (some of the educational tracks may include courses in digital literacy, digital tools, robotics, and humanities). Such a school will be attractive not only to the citizens of Gatchina but those of the entire country. In addition, it will help popularize the ideas of Art & Science in Russia. Those coming from other regions may even stay at an on-site campus.

Students Marta Mikhailova and Alena Koroleva presented their concept for the development of MOLZAVOD’s premises titled “Miracle Glade 2.0” (“Чудо-поляна 2.0”). The project calls back to the Miracle Glade nature sanctuary in Gatchina, located a 20 minutes’ walk away from the MOLZAVOD site and hosting a variety of ancient relict biocenotic organisms that have existed for over ten thousand years.

The two students’ project aims to create a space for the free interaction between the human and plant worlds where the two sides can exist together. As the project’s authors explain, it’s important to create an environment where people can interact with endangered plants, as studying them in labs or from textbooks creates a lack of connection.

Assisted by an expert group of biologists, gardeners, and technical specialists, the students plan to establish appropriate conditions for the growth of rare plant species at various spots of the future center, such as an individual room or several. Marta and Alena also suggest creating an immersion room equipped with display screens that would show the growth process of these ancient plants. Visitors would be able to watch these organisms grow in real time.

The plants’ complete lifecycle will be supported using the global practice of terrarium capsules, which are, in essence, miniature ecosystems. The project’s aim is to transfer a venue that’s often missed by the citizens and guests of the city to MOLZAVOD, bring the visitors’ attention to these unique plants, and interest them in the subjects of biology and the environment.

Student Victoria Romanova presented her project for an interactive installation dubbed the Emotional Decoder, which revolves around the concepts of human emotional intelligence and emotional perception of the world.

The Emotional Decoder is an experiment with the visitors as subjects that evokes emotions and lets people learn about themselves. The participants would be immersed in four different emotions – joy, sadness, fear, and disgust – via their vision, hearing, sense of touch, and sense of smell. The project’s author intentionally rejects the descriptive and employs sensory perception only. Visitors will get to experience each of the emotions and use their senses to see the whole picture.

Victoria proposed converting the four dairy tanks located at the site into special rooms dedicated to each of the four senses. Every room would simulate various options in visitors: for instance, the Vision tank may evoke joy with soft LED lighting, or sadness using a fading lamp.

The project is designed as a collaboration between various specialists: physiologists, psychologists, neurospecialists, designers, and others. In addition, the metrics collected from visitors (visual reactions, psychoemotional reaction to lighting, etc.) using widespread methods may come in handy in future research.

“There is not a single Art & Science museum in Russia; moreover, there is not a single laboratory that works with these kinds of projects. Because of this, there is no accepted approach for observing projects in the field of Art & Science. One of this field’s biggest advantages is that it employs various senses besides our vision. This project’s intention is to help you see just how open and sensitive you are before entering the plant. It’s an emotion check that lets you move forward and experience even deeper concepts,” says Anastasiia Yarmosh, the head of ITMO University’s Art & Science Center.

The student Yulia Ganchikova put forth three ideas at once. The first revolves around establishing a symbol of MOLZAVOD’s openness to Gatchina locals in the form of a stork’s nest made in a realist or abstract style. Per Yulia’s intention, local citizens would be able to use MOLZAVOD’s workshops to create branches for the nest. They would also have the opportunity to shop at charity stores located on-site, with all proceeds going towards the center’s development. This project’s curators would even place the most active participants’ names on the bricks laid into the nest’s foundation. This way, the object would become a public art piece to which every citizen can make a contribution.

In her second proposal, the student suggests establishing a room for dialogue, meetings, and performances by equipping it with rotating mirrors, projectors, and LED lights; together, these tools can adjust the room’s atmosphere to the speaker’s topic. For her final idea, she came up with an exhibition space for works created by the venue’s experts, artists, and scientists, as well as the pieces made by locals during workshops at MOLZAVOD.

The student Anna Pisarevskaya showcased her concept for an AR-based historical quest game titled Find Me. The game is based on four mechanics. Upon entering MOLZAVOD, visitors will encounter a 1880s map of Gatchina along with a legend and some historical background information, as well as a clue that will lead them to the next task. By pointing their phone or tablet at a marker, the visitors can learn about various locations or events from history. A marker located alongside a map of the orphan boarding school, which was located in the dairy plant building in the 19th century, will reveal information about the day-to-day life at the school.

Another mechanism will allow visitors to point their phone’s camera at walls in order to see, for instance, the boarding school’s wall of honor. Geolocation-based features allow guests to visit the former sites of laboratories or production facilities and explore them in 3D, as well as interact with objects in the AR environment in order to learn more about the activities carried out there. This same mechanism will also offer the chance to learn about the production of dairy or the history of wartime Gatchina.

The final feature, called the “portal”, provides a window into the everyday life of some rooms during different time periods. Upon completing the quest, visitors will receive bonuses or promo codes to some of the center’s other events.

Before a final decision on the future center’s concept design is made, the organizers will collect suggestions and ideas from Gatchina locals and then conduct a competition among various architectural bureaus. The final approval for the concept will lie with the venue’s owner, the Galactica Group of Companies. In 2019, the center plans to close partnership deals with institutions that will oversee its main sections related to scientific, educational, and exhibition activities.