Sabrina Merlo – the program director of Make magazine’s San Francisco-based Maker Faire and the producer and co-founder of East Bay Mini Maker Faire – came to St. Petersburg to deliver a lecture to the students of ITMO University and speak about the phenomenon of maker culture. A writer for ITMO.NEWS met with Sabrina to learn more about the Maker's Bill of Rights and how being a maker can be a remedy for depression. 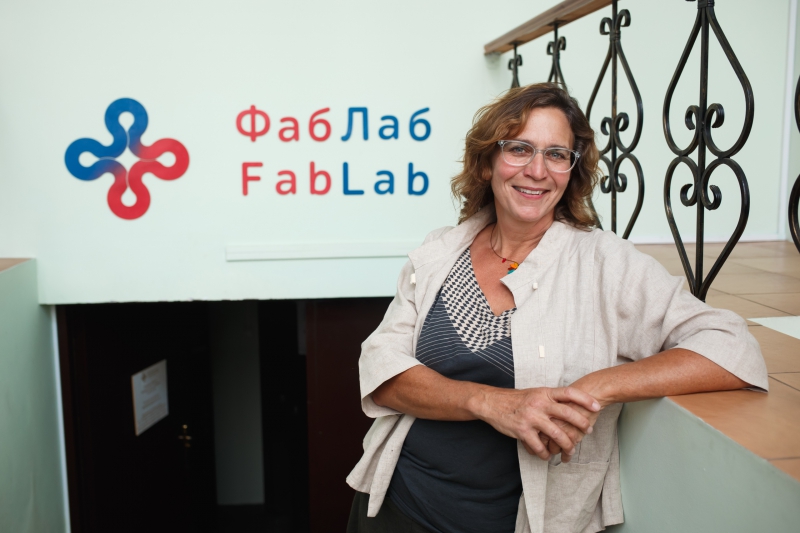 Maker culture, which has already attracted a great deal of followers in the US and Europe, is gradually making its way to Russia. The maker ideology is based on active learning, the freedom to create, and a free exchange of ideas, technologies, and concepts. The American maker community even publishes its own magazine, Make, and hosts the massive festival of science, arts, and engineering Maker Faire. In 2014, the U.S. President Barack Obama even invited members of the maker community to the White House. In early September, a similar festival was held in Moscow.

During her trip to Russia, during which she spoke in praise of the Moscow Maker Faire, Sabrina Merlo delivered several lectures for Russian students. After a meeting with ITMO University students, organized by the University’s own Center for Science Communication and FabLab, she agreed to speak to a writer for ITMO.NEWS:

How does one join the maker movement?

Most people are already makers. At the very least, they make their own breakfast. The way I see it, making is the tool that helps our dreams come true. And we should follow our dreams.

Most young people today, when they want to learn about something, simply log onto YouTube and watch a piano tutorial. Or Google “how to build a kite.” The internet has provided us with many opportunities to take the next step in learning new things.

As for the technologies associated with making, the digital tools that make ideas come true, you can rely on the help of various maker communities, schools, or centers, or universities such as ITMO that have their own FabLabs.

You mentioned in your lectures that many of the makers’ ideas are crazy. Is making more of a form of intellectual entertainment or a serious endeavor that moves progress forward?

I think it can be both. We set up these massive shows where people present some eight thousand items. There’s everything – from personal and humorous inventions to sophisticated environmental protection devices. It’s all very different.

You’ve also said that horizontal communication and equitable partnerships are very important to makers. What makes this such a key concept of the maker culture?

As I see it, sharing information with others is highly important. Such as, for example, telling others how to use this or that device. Innovations are born by way of creative interaction between different teams. They are not born when isolated geniuses sit in their ivory towers. New things come from environments where people share information and experience, where they work together. Innovations are borne of cooperation, often at the intersection of disciplines.

But still, what is making – a hobby or an occupation?

It’s different for every maker. The concept of making, on the whole, is more to do with a cultural attitude. It is not about the contrast between a job and a hobby. For makers, there is a constant environment that spans from entertainment to education to work.

What maker-made invention has impressed you the most recently?

There’s one very impressive project that comes to mind, which is a high-altitude kite designed to produce electric energy. Its inventors come from the making community; they’ve now been acquired by Google. But there are many more examples besides this one.

Is it possible to impose maker culture from the top down? You’ve mentioned that some countries establish special creative spaces that fail to cultivate any semblance of maker culture.

I’ve just spoken to a woman who asked me how we create that grassroots movement, that DIT culture (Do It Together). What I answer is that maker culture is made from new cultural mechanisms and cultural responses.

If an organization or an institution wants to help promote this grassroots culture, there are certain ways to do that.

The Maker’s Bill of Rights exists to highlight makers’ desire to tame technology, to control it, to create instead of being a mere consumer. For instance, we should be able to change batteries in devices, and it’s better to use screws instead of glue.

As a maker, how do you feel about major companies making more products that are intentionally difficult to upgrade, customize, or even repair?

I think it goes against the idea of sustainable development. If we need to solve an engineering problem to make things better, then companies must solve it. But if it’s just an economic model that revolves around producing products with a short lifecycle, then we as consumers need to become smarter. I believe most makers are annoyed by such situations.

But, at the same time, I think that this is one of the things that inspire our community to be creative. Our movement is a diverse and large one. Many people do it just because it brings them joy. Makers are very inventive people, and “inventive” is the key word here. They want to understand how to make things effective and efficient.

So how do makers and large corporations feel about each other? After all, companies like Samsung and Google sponsor makers’ festivals.

It’s a difficult process. In coming to events like Maker Faire, companies like Samsung or Google aren’t just pushing their product. They want to learn. They find us interesting. They want to understand this culture and how to instill that same spirit of innovation among themselves.

Finally, you’ve also said that making can be one of the ways to fight depression and a feeling of meaninglessness of existence. How is that?

There is some interesting research about that. Scientists have written about the mental health benefits of manual work, of making things with your hands. The process itself has a positive effect on our mental state. Besides, the maker community provides a certain social atmosphere of free learning and creativity. All that, combined with the benefits of using your hands and the drive you get from learning, from being able to fix a door or use a drill, is why being a maker is so beneficial.