Everybody Wants a Piece of the Pie: Why Universities Need to Create and Support Innovation

One day – and that day might come very soon – the Earth’s resources will run out, its population will exceed 10 billion and people need to innovate to sustain development. Issues will begin to emerge that can’t be dealt with without innovative solutions. Even today, humanity encounters problems that can’t be solved by conventional methods. Universities become sources of ideas – but how can these ideas be commercialized? How to find investors to support the process of innovation? How do universities retain their scientists and how can scientists get rid of the obstacles on their path to discovery? These were the topics of discussion at an open seminar at ITMO University, given by Professor Manijeh Reyhani – a researcher at the Centre for Entrepreneurial Management and Innovation (CEMI) at the University of Western Australia who has received her PhD in Materials Engineering and a Professional Doctorate in Business Administration (DBA) in the area of research innovation and commercialization. 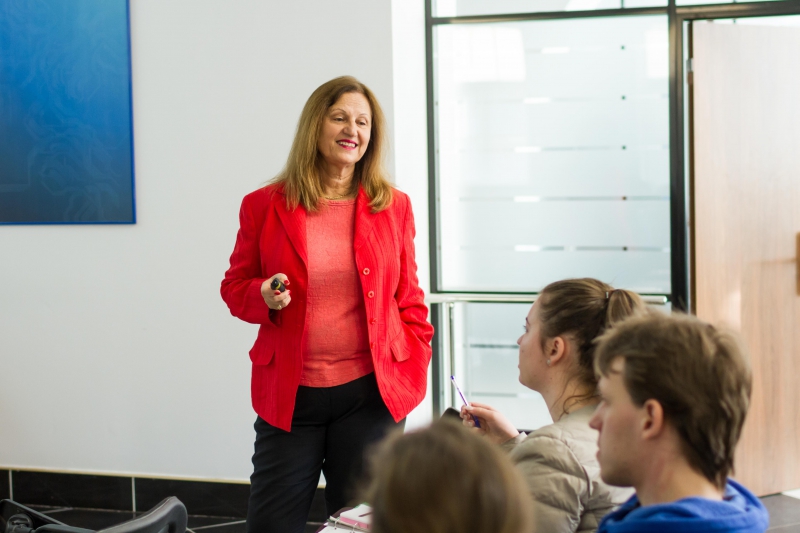 Why do we need innovation?

Innovation is a key driver of development and social well-being. For example, here, at ITMO University’s Biochemistry Cluster, new methods of drug delivery are being created which is a beneficial research for social well-being. In Western Australia, universities benefit from the mineral industry and receive large grants because the mining industry in our country is very well-developed. But everyone realizes that one day we’ll run out of natural resources and funding for these fields of study will cease. That’s why in Australia the National Innovation system and Science Agenda encourages young scientists to conduct research in new areas and create new ideas in prospective fields of science. Besides, society demands innovation. For example, when public transit systems in major cities can’t handle the flow of passengers, experts have to find new solutions to that problem.

Overcoming obstacles on our way to innovation

Henry Ford said: “Whether you think you can, or you think you can't -- you're right”. What does this mean? Does it mean that only our mind can decide whether or not we can achieve a desired result. I’ve always wondered what makes someone a Nobel Prize winner; Is it their genes or hard work? According to Edison, it’s only 1% gene and 99% hard work. How do we become creative or innovative? There’s a financial book entitled “The Black Swan” that poses a theory that all the major historical, scientific and other discoveries happen unexpectedly. Here’s the thing: up until mid-17th century the world had no idea that there were not only white swans, but black ones, too – until a team of explorers discovered a population of these birds in Western Australia. Humans are very limited in their knowledge of the world. But if you assume that something is possible, you expand your limits. We’ve all become used to thinking that an elongated capsule is the most optimal shape for a pill. But what if it’s not? What if the design you come up with is better? It’s important to be open to new ideas. An innovation can be different from what you’ve accustomed yourself to in life, change is a challenge. Environment is also important. If you compare, say, St. Petersburg and the Pacific Ocean, you can’t help but wonder – why have more geniuses been born in the cold cities? Maybe at sea a person is satisfied with going to the beach and catching a fish. And in a cold city, when you spend much time indoors, you have more opportunity to work harder.

What matters most in commercialization is the potential economic gain that would lead to economic growth. What is a system? It is a series of components that work together and produce a result. If there’s no result, there’s no system. A system of innovation results in a new product, economic growth, new services, and sustainable development. For that system to work several key components are needed. One is certainly the people that would create the new ideas. Others are resources and funding for the innovation process. When the developing team expands to a few dozen, management begins to play a crucial role.  Information flows matter, too. Not just for commercial purposes, but for coordinating the team. Later on, when everything is organized, someone needs to create a development strategy. A portfolio system is best used for this. A competent manager would assign this or any other task to whoever can do it best.

Why do universities need to get into commercialization?

The answer is simple: universities need funding. Imagine you’re a scientist. You make an important discovery, patent it and become the number one inventor in the world. Everybody wants to work with you, everybody wants your technology. But if, at the same time, you’re working at a university, then your place of employment also needs part of the benefits from your research. In Australia, for instance, if an external investor wants to fund your research project at a university, the university can lay claim to some percentage of that project’s future profits. For this reason, some universities employ commercial managers, who also serve as negotiators for scientists and investors, helping them prepare contracts and negotiate with the university. These days universities all over the world develop products for further commercialization, but not many know how to do this since it’s an emerging area of activity.

Commercialization models at the universities

One model is the university having a commercial unit. Maybe at ITMO this model is practiced. This is when a university introduces certain projects to the market and makes effort to work directly with companies and investors with the support of the commercial unit at the University. For example: a company comes to the university and says they’re looking for new components for medicine – or anti-aging creams. And the university responds to that request. Sometimes universities pick partners to help develop some internal project. For example, a team of researchers in Australia discovered a method for producing solar energy using every single surface of a building. And now the university they work at is working on a commercialization strategy for that technology, as it has met a high demand. How do you support scientists to work on commercially viable research?

Well, how do the scientists themselves benefit from these projects? Many Australian researchers leave universities to work at private companies because it pays better. What does a scientist get if they develop their projects at the university? The research team may be supported by increased funding for their projects. Industry partners may also support the researchers by informing them beforehand if a particular technology will be popular among investors.

In Australia, to receive government funding scientists need to prove that their research is important for the nation’s development and industry. Innovations in wool manufacturing, for example, are highly valued because it’s a very profitable industry. But what to do when a scientist wants to work on something new that no one in the country has worked with before? After all, I’ve already spoken about expanding one’s limits and looking ahead. Such projects require fundamental research, yet investors have a hard time understanding how theoretical research could be of benefit to them. For that reason, most fundamental research is state-funded. And the more resources a government has, the more fundamental research they can sponsor and the more scientific progress they can stimulate. But even then, a scientist must prove that their theoretical research is justified and valuable to the scientific community. For that, they need to gain that community’s approval – meaning publish some articles in scientific journals. This would serve to prove to the state that the research has potential.