Every January, the US city of Las Vegas hosts one of the world’s largest tech exhibitions, Consumer Electronics Show (CES), which aims to showcase the trends that will define the development of hi-tech in the following year. This is where many corporations opt for premiering their newest releases. In this article, ITMO.NEWS continues the exploration of the ideas presented, from the most cutting-edge to the most gimmicky. You can get another, first-hand look at the exhibition’s display here. 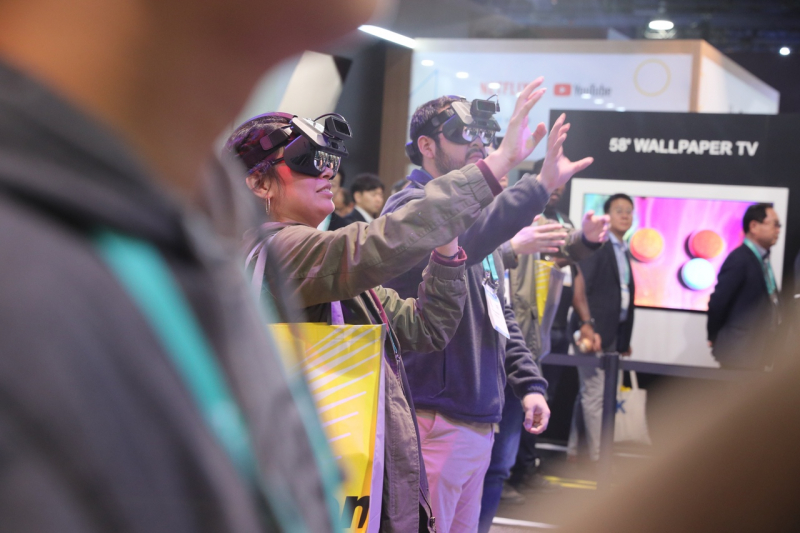 Our society is changing so fast that the technologies that have sometime outridden the economic and social realities are now forced to catch up. It wasn’t long ago in historical terms that electric cars were just perceived as a promising option for the time when the humanity runs out of oil. But now, when ecological problems have become a crucial part of the international agenda, electric cars have become one of the main stars at the world’s various tech exhibitions.

TV was considered by many as an antediluvian medium on its way to extinction, but with its today’s integration with the world’s networks, it seems that the devices are managing to keep consumers’ interest, which elicits a response from hi-tech companies’ engineers.

This year’s, the 53rd, iteration of the Consumer Electronics Show (CES) provided a lot of food for thought, showcasing both avant-garde concepts and familiar technologies on a new stage of development. What they had in common was responding to today’s latest demands.

New transport and its accessories

One of the main events of CES-2020, the news of which reached even those far away from the world of computers and gadgets, was S-A1, the shining new concept of the future’s aerotaxis by Uber and Hyundai. It’s envisaged that going forward, these cars will be capable of moving at the neck-breaking speed of 300km/h, roam 0.5km off the ground, and potentially become self-piloting. Of course, they are to be powered by electric motors. Introduced to the world’s megapolises, the development would not only help to combat traffic jams but also reduce the amount of harmful emissions into the atmosphere.

“We have tried to understand how people live in cities, how they get to places and what their needs are,” says Kenseok Lee, a senior research engineer at Hyundai motor company’s UAM Division. “As urbanization accelerates, traffic and congestion get worse with the growth of the urban population. People are wasting a lot of time on the road, and current traffic systems are not enough to solve this problem. We need a new mobility system, and Urban Air Mobility will take intra-city transportation to the next level.”

Lowering emissions is a concern shared by other car manufacturing companies, who offer different types of electric cars. An electric offroader created with recycled materials and equipped with a solar roof, Fisker Ocean SUV was one of the models that attracted attention. With those who prefer two-wheel vehicles in mind, the company Damon Motorcycles presented its version of the motorcycle of the future. Not only is it able to speed up to 300km/h, but Damon Hypersport HS can also charge from its kinetic braking system and automatically recognize surrounding objects, warning the driver of possible dangers. Also showcasing their electric car just-outs were Sony and Mercedes‑Benz.

In general, electric cars are gaining in popularity, and though they’re still a rarity on the roads (less than 4,000 electric cars were registered in Russia as per the spring of 2019 data), their number is expected to grow in the future. The same can be said about various smart devices for drivers, such as Bosch Virtual Visor, an interactive sun visor than obscures only the section where the sun would blind you.

Surprising for some was the exhibition’s abundance in hi-tech TV novelties. Though it seemed that gadgets and computers would be our only go-to to watch on-screen content, the public’s love for the big screens turned out to be stronger than expected. But there was still some adaptation to the current zeitgeist to be done by TV manufacturers, who were required to show flexibility in the literal sense of the word.

For instance, Samsung’s new display can rotate to 180 degrees, allowing to view vertically oriented content such as video and photos. Another of the company’s novelties is a new generation of 8K TVs that are practically free of the usual frames surrounding the display. The resulting picture looks like a frame-free canvas, with the casing amounting less than 2cm in thickness.

LG decided to daze and confuse with a TV that can be rolled in and out like a projection screen. The rolling mode of the 65-inch OLED panel can differ to suit different needs, going full out for the viewing of games and movies or peeking just above the base stand if the music mode is on. The concept was demonstrated at last year’s CES, but it will only be introduced in shops this year.

A large screen would also enhance working on a gadget, but this deprives them of portability. That’s why it’s no surprise that many hi-tech giants concentrated on finding a win-win solution to this problem. The most obvious, but nonetheless extremely complex solution, is to make the screen foldable.

A whopping three companies presented their foldable-screen laptops at the exhibition. Size-wise, the DELL Ori and Lenovo X1 Fold models resemble books that can be opened and used as tablets. In a half-folded state, they can be operated like small laptops. A similar concept was unveiled by Intel, though this model isn’t currently set for sale. But the overall trend is clear: more and more companies want to expand their range with flexible screens for mobile devices.

One of the most-talked-about novelties is a foldable smartphone by Samsung. Not a lot is known about the would-be sensation, but it’s said that activating a special button makes the device fold sideways, thus doubling its width for an improved user experience.

Things that take care of you

By what has already become a tradition, no hi-tech exhibition is complete without a Smart Home showcase of technologies designed for making routine actions easier or, at the very least, more fun. Emerging as experts’ favorite was a robot helper Ballie. With the size and shape resembling a tennis ball, the small gadgets can independently move around the house, monitoring the state of pets and switching on a vacuum cleaning robot and other devices and just being a dream present for anyone who’d like to have their own BB-8 at their side.

The Japanese company Xenoma presented the concept of smart pyjamas that monitor the wearer’s key health indicators and send a timely indication to family members or emergency services in presence of any signs of deterioration.

By and large, the event was plentiful in the presentations of home helpers, apps, smartwatches and clothes that garner a user’s data for monitoring their health and wellbeing. This sparked a discussion on where to draw a line that the manufacturers wouldn’t cross.

“When we're talking about monitoring, control, this immediately brings up the question of personal boundaries, confidentiality. It’s important to keep a balance here. For example, we don’t install cameras so that users are not watched upon neither in the bathroom nor in the bedroom. The device captures other parameters – the position of the hand, for example, the location of a person in the house. This does not violate someone’s personal boundaries and peace,” shares Satish Movva, founder and chief executive officer at CarePredict, a company that showcased their bracelet for health monitoring.

Laudably, improving the daily experience of people with disabilities is becoming a more and more shared concern among tech developers. Among those presented at this year’s CES, Code Jumper by Microsoft aims to provide visually impaired children with an introduction to programming. As noted by the authors, the device, which has large buttons and handles that need to be connected to each other, will help make first steps in the understanding of how lines of code are created, as well as the recursions and cycles.

Another device, OrCam Hear, allows people with hearing disabilities to better communicate with their interlocutors. This small device can reinforce voices addressing to the user, and even read from the lips. Then, the sound is channeled into a small device installed in the user’s ear.

Board games with a robot

In all this sea of new, it seems that one field – entertainment – isn’t that much on the turn. People still love doglike companion robots and other dinky devices that are just there to please the eye.

Representing the cuteness league at CES 2020 was PuduTech’s table-waiting robot BellaBot. Having approached the table, the droid meows to attract a customer’s attention and give them a cue to order. BellaBot also likes to be pet like a kitten, but after a while, it also dutifully reminds you that it has other orders to attend to.

A special award went to the St. Noire board game by Virsix Games. It would seem that in our high technology era, regular board games with something as unassuming as paper cards would go the way of dinosaurs, but in fact, their popularity is booming – with one explanation being that people like the sense of community that they bring. The innovation of this CES 2020 awardee is that no one would be forced to take the boring role of the presenter: this routine responsibility is performed by a robot helper, leaving human players to enjoy the playing process.