On April 13, Vladimir Vasilyev, the Rector of ITMO University, and Mikhail Vedernikov, the Governor of Pskov Oblast, signed a cooperation agreement between the university and the region’s administration. 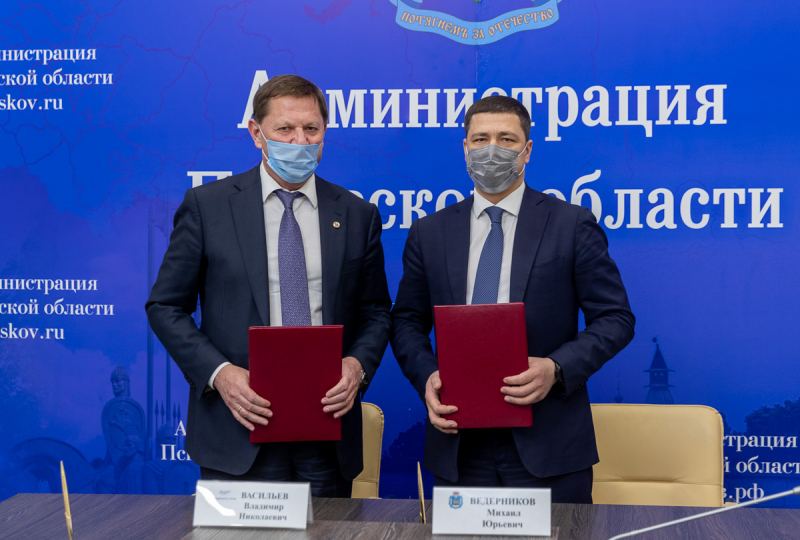 The reason for this agreement lies in the joint implementation of a sustainable development project for the Pskov Region that will be created near the Pskov State Regional Power Station. The project aims to create an industrial facility corresponding to the principles of industrial symbiosis. It will be located in Dedovichi village near the station. The new facilities adopting the advanced technologies and inventions of ITMO University will create employment opportunities and raise the standard of living in the region. The training of highly qualified staff, which would meet the needs of the newly created facilities, was also discussed during the meeting.

Sergey Gastev, a PhD student at the Faculty of Energy and Ecotechnology and the initiator of the project, presented a roadmap for the future project. The administration of the Pskov Oblast, represented by Governor Mikhail Vedernikov and Deputy Governor Ninel Salagaeva affirmed the importance of the idea and expressed interest in its early implementation.

Maksim Evdokimov, Director of the Center for Initiatives of the Agency for Strategic Initiatives, spoke about the economic, environmental, and social benefits of creating clusters based on industrial symbiosis. While Andrey Vintonyak, head of the department for working with government agencies at the Speech Technology Center, talked about the possible implementation of various solutions in the field of information and communication technologies in the Pskov region.

The event was attended by representatives of ITMO’s School of Biotechnology and Cryogenic Systems: Igor Baranov, head of the School, and Daria Mironova, deputy head for projects and commercialization at the School. Among the panelists were the relevant committees of the region, the management of Moglino and Pskov State University.

The meeting resulted in the agreement to establish a working group for implementing the project on sustainable development at the site of Moglino, a special economic zone in the Pskov region.