Resident's of ITMO Technopark and the university's research teams presented their research and inventions at Atria Russia's production plant in Gorelovo. Members of the university's delegation acquainted themselves with the technologies used by the company and discussed potential collaboration projects, including new methods of tagging raw materials and tracking their consumption, inspection of meat product contamination, as well as the use of functional blends. 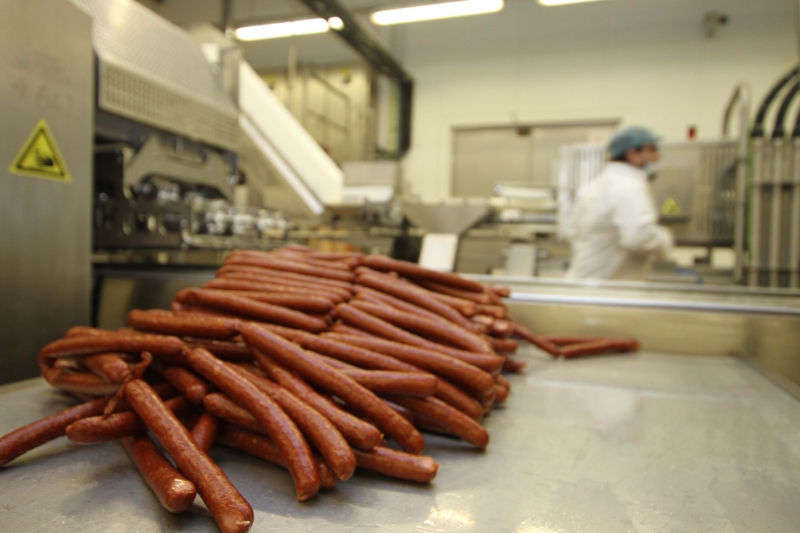 Atria Russia is part of the Atria group of companies - a major meat packer in Finland and one of the leading food manufacturing operations in Scandinavia, the Baltic Region and Russia. The company has two production sites in Leningrad Region; among its brands are Pit-Product, KampoMos, Sibylla and Atria.

"Atria's production sites in Denmark and Finland collaborate with the universities we collaborate with: together, we develop new technologies for improving the products' quality and introduce new solutions for a safer and more advanced operation. Many students work and complete internships at those plants, and the Company is open to cooperation with research centers," notes Mariusz Levoz, Atria's Deputy Director for Production and Procurement.

During the tour of the plant in Gorelovo, ITMO's representatives got to see its meat and poultry production facilities. The equipment and technologies used there comply with best modern standards, which was to be expected, stresses Denis Baranenko, Head of ITMO's International Research Centre "Biotechnologies of the Third Millennium". At the same time, the plant's management is interested in further improvement of quality control, product-line expansion and cost reduction by technological means. "ITMO's Technopark and Atria Russia started to collaborate only recently, in April. Our residents, the Optimal Drive Company, decided to start working with the leading players of food industry and asked for our help. Atria Russia is one of the leaders in this field, so we decided to cooperate. We asked their management to consider the solutions in the field of automation by the Optimal Drive Company and the new defrosting technology by the Food Technologies and Equipment SIE, and got a very quick and positive response.  During our first meeting we've learned that many of our university's representatives also have competencies that can be used in our collaboration, so we've decided to continue with it," comments Olesya Baranyuk, Deputy Director of ITMO Technopark.

The Optimal Drive Company proposed to introduce a new QR tag system. Using this technology will allow to automatically track raw materials consumption on all stages of production. QR tags can also be most useful in product traceability by providing precise information on which raw materials from which batch were used for a particular end product.

The Optimal Drive Company has been working in the software development and production automation field for more than two years already. Since then, the startup has established cooperation with several companies; for instance, they've introduced their odgAssist.Pharmacy automation instrument and their new automation system at one of Russia’s largest pharmaceutical plants POLYSAN. Mikhail Mehrengin, senior research associate at ITMO's Department of Light-Guided Photonics, presented the latest research on spectral-luminescent inspection of meat product contamination. By using this technology, one can detect the presence of pathogenic bacteria on meat's surface over the course of several hours without touching it. The problem here is that laboratory microbiological analysis of raw materials can take up to five days, which is just too long. There are other methods that take less time, but require additional expenses on spare materials.

The solution proposed by specialists from the Department of Light-Guided Photonics implies using only one device. It generates radiation of particular wavelength and traces the reflection spectrum, which is then used to define which microorganisms and in which amount are present in the meat. It is not the bacteria, but their metabolic by-products that are really detected, which is why the device can only detect pathogenic organisms on the raw materials’ surface. Also, to discern different metabolites, the device may need adjustments. Atria Russia's representatives underlined that it is critical that this technology, as any other used in food production, is to be certified by governmental authorities.

By using spectral analysis, one can define the quality of meat that has already being packed. Optical-electronic analysis methods can also be used in dynamic assessment of product quality and composition on the initial stages of production. Thus, one can control the content of dry substances, fats, moisture and even the meat's color, as well as the presence of inorganic compounds which by no means can be present in the end product. What's more, devices for such analysis can be portable, so that technicians would be able to take them to the production lines. The Head of the International Research Centre "Biotechnologies of the Third Millennium" also shared about the new technologies for extending the shelf life of products by using protective food wraps. Special nanoparticles are added into common polymer films so as to decrease microbial contamination. Such technologies are promising for such fields as producing cold cuts.

After negotiations, representatives of Atria Russia and ITMO University agreed on formulation of collaboration proposals, as well as exchanging information on possible sources of financing of collaborative research, including governmental grants for development of new innovative solutions for industry.