The first summer school of the LIGHT4HEALTH project has ended. Students of ITMO University’s Master’s programs Lighting Design and Industrial Design, as well as students of four partner universities have completed the course hosted by the University of Wolverhampton. Students were given five days to learn how seemingly ordinary home lighting can affect people's lives and health from a scientific and practical perspective. At the end of the course all students presented their own lighting projects, which they created with actual living conditions of the UK’s households in mind. 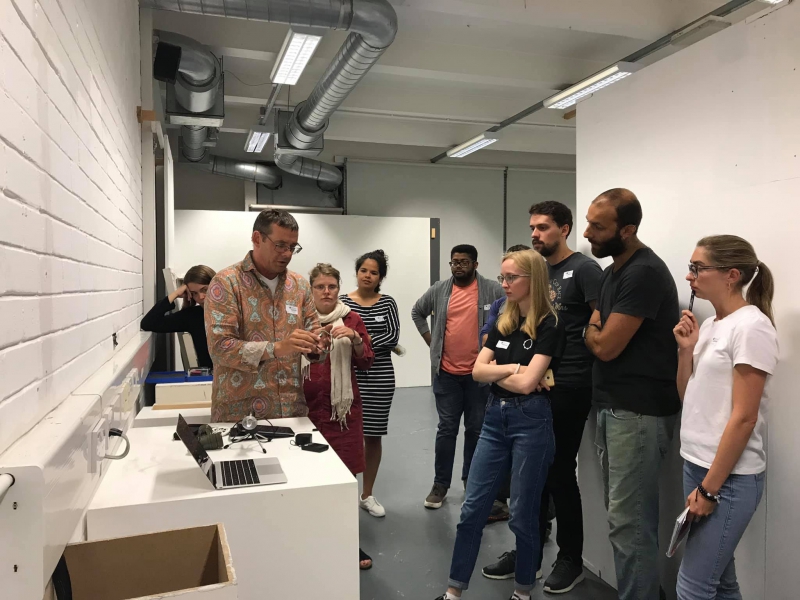 When choosing light fixtures or a lighting system, residents of apartment buildings or detached houses pay most attention to the cost of the equipment, its energy efficiency and design. At the same time, the impact of light on human life and health is the last factor taken into consideration For example, only few bear in mind how light affects sleep and productivity during mental work at home. Rapid development of the technological market flooded with poor quality products, which often lack lighting specifications, makes such knowledge increasingly relevant in the work of a modern lighting designer.

"One of the important factors is the spectral composition of the light source. Each light has its own features," says Svetlana Kolgushkina, a participant of the LIGHT4HEALTH project and a teacher of the Assessment of Perception module (Master's program Lighting Design) at ITMO University. "For instance, the blue part of LED spectrum can be detrimental to one’s melatonin production. The quality of sleep is affected as well if a person is exposed to such lighting for a long time. Therefore, low pulsation coefficient is crucial in house lighting. A setup with different lighting scenarios depending on the person’s lifestyle and evening activity is even better."

The first three days of the summer school were devoted to lectures on the physics of light, perception psychology, the workings of human vision, the potential dangers of lighting, space analysis, effect of light on circadian rhythms, neuroendocrine and neurological processes. At the same time, students practiced their teamwork skills with international colleagues, including faculty staff of partner universities. They measured light levels of the premises, calculated the coefficient of natural lighting, and learned about the flicker effect (pulsation coefficient).

"A single lecture on the effect of light on human health is likely to attract your attention only for a while. A series of lectures and discussions throughout the whole week, with following comprehension of new information will leave a mark forever and make you take this information into consideration in your future work," shares his impressions Hamidreza Eizadi,  a Master's student of the Architectural Lighting Design program at KTH Royal Institute of Technology in Stockholm. "A true understanding of the non-visual effects of light is a very useful skill for a lighting designer. For me, this was the first step towards becoming more responsible  about the non-visual effects of my projects. Moreover, when users ask me about lighting issues in a particular room, I need to possess sufficient knowledge about healthy lighting to answer in simple terms."

Lighting your house the right way

On the fourth day, students were able to put the knowledge they gained at lectures and practical classes into practice. They were divided into four teams and given the task of creating a lighting project. The project was based on a study of the existing lighting of two detached houses, of which the students had to choose one. They had to take into account the scenario of lighting, the layout of light sources, lighting master plan of the entire room, functional purpose of the premises, the requirements for lighting specifications, and how these parameters affect human health. Projects were created either for senior citizens or for young families with children. The choice between these categories was given to students. The projects were presented on the last day of the summer school.

"Our group was tasked with designing high-quality lighting for an elderly couple’s house The lighting system had to be user-friendly, aware of circadian biorhythms of people, lighting scenarios at different times of the day, and the functional purpose of the rooms," says Dmitry Ingi, Master's student of the Lighting Design program at ITMO University.

For example, if an elderly person heads to the bathroom at night, then a certain lighting scenario is triggered. It illuminates the path, but does not stimulate the person’s brain to complete awakening and doesn't awaken relatives in the next room. Furthermore, the authors of the project intentionally exaggerated certain lighting parameters due to eye-related issues of elderly people, who usually experience deviated color perception which can be compensated for by adjusting the spectral composition of the light source.

"Based on the results, each team formed sets of requirements for lighting equipment and its characteristics. It turns out, all four teams requested a new type of LED source with approximately the same requirements, which is not yet on the market," Dmitry Ingi sums up.

The event’s hosts emphasize that the summer school made it possible to gain new knowledge not only for students, but also for teachers through active discussions with students during practical classes. Learning about the approaches of different schools played an important role, and so did intercultural exchange of experience between the nationals of different countries.

"There is no single and unified Master's program in lighting design on the international market. Each university and country represents a separate school and approach to working with the lighting environment and the quality of lighting. Aalborg University in Denmark specializes in daylight. Hochschule Wismar University in Germany possesses  vast research and practice experience in the field of photobiology, light therapy, and the identification of potential lighting dangers for humans. Thomas Jefferson University in the US has extensive experience in working with light in extreme space conditions, for example, when designing lighting for NASA space shuttles," says Svetlana Kolgushkina.

Students were not only able to practice working with light using scientific and practical knowledge, but also got acquainted with the life of a small English town and gain rich experience in intercultural communication.

"In general, there are three interconnected factors that impressed me most: new friends from different parts of the world, the approach to the educational process, and Wolverhampton’s urban environment. Moreover, I had a very valuable opportunity to discuss issues that interest me with teachers and future colleagues, to learn about various points of view and new approaches to implementing ideas. Also, I was able to learn several new words in Greek, try the local cuisine, and also explore British culture in my free time," says Dmitry Ingi of his experience at the summer school.

Spanning three years (2018–2021), the LIGHT4HEALTH project involves the organization and implementation of a series of summer schools, workshops and meetings of the consortium partners aimed at the development of a cross-disciplinary course at the intersection of lighting design and health research. The course will consist of three educational modules: Interior Lighting for Domestic Spaces, Lighting for Working/Educational Environments, and Lighting for Healthcare Environments.

As a result, the course’s learning materials, video lectures, and interactive exercises are planned to be displayed on the project’s virtual platform. Access to the platform will be made open to everyone interested in the project: members of the consortium, representatives of the lighting design community, researchers, as well as students and educators of the project’s associated partners.

ITMO University’s tasks on the project include the organization of the first public workshop and exposition of lighting installations as part of the opening week of the Venice Biennale of Architecture, which is to take place in May of 2020. The topic of the workshop and exposition will be Healthy Lighting for Domestic Spaces. As per the arrangements, the organization of the two events will be conducted with support from Università Iuav di Venezia, an associated partner of the project. The LIGHT4HEALTH project will be held as part of the Erasmus+ Strategic Partnership program.