Second-year students of the Lighting Design Master’s program at ITMO University are named among the winners of Russia’s biggest lighting design competition. Winners received their awards during the international exhibition Interlight Moscow powered by Light + Building. Three projects by ITMO students were included in the top-10 list of interior lighting designs. 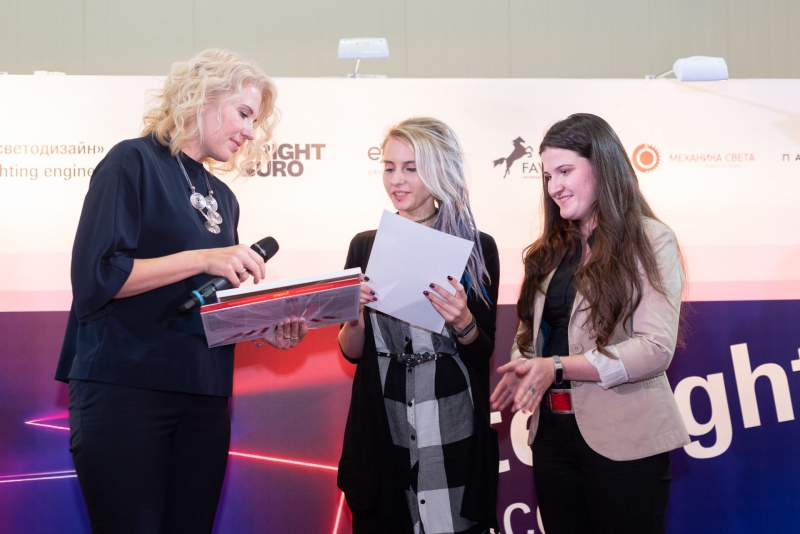 The national competition Russian Lighting Design was first launched in 2001. Today, the awards ceremony is an integral part of the program for Interlight Moscow, an international exhibition of lighting, security systems, automation, and electronics. ITMO University became the competition’s media partner in 2015 but only joined it this year, submitting three concept designs made by Master’s students. Two of them, Daria Vakhrova and Alexandra Lezhnina, students of the Master’s program in Lighting Design won a monetary prize and a certificate for participation in a design exhibition in Paris, France.

The competition’s jury consists of representatives of universities and professional organizations, as well as Russian and international experts on design, architecture and light engineering. Next year’s awards will begin to accept applications from around the world (until now, only citizens of Russia and CIS countries could participate).

This year’s jury was also expanded with a higher number of practicing experts. Categories “Professional Project” and “Student Project” were replaced with “Best Implemented Project” and “Best Design”. Each category is split into three nominations: “Outdoor Lighting”, “Indoor Lighting” and “Light Fixture Design”.

This reorganization increased the interest towards the competition among younger specialists, as it allowed them to compete with experienced teams and have their works noticed by potential employers and clients: architects, industrial top-managers, designers, and government officials. After the awards ceremony, students from ITMO, who won in the “Best Design of Indoor Lighting” category, were approached by representatives of top design companies and the Moscow Oblast’s Ministry of Energy.

Students Daria Vakhrova and Alexandra Lezhnina presented a concept design they developed for their first-year final project. For their subject, the fledgling designers chose the Vyborgsky tunnel, St. Petersburg’s longest pedestrian tunnel 260 meters in length, situated near the Vyborgskaya metro station. The tunnel has eight exits and provides the only path between a residential area at one end and an industrial district at the other.

The project’s main idea is to breathe a bit of fresh air into a plain, closed space, invigorate pedestrians passing by starting their workday, or, conversely, relax them on the way home. To that end, the students decided to replace the old lighting systems with a new one, having developed a unique solution that accounts for the tunnel’s unique structure. Their solution creates a semblance of the sky and moving clouds via controlled dynamic lighting hidden by panels made from polystyrene. The movements, lighting intensity, and spectral parameters can be changed depending on weather conditions: if it’s gloomy outside, the more “cloudy” the lighting within; the speed of cloud movement, too, responds to the current wind speed. All weather data is transmitted to the system using Wi-Fi.

The authors have also developed another feature. According to measurements made by the students, during peak hours there may be up to six thousand people in the tunnel all at the same time. By the end of the workdays, or on the weekends, pedestrian traffic becomes nearly non-existent. It is at that time that the rate of criminal activity rises; according to a survey, this time is the most stressful for passers-by. Daria and Alexandra have suggested embedding each segment of the system with sensors that react to the movement of small groups or individuals. As people pass them, the light becomes brighter, “escorting” people along the tunnel while also letting them know if anyone is coming towards them from around a corner.

Master’s students Irina Ampleeva, Natalia Boikova, and Nadezhda Krauze, too, chose the pedestrian paths at Vyborgskaya for their project but focused on another issue: the eight exits and entrances in the area that become a source of confusion to passers-by.

To solve this issue, the designers suggested implementing light navigation systems using color-coded exits and other techniques. During the day, natural lighting enters the underpass via colorful stained glass above the stairways; during the night, or on overcast days, automated sensors provide artificial lighting. Lighted signs are affixed to walls, pointing the direction towards various exits.

Zanevskaya Square Underpass. Included on the top-10 list in the Best Design of Indoor Lighting nomination.

Students Ekaterina Svyatlovich and Leisian Mustaeva developed a solution for the pedestrian underpass located near the Novocherkasskaya metro station at the Zanevskaya Square. The main issue that they aimed to solve was disorientation: the underpass has a total of 12 exits with seemingly similar signs. The proposed design doesn’t call for any radical change to the lighting; instead, its main idea is the creation of an intuitive visual code based on identifying the nearby points of attraction and their architectural images.

Since the exits are spread out over four main streets, the 12 exits were, too, split equally between them. Based on a conducted survey and a physical count of pedestrian traffic, the researchers identified four dominant sights of each street and designed graphical representations of these objects. To prevent vandalism and, therefore, prolong the lifespan of lighting devices, the authors suggested embedding modular lighting fixtures into the walls.

“Our educational program is based on a strategy similar to that of the Strategic Roadmap 2025 developed by the lighting industry association LightingEurope. We seek to unite the best practices of universities, municipal governments, and the industry to ensure the sustainable development of technology while meeting the society’s demand for energy-saving solutions, human welfare and growing quality of life. Since 2016 we have practiced and developed a problem-focused approach. At its core is the idea of solving relevant issues through the use of a wide range of knowledge, methods, and technologies. We can achieve the best results when we use a single, universal educational process and facilitate mutual understanding and collaboration between an interdisciplinary team of teachers. We’ve been putting together such a team since 2014 and we continue to recruit graduates of our program into this team,” says Natalya Bystryantseva, head of the Lighting Design program.

According to Ms. Bystryantseva, the staff of ITMO’s Higher School of Lighting Design spent a long time finding ways to monitor the educational process in order to be able to course-correct the projects and assess them in all aspects. Right now, both the staff and students use Google Services, Milanote, and Channelkit to coordinate their work. They also hold discussion sessions where the students can exchange their best practices and fill in gaps in each other’s knowledge.

“Before they develop a concept design, students carry out a complex analysis of the location in question. That includes field observations, surveys, foot traffic monitoring, space-time, and morphological analysis, identifying the main points of attraction, analyzing the perception of lighting environment by people and compliance with standards. Then they process all that information and highlight the things that bother them. Finally, they find arguments to support their solution and calculate the costs of upgrades and modifications. Notably, even when they work on the same areas, objects or places, students will propose vastly different solutions," explains Natalya Bystryantseva/

She also noted that this approach has proven to be effective not only at ITMO University. It’s also used, with slight differences, by its colleagues abroad, like, for instance, ITMO's partners at Aalborg University (Denmark), winners of the PLDR Awards 2018 in the field of innovative light design education.