Today, on June 9, 2021, the winners of the prestigious international SABRE Awards were announced. ITMO University’s DIGITAL NATIVE campaign entered the list of finalists for the EMEA (Europe, Middle East, and Africa) region and received the top award in the category Educational and Cultural Institutions. 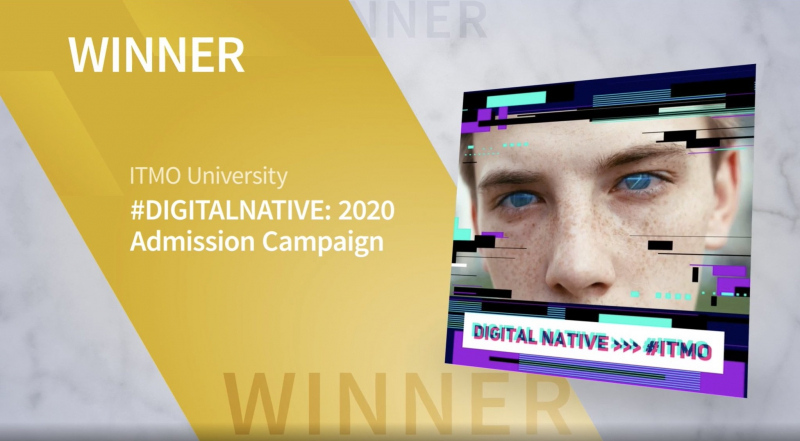 SABRE Awards is one of the largest and most renowned international awards in public communications. A separate competition is held in each of several regions that encompass various nations or continents, such as North America, Africa, Asia-Pacific, and so on. ITMO University took part in the EMEA competition. The winners of each regional contest go on to participate in the Global SABRE Awards.

This year, more than 2,000 applications have been submitted to SABRE Awards EMEA. The projects were assessed by more than 50 industry leaders from the region’s leading companies. The DIGITAL NATIVE project was awarded first place in the category Educational and Cultural Institutions. Out of five competitors in the category, three were from Russia: in addition to ITMO, these are Moscow School of Management SKOLKOVO and the Higher School of Economics. The full short-list for the EMEA region can be found here

DIGITAL NATIVE is the name of ITMO University’s 2020 admissions campaign. Its main idea revolved around online admissions – this was the starting point in the development of its style, strategy, and choice of communication platforms. A focus on the new generation, its values and ways in which it receives information became reason to adopt new interaction formats: Instagram live streams, TikTok challenges, informal quizzes, and so on. The campaign’s success has already been recognized with the Grand Prix of the national PR award Silver Archer.

Not only did the DIGITAL NATIVE project receive the top award at SABRE Awards EMEA, but it was also presented with two In2 SABRE Awards Certificates of Excellence. The In2 awards feature special categories related to specific aspects of the nominees’ communication campaigns or the excellent use of specific tools, especially innovative and digital ones. Each category features a winner, who receives a trophy, and five runners-up presented with Certificates of Excellence. A full list of the categories and winners can be found here.

ITMO University received two diplomas from In2 SABRE Awards: one in Best in Digital Marketing/Advertising, in which the top spot went to Microsoft and the ad agency Clockwork, and Best Overall Use of Social Media & Platforms, where the top spot went to  Burger King UK and the ad agency Coolr. In the latter category, ITMO shared the runner-up spot with Sony and Netflix – quite good company to be in!