Changes at the "Speed of Lightning": International Council Meeting in Brussels Recaps on ITMO’s Two Years of Striving for Excellence

November 11, 2016 in Brussels, Belgium was marked with the meeting of the ITMO University International Council. The reason for nearly 100% attendance of the members is explainable: there’s a lot on the plate. To welcome new members into the IC; rejoice over the exciting fact that ITMO U made it into THE ranking, exceeding all expectations; and decide how ITMO U can sustain great results achieved. Such results are possible due to the performance of the outstanding ITMO University professionals and the thoughtful guidance of the honorable IC members. 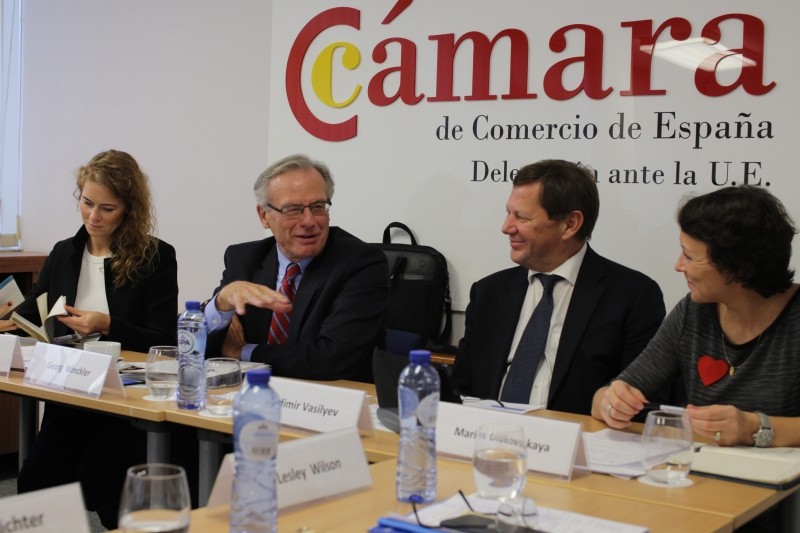 The new Road Map was also a topic for discussion. It is to cover the period from 2017 to 2020 and is to lay out the perspectives for ITMO University development for the next years. It will be based on the Strategic Academic Units, now three. Next year the three SAUs will be enhanced by a fourth companion, centered on Chemistry, soon to be followed by a fifth one, focused on Management, Economics and Innovations.

The IC members made a strong emphasis on the importance of quality assurance in education: the teaching methodology should be regularly updated, to be on the same wavelength as the most progressive universities of the world. Another suggestion that the Council members proposed is to introduce more innovative and technology-driven teaching at ITMO, thus making the studies more interactive, student-centered and efficient.

"It is important that every staff member who stands in front of the students has proper teaching qualifications, and updates his or her skills regularly", said Peter Sloоt, from the University of Amsterdam and the NTU, Singapore. "The staff should be aware that they are regularly evaluated", he continued. November 11th meeting was also special because the Council had to elect the new Chairman of the Council, since Georg Winckler stepped down from this position, having served as Chair for 5 International Councils. The new Chairman of the ITMO International Council became the unanimously elected Debra Stewart, President Emerita and Senior Scholar, Council of Graduate Schools, USA, who said that she serves "on several similar boards, but ITMO IC is the most interesting one". Following the rotation procedure, several new members were welcomed into the circle of IC: Bernd Wachter, Chief Executive, ACA, Brussels, Bernd Huber, President of the University of Munich, Andrew Comrie, Senior Vice President for Academic Affairs and Provost, Arizona University and Jurgen Sanders, Former Research Officer, European Commission, DG Research & Innovation, Brussels. For the first time in two years the IC meeting was attended by ITMO University students. Both IC members and ITMO leadership want to hear their thoughts and opinions firsthand, as well as give students a chance to share the standpoints discussed at the IC meetings with the student society. Sergey Belov, first year master student, majoring in Science Communication, Vladimir Bakhtin, first year master student of Faculty of Information Security and Computer Technologies, Elena Eremeyeva, first year master student at SCAMT laboratory and third-year bachelor student at Faculty of Laser and Light Engineering, Yaroslav Golubev, joined the IC discussions, sharing ideas on what needs to be done to make the student experience at ITMO better.

"Inviting the students to join our open conversations was a novel and unconventional idea, and it turned out to be a brilliant one", said Xi Cheng Zhang, Director of Institute of Optics, University of Rochester. The IC members several times underlined the importance of the 5−100 Project for the development of ITMO University.

"Two years ago, when we first met, I could not believe that ITMO would be able to be at the level it is today. The rate of changes is so quick, they are like the speed of lightning", concludes Debra Stewart. The next meeting of ITMO University International Council will be held in June, 2017, in Saint Petersburg. The IC members are to discuss quality assurance, international support of research, including international grants, the newly introduced fourth SAU focused on chemistry, and continue the discussion on hiring foreign researchers through ITMO fellowship and professorship program. ITMO University thanks the International Council members for guiding us on our journey to #56!