ITMO University hosted semifinals of the Tournament for Two Capitals competition (Turnir Dvukh Stolits). Over 70 teams from schools of Saint Petersburg and the Leningrad Oblast presented their robots. The jury chose the 20 best teams that will compete with young engineers from Moscow on May 13-14. 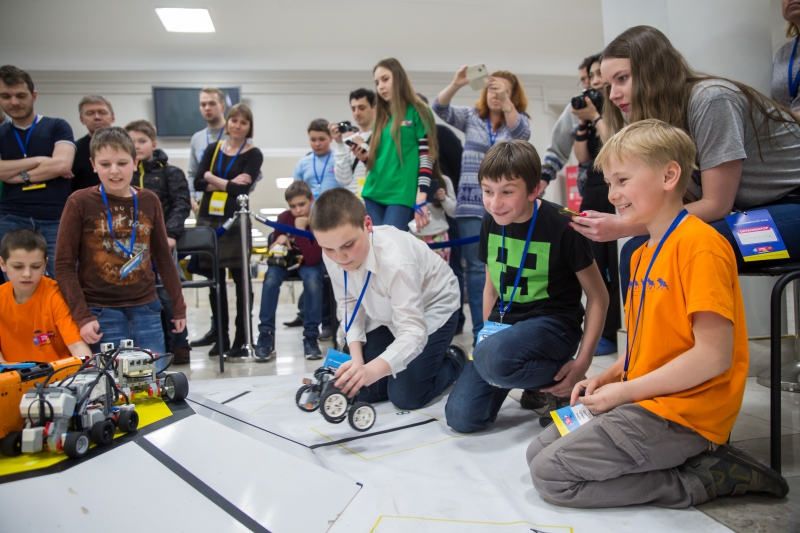 The participants were divided into two groups – the juniors, aged 10-14 who participated in the “King of the Hill” and the “Bridges” tasks and the seniors, 14-18, who took part in the “Racing” and the “Swing Sets”.

According to Alexander Negols, organizer and representative of ITMO, each task has its unique features unusual for robotics competitions.

“We decided to make a famous sumo fighting more effective: we’ve lifted up the stage and increased the amount of robots. According to the rules, they have to climb and then push the opponents from the cliff. This makes the competition more complicated and more interesting,” says Mr. Negols. The Bridges needs two robots – an engineering robot builds bridges above rivers while a “tester” crosses them one by one so as to check that they were built properly.  The Swing Sets also needs two robots – they travel around a multilevel platform and pick up cylinders. Then they put them on a scale – those whose pan is heavier take 1st place.  The Racing can be comparable with Formula 1. According to Alexander Negols, the robots move around the circle and use special pit stop zones to change a wheel or a battery.

Among the participants there were students of high schools, ITMO’s school teams, as well as members of robotics educational centers. The Results of the qualifying round

The jury chose five teams that showed the best results in each task. All the winners will take part in the finals, which will take place in Moscow on May 13-14. The King of the Hill

“I am interested in robotics for five months. I’m going to be an inventor in future. I take part in the King of the Hill task. During the contest we had to modify the robot’s armor and this made  it much more stronger,” says Arkady Shamshin, 10. “I started visiting robotic classes less than 12 months ago. I like this field and especially dealing with computers. My favorite discipline is computer science. I plan to devote myself to this field,” notes Ekaterina Lastukhina, one of the winners of the Racing task.

During the finals the participants of the contests will take part in four tasks mentioned above and the so-called secret task – they will learn its rules right before the competition. This task will test whether the young engineers can modify their robots in accordance with new unexpected requirements having strict deadlines. The winners will be awarded with the prize cup, iPads, gyroscooters and VR-glasses. The high school students will be also given extra 10 points for the results of their Unified State Exam.

The Tournament for Two Capitals is organized by the Educational Committee of St. Petersburg, ITMO University and the Moscow Department of Education.

Unlike other robotics competitions, this contest includes both individual and group tasks. According to the rules, each team has to include one of two participants, a coach and an assistant.