Over the last few days, the 13th Baltic Science and Engineering Competition has been taking place at ITMO. This year you can look at 289 projects by 349 participants from Russia, Belarus and Kazakhstan. Here are some projects made by some of the young talents. 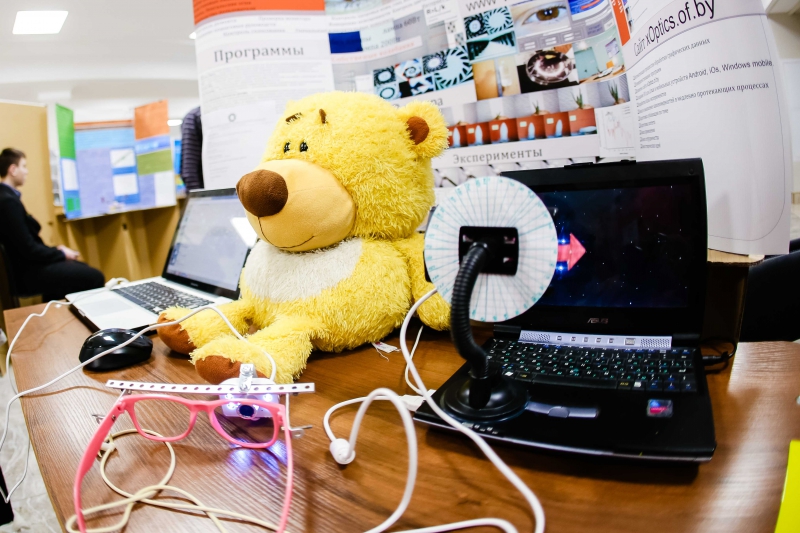 The methods of cleaning up used these days are expensive and imperfect. Artem Starokorov, a ninth grader from Tyumen, thinks that a magnet trap is the most effective thing that can help fight oil spills. To magnetize oil, it is necessary to cover a slick with a ferromagnetic powder, which imparts magnetic properties to oil. To make the powder one needs ferrous oxide. A team of high school students from St. Petersburg is working on a robotic hand, which can be controlled remotely using a 3D sensor. The devices can imitate any movement of a human arm. An operator "shows" what the robot has to do to a sensor. Then a computer analyses it and sends the information to a manipulator using Bluetooth. That is how the robohand acts exactly like a human’s one. A technology for taking care of your turtle

Ninth graders from St. Petersburg made a system for controlling temperature, light and humidity levels in a terrarium for reptiles or tank with fishes. To control an "indoor environment" the young researchers plan to use special sensors, and transfer the information through wi-fi. It gives the owner the opportunity to take care of a pet remotely — the only thing you need is an internet connection. Math systems for a "smart" shower

Here’s a solution for those who want to take a shower at the perfect temperature of water. Fuzzy logic can help forget about the situation when the water is too cold or too hot.

"The system can fix the average temperature when it changes rapidly. First of all we divide temperature values into several sets related to hot, warm and cold water. We also do the same with pressure rates. Then we create a database, which contains "perfect" temperature parameters. The system limits temperature jumps," said Svetoslav Oreshkin. A new solution for irrigation

Drop irrigation is widely used but unfortunately the system is not effective, believes Susana Arutunyan, ninth grader from Samara region. Instead of drop irritation she offered subsurface irrigation, as it saves water and avoids erosion.

"This system is very cheap. To equip a typical greenhouse which is 18 square meters, one needs about 1,000 rubles. It is also possible to regulate watering modes taking into account peculiarities of a cultivated plant," said Susana. How to prevent building destruction?

Maria Kolochevskaya and her sister and Irina, high school students from Minsk, invented a system for visualization of slow physical processes. The system includes web cameras and a special program, which analyzes images to detect even slight deformations. It saves images showing changes and deletes those without deformations. If a building has a split, this device detects whether it goes further or not.

"Using this system one can also observe how plants grow and control other slow processes without continuous shooting," noted the authors of the project. Vladislav Gadalov, a high school graduate from Belarus, presented an idea of new smartphones called AirPhone. Vladislav offers to use remote computing power. Thanks to this system phones don’t need to use their own sources to process video and images as well as run applications. It is also unnecessary to equip the phone with a powerful battery. For these purposes the student made a protocol for remote network control. To treat burns using an app

"According to the statistics, one in four physicians treats burns incorrectly," said Dmitry Donetskiy, eleventh grader from Moscow. To detect a location of burn precisely, a user has to enter data related to age, gender, height and weight of a patient and show the location of burn using a virtual model of human body, which can be turned around and zoomed. When developing the app the student consulted with specialists from Pirogov Russian National Research Medical University. People suffering from diabetes or obesity have to keep special sugar-free diets. There are also other diseases when patients are forbidden to eat sugar. However there is stevia, a plant that is used like a sugar substitute. A team of eighth graders from Voronezh region used it to make a drink for people with obesity. The drink includes cherry juice, stevia extract in the ration of 1 to 20 and some other components.

"The problem of obesity is becoming widespread. Stevia has no calories at all. Apart from that it can be used to treat epigastric burning, hypertonia and other diseases," noted Alexandra Vlasova, a member of the team. Some time after conducting their research projects in the Arctic, scientific groups leave garbage like metal cans and barrels that contain hazardous chemical substances. High school students from St. Petersburg made a robotic cleaner which picks up and press them together like WALL-E did. These projects are only a small part of all ones presented by school students. All projects were judged by several jury groups. They evaluated "research contribution," the quality of engineering solutions and presentation skills. The jury also took into account their ability to market their projects.