The third Hackathon of the largest Russian social network VK was held in St. Petersburg on October 20 to 22. Compared with the events of previous years, this hackathon has become larger: the number of participants exceeded 300, winners could choose from five different areas of software development and the prize fund became one million rubles. The winners were given only 40 hours to develop their application. The winners of the category "Media" - Master’s degree students at ITMO’s Computer Technology Department Victor Khovansky and Evgeniy Varlamov (Team Traffox) - spoke to ITMO.NEWS about their software Neon and how it helps community managers monitor incoming content. 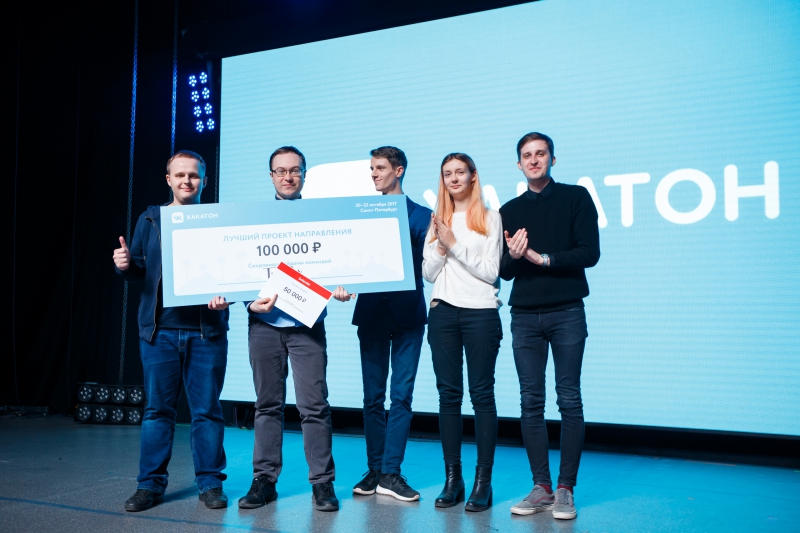 In total, 400 people applied to the  VK Hackathon in 2017 - and only a 100 reached its final stage. The VK team provided participants with a choice of case studies from partners, including the State Hermitage Museum, Tinkoff, the UNESCO Institute, Selectel, the State Tretyakov Gallery and other organizations. ITMO’s team chose the category "Media": the students chose the news-focused case by Lentach (a well-known VK-based news page - Ed.).  The main problem of any well-known public page is the huge stream of content offered by its audience, which one has to analyze manually now.  Most of the content sent (pictures or links) can not be used for publications. However, the page’s moderators and editors take a lot of time reviewing this content.  That's why the Lentach team offered the participants of the hackathon to create an automated filter - an application for processing incoming news.

"We chose the category "Media" because it seemed to be the most interesting and promising one in terms of further development of the project. In fact, it would be difficult to develop all other cases regardless of the Hackathon’s context. And our project could be continued after the competition: it is relevant for all media," - Victor Khovansky explained. Within 40 hours, Victor and Evgeny developed the Neon application - an automated filter for all the incoming content of the publication.  The application performs the task set by the Lentach team and also includes additional perks.  For example, the project employs machine learning to sort newsworthy events into categories. The application can easily identify the general tone of the news (positive, negative or neutral) and is able to identify the topics (politics, society, the world, military, economy). The application uses about 30 categories overall.

"We realized that since this is a case declared at the VK Hackathon, we won’t be the only ones to choose it. Therefore we needed to be radically different from other projects. Most of the projects, according to our forecasts, were going to focus on design - this is the conclusion we made from our former experience at other hackathons. Accordingly, we needed to come up with some kind of "killer-feature" to impress the jury. Moreover, we needed to invent something which other teams could not copy. We'd spent about a third of our allotted time on developing that feature - machine learning with the ability to break down news by category. The thing is that, in machine learning, it is difficult to come up with something from scratch. Typically, developers use standard frameworks. But if we chose a well-known method, our results would not be impressive. This is why we spent a considerable part of our time trying to elaborate those methods that already exist. We took the classical algorithms and improved them to fit our task. The rest of the project work was much easier," - the students explained. Neon being presented at VK Hackathon

Machine learning also introduces another function: prediction of the number of “likes” and reposts. According to the developers, if the issuing editor publishes the proposed news practically unchanged, then they will have an approximate figure of likes and reposts of this post. The application also provides anonymity to those correspondents who prefer to remain unknown. It even has a system of royalty payments to the best authors without any commission.

"Incognito mode provides the submitting users an opportunity to conceal their identity. There is a rating of people who send the news in the app. We have come up with a system of royalties for the best news offers in order to motivate the news senders to send more interesting news hooks. Thanks to this, the Lentach community can keep track of who has worked their way up the rating, and pay best authors some rewards. In the incognito mode, however, a person can send some interesting topic, but in that case they will not participate in the general rating," - said Evgeny Varlamov.

Among other things, the application has a convenient admin panel. It contains a feed of incoming news and allows one to filter all these pieces according to various criteria: by date, by processing status, by category. One can also see the status of any automatically filtered news with a detailed description of the reasons application rejected it. In addition to all mentioned, a mobile version of both the administrative and the user part of this application was developed. This way, news-writers can publish interesting news hooks directly from their mobile phones, and the editors can check them even if they are away from the computer. However, not only the content of the application turned out to be relevant - its appearance also meets all the modern requirements. Neon, according to the idea of its authors, should be designed in neon tones and have the reference to the 1980's. That is a key “ingredient”, especially when everyone is so affectionate towards vintage. The team continues to work on the design of the application.

This hackathon was dedicated to the applications of different VK communities , so the main task of developers was to create an application for a particular community. All of these applications are stored in the official directory of the social network , which now contains 15-20 applications. VK aimed to expand this catalog.

"We presented our project using a VK page. We created a test community and placed our application in it. There were two jury teams - the VK jury team and the jury team dealing specifically with the “Media” category. We used a live example to show how the application works and simultaneously presented it. And we added an interactive feature to our presentation - the jury could add their own news via Neon and then see how the application filtered this news by categories and chose the right characteristics for it in real time. For example, the application recognized that the proposed news belonged to the category “Politics” and that it was related to Russia," - Victor Khovansky explained. The developers are now finalizing the application; after that it will be placed in the official directory of applications for communities at VK.

"We are currently in touch with the Lentach team. We receive their advice, suggestions and sometimes technical assignments. Discussions also take place sometimes, as our overall goal is to develop an application for a wider audience, that is, for the many communities that could use this tool. We have already come to a general consensus, and the application will be launched in the coming weeks," - the developers explained.

The Traffox team won the category "Media" and received a cash prize of 100,000 rubles, as well as a certificate from the hosting provider Selectel.