Winners of National Competition to go to RoboCup Asia-Pacific

The RoboCup Russia Open robotics championships was held for the third time, in Tomsk, where 118 teams from 11 regions in Russia participated. For three days, from 13 to 15 April, at the site of the national stage of world robotic championships RoboCup, various robots competed: lifeguards, football players, actors. The school team of ITMO University participated for the first time in the category Humanoid KidSize Soccer League (university level) and took first place. 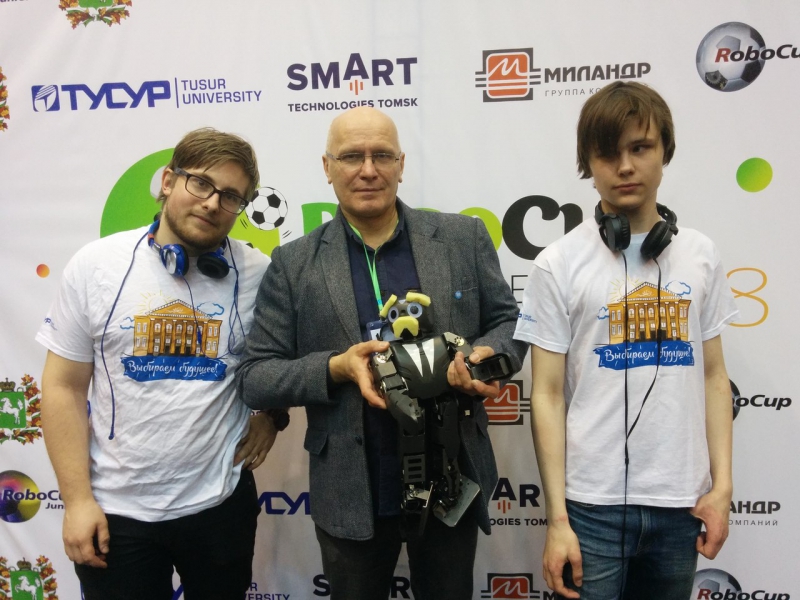 It was the first time that the school team of ITMO University participated in a competition for robot football players. Earlier, the team led by the head of youth robotics and teacher of physics and mathematics at Lyceum № 239, Igor Lositsky won prizes in the “On Stage” category, which allowed students from the youth robotics laboratory to show their creative element. So, we have already written about robot Seldon, who not only won the ‘stage’ at several international championships but was offered the role of government official.

The category for robot football players is usually divided on the basis of the age and size of the participating robots. Within Humanoid KidSize Soccer League, in which the team of ITMO University participated, “kids” – small size humanoid-robots kick the ball on an improvised field. These, for example, include DARwin. As Igor Lositsky says, they just had such robots and three weeks before the event they decided to compete with the strong university teams in robot football in Russia – teams of Tomsk Polytechnic University, TSPU/TUSUR, TUSUR/BMSTU.

“We purposefully participated in the student category, although in the composition of the school team. During the RoboCup Asia-Pacific in 2017 we talked with the organisers of the youth stage of the championship. They said that we have nothing to do in the junior group, we should go further. We decided to try it,” argued the coach.

It should be noted, that football among robots is far from the dynamic spectacle which we are all used to. However, the organisers of RoboCup put a goal that by 2050 they want to outplay humans in football with a team of robots. At the moment, robots move quite slowly when they try to kick the ball, and sometimes they frankly get ‘stuck’ on the task. As Igor Lositsky tells, this year the organisers decided the robots will play with a real multi-coloured ball. It is a seriously complicated task for the teams, as usually robots are programmed to a bright one coloured object, for example a red ball.

It took three weeks to prepare two Darwin-robots (goalkeeper and striker) for the competitions at the ITMO University school team consisting of Daniil Nechaev (school No. 122) and Alexander Tulpanov (laboratory of continuous mathematical education). During this time, the guys reprogrammed robots for a serious match and thought through the tactics of the game.

Despite the fact that the team of ITMO University, who came to Tomsk with the support of Lyceum №239, replaced the usual "creative" category for a more rational one, the high school students approached the performance at RoboCup Russia Open in a non-classical way.

"We decided to add dynamics to the sometimes very slow process of the game in robot football. So, while our robot striker aimed at the ball to kick it in the direction of the opponent's goal, our goalkeeper danced. Also our forward has a firm kick “Brosok Kobry”, which was brilliantly implemented in penalty shootouts in Tomsk. We do not disclose all the cards yet, but so far I can say that for this kick we nicknamed him Conor McGregor,” Igor Lositsky says.

Together with the militant Conor and the goalkeeper-dancer, ITMO University school team will perform at RoboCup in the Asian and Pacific region, which will be held in October on the island of Kish (Iran).