A team of Russian school students helmed by coaches from the country’s leading universities has won four gold medals becoming best in the team event at the 2019 International Olympiad in Informatics (IOI). In IOI’s individual event, Russia’s Ildar Gainullin posted the world’s second-best result. One of the most prestigious computer science competitions in the world, this year’s Olympiad is being held on August 4-11 in Baku, Azerbaijan. 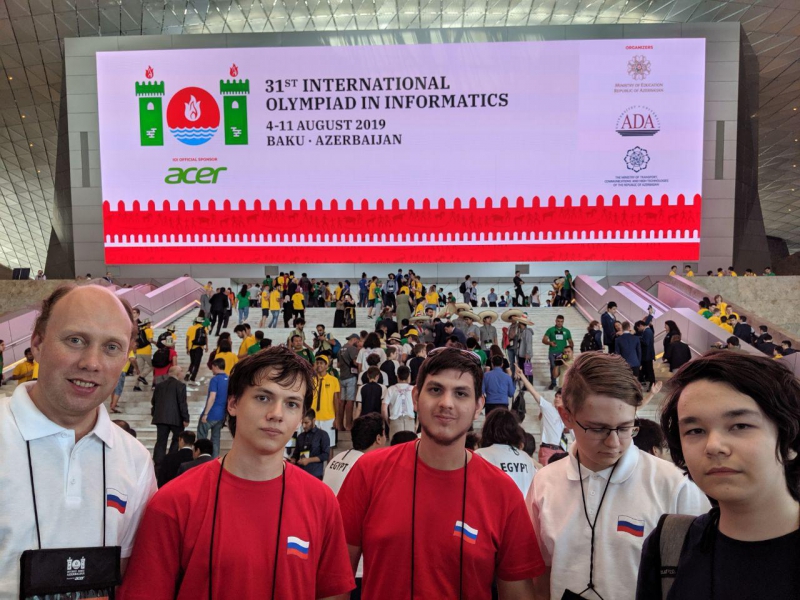 Russian team at the 2019 IOI. Credit: The competition's organization committee

IOI is an individual competition, attended this year by 331 school students from 88 countries of the world. Russia was represented by four participants: Ildar Gainullin, 11th-grade student at the Lobachevsky Lyceum of Kazan Federal University; Alexander Morozov, a graduate of the Presidential Physics and Mathematics Lyceum №239, St. Petersburg; Vladimir Romanov, a graduate of Moscow State University’s Advanced Educational Scientific Center; and Egor Lifar, 10th-grade student of the “Intellectual” school in Moscow.

“The team’s great results should be credited to not only the coaches who trained them for the competition, but also to their personal mentors in their home cities,” highlights the Russian team’s leading coach Andrey Stankevich. “Vladimir Romanov and Egor Lifar are pupils of Elena Andreeva, the head of the Informatics Department of MSU’s Advanced Educational Scientific Center. Many of her students are past IOI medalists; also, it is she who coaches Moscow State University’s team, who for the past two years have been holding the ICPC world champions title. Alexander Morozov, of the Presidential Physics and Mathematics Lyceum №239, trains at ITMO University; my colleague Pavel Mavrin and I have been working with him since he was in 5th grade. Last but not least is Ildar Gainullin, who’s shown the best performance on the Russian team and studies at the Lobachevsky Lyceum of Kazan Federal University; playing a huge role in his development have been world programming champions, ICPC Cup holders Pavel Mavrin and Niyaz Nigmatullin, both of whom work at ITMO University pursuing a lot of joint projects with Innopolis University in Tatarstan.”

As noted by Olga Vasilyeva, the Russian Minister of Education, in her congratulatory address, the yet another victory secured by the Russian team at the International Olympiad in Informatics is not only a success of the students and their coaches, but also an indication of the development of the Russian programming and IT training system.

“From as early as the first years of elementary school, students all over the country participate in specialized classes and lessons that immerse them in this field, allowing them to fulfill their talent and potential”, commented the minister.

The Olympiad is held in two five-hour rounds, each consisting of three tasks participants need to solve. In 2019, they were held on August 6 and August 8, respectively.

Approximately half of all participants are awarded medals, sixth of which are gold, third silver and one half – bronze. The exact number of medals for each year is determined on the basis of voting by the delegations. The results of the fourth member of the Russian team place him on the border between the silver and the gold medals category; the final decision on his eligibility for the gold medal will be made by a vote on Saturday, August 10. The award ceremony will be held on the same day.

The selection and training of the Russian team’s members took place at the Moscow Institute of Physics and Technology. In November and May, training camps were held, with 20 participants chosen according to the results of the All-Russian Olympiad for School Students and other competitions. In November, they secured 11 gold medals at the 10th International Autumn Tournament in Informatics in Shumen, Bulgaria. The final national team line-up was determined based on the results of the four qualification rounds and the 2019 Asia-Pacific Informatics Olympiad  (APIO-2019).

Following the results of last year’s IOI competition, held in the Japanese city of Tsukuba, the Russian team finished in the 4-5th place, sharing it with their Belarusian counterparts; the school students won two gold and two silver medals. At the 2017 Olympiad, the national team’s tally was made up of one gold and three silver medals.

The Russian sports programming training tradition is famous all over the globe. The community includes not only talented school students but also university students, regularly crowning the results table at ICPC, the world’s largest sports programming championship; Russians have been winning the competition for the last eight years. For the second year in a row, the 2019 tournament was won by the team of Lomonosov Moscow State University. But it’s ITMO University’s team that holds the world record in the number of ICPC victories, having won the contest seven times.