On September 27-29, the Russian city of Kazan hosted the final round of the Digital Breakthrough competition for IT specialists, designers, and managers in the field of the digital economy. This event was included in the Guinness Book of Records thanks to the record number of participants. Among the winners were ITMO University students: Kirill Pugin, a student at Information Technologies and Programming Faculty, and Valeria Timofeeva, a Master’s student at the Faculty of Technological Management and Innovations. In this interview with ITMO.NEWS, the students share about the competition and their plans for the future. 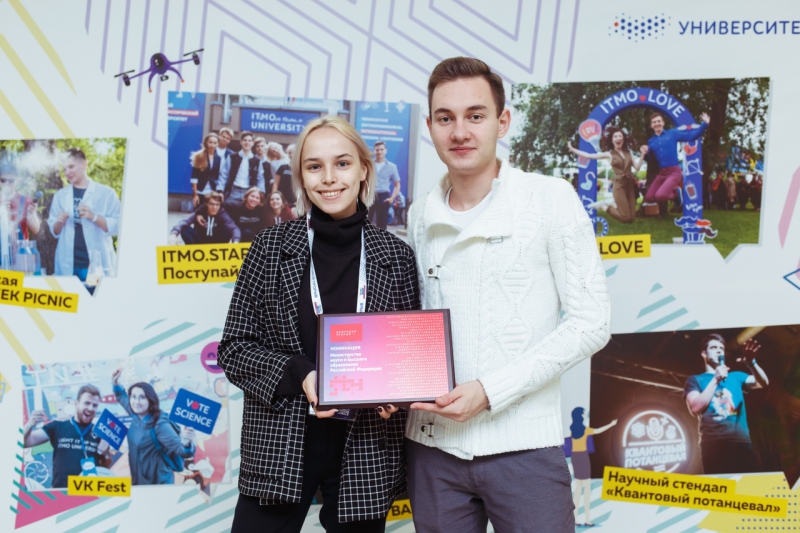 Digital Breakthrough is a competition for IT specialists, designers, and managers interested in digital economy. The regional round brought together over 3,000 young specialists from 77 Russian regions split into some 600 teams. In the course of 48 hours, they solved tasks in five categories: Education and Science, Healthcare, Public Administration, Housing and Urban Environment, and Transport and Logistics, as well as in special categories provided by the competition’s partners. Their progress was evaluated by 120 jury members. In parallel to the main competition, Kazan also hosted a hackathon for school students, which brought together some 500 school children from Tatarstan. The prize fund of the competition amounted to ten million rubles.

How many teams were there from ITMO University?

Kirill: A total of four ITMO University teams participated in the competition: three teams from the Digital Generation club and one from the Mobile Development club. We were given 48 hours to solve all the tasks. Two teams, including ours, made it to the final round, and we decided to join forces.

It so happened that Valeria’s team paid a lot of attention to the design and business model of their project, while we focused mainly on blockchain and machine learning technologies. After we realized that our approach was less appealing to the jury, we decided to hand the technical part of our project over to Valeria’s team. Together we perfected the design and made a presentation. Valeria was responsible for the business plan, adaptation, and scalability, and I was responsible for all the technical aspects of our work.

What was your project about?

Valeria: We developed a crowdsourcing platform for socially important projects, which would allow for organizing a centralized collection of material aid. The main criteria were transparency, manufacturability, and openness.

Have you ever participated in such events before?

Valeria: This is my first competition of such a scale. We were given certain tasks and immersed ourselves in 48 hours of happiness: without sleep, but with lots of energy drinks and food.

Kirill: This is my first hackathon where I was a participant; before that, there were about ten hackathons where I was an organizer, an expert, including the hackathons organized by our Digital Generation club. After our victory in Kazan, the Megafon company offered us to organize a hackathon at ITMO specifically for them. We plan to do this at the end of October. Our victory in Kazan proves that ITMO is one of Russia’s leading universities, which means that many companies now want our students and managers to join their teams.

Kirill: On behalf of the Digital Generation club, we discussed the opportunities for cooperation with the Central Bank, Megafon, MTS, and Kazan Technopark. These companies offered internships for our students. So we’re now helping our students get ready.

Valeria: As for me, when I joined ITMO on September 1, I couldn’t even think that in some 30 days I would win a hackathon, start planning my trip to Skolkovo and become a member of the Digital Generation club. So in two years, I want to become a millionaire, and I think that ITMO University has everything one may need to achieve this.

Why are you going to Skolkovo?

Kirill: We’re going to participate in the Digital Generation forum, which will be held there. In the summer, we won a grant and are now gathering all the leaders in the field of the digital economy from different universities; of course, the majority of the experts will be from ITMO University. Apart from that, we will invite investors and top managers of big companies. Our club moves to the federal level, which is quite an achievement. As for my personal plans, I want to become the chairman of ITMO.Students. The election will be held on October 16. In parallel to that, I will also help students in our club get internships, win hackathons and gain professional competencies.

Tell us a bit more about the club.

Kirill: The Digital Generation club was created about a year ago. It was initially designed to help students adapt to new technologies in the Students for Students format. Now it mainly focuses on events for PhD students who already work at various companies. The club’s meetings are held once a week and include lectures, workshops, foresight sessions, and project sessions.

Is it for IT specialists only?

Kirill: No, in our opinion, everyone should master several disciplines, acquire several competencies. For example, I’m an IT specialist, but I’m also a project manager. The main idea of our project is to give students practice-oriented skills.

Valeria: Our club is definitely not only for programmers. I study at the Faculty of Technological Management and Innovations, but I am a history teacher by my Bachelor’s degree. My experience is a good example of the fact that it is not necessary to be an IT specialist to participate in the club’s programs.