Cold and Soaked but Happy: Participants About Bike Ride With the Rector 14.0

Eight years ago, ITMO Rector Vladimir Vasilyev headed the first-ever ITMO bike ride, which has become a beloved tradition of all members of ITMO.Family. Twice a year, in spring and autumn, ITMO students, graduates, and staff gather at one of St. Petersburg’s parks to ride side by side with the Rector, meet new friends, and, of course, take a group photo. ITMO.NEWS talked to some of the participants of the 14th bike ride to learn what they think about the initiative and how often they ride bikes. 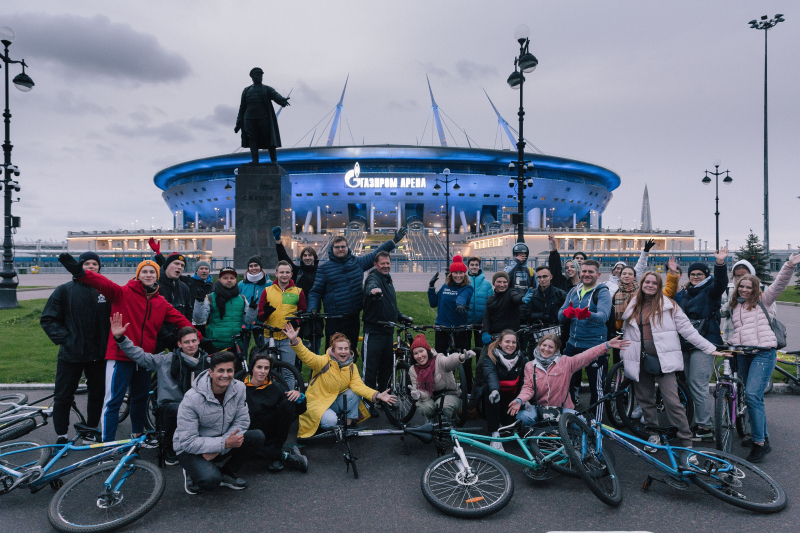 Rain or shine, about a hundred people on bikes or scooters come together for the traditional bike ride every year. Like before, the weather didn’t scare away the fans of biking. Participants set off from the Maritime Victory Park to the 300th Anniversary Park enjoying the picturesque views of Gazprom Arena, the Gulf of Finland, and the Lakhta Center.

Head of the Media Office

I’ve never participated in the bike ride before, only saw a post about it on our social media once. I decided to join this year because I think it’s a cool way to bring such a unique company together. Especially since we don’t hang out outside work that much. Plus, it’s probably the last time I can hop on a bike this year. I do have one but I don’t ride it often. I’m not really keen on solo cycling just for fun.

Manager at the Recruiting and Internal Communications Office

I joined ITMO just a month ago, so it’s my first bike ride. It’s such a cool idea! I was over the moon when I learned about it from my colleague.

It’d be great to have many more events like this one. When we are at work, we always talk about our tasks, and this is our chance to get together and have a nice chat about something other than work. These kinds of events make us closer!

As the academic year has just kicked off, everyone is extremely busy. Bike rides are an awesome way to just relax, laugh, and unwind, especially on gloomy days like today.

The cold didn’t stop me. I knew I could just dress warm, and I didn’t even care about the rain. I love cycling but I don’t have my own bike yet. The last time I was on a bike was a year and a half ago, so today was an important day for me in many ways.

Third-year student at the Faculty of Infocommunication Technologies

It’s my second time joining the bike ride. I was here in spring, too. I help KronBars with their Instagram, so it’s also part of my job. This is a great exercise. Usually, I don’t cycle much because I live in a dorm and have no place to store it.

It’s great that people gather to ride alongside each other. Even though it rained a lot last time, many people came anyway. I believe that this tradition is extremely important. It brings ITMO.Family closer. While you’re riding side by side, you might start a spontaneous conversation, meet someone new, or even find friends.

Third-year student at the Faculty of Information Technologies and Programming

I’ve never missed a bike ride over the years that I study at ITMO. It’s a lot more fun to ride with a company. And I ride all over my district a lot but I need a good reason to do it on Krestovsky Island.

I enjoy the initiative. I remember it was pouring when I was on my first bike ride but it was still a lot of fun. Such events let teachers and students stay in touch.

This year, as usual, I came on my scooter. I love scootering to places. I wasn’t afraid of the cold. Although scooters aren't at their best in cold weather, the temperatures are still above zero. And I definitely had enough layers – I’ve put on my thermals, jacket, and gloves, so there was nothing to worry about.