Who Are You? We Are ITMO University: ITMO Holds 15th Bike Ride With the Rector

On a warm spring day, ITMO students and staff came together for the traditional bike ride with the rector. Over 50 participants cycled the nine-kilometer route around Primorsky Victory Park, Yakhtenny Bridge, and Park of the 300th Anniversary of St. Petersburg. Join us for a recap of the event. 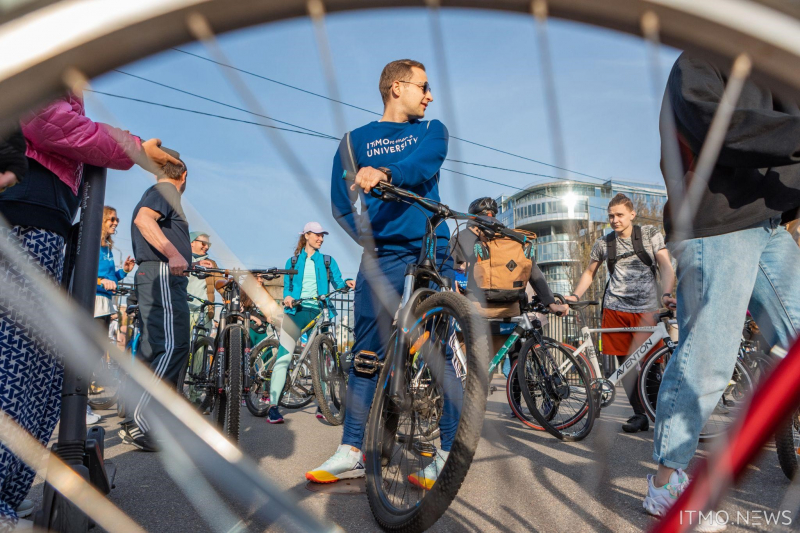 As the time neared the planned start of the ride, many ITMO students and staff members gathered at the entrance to Primorsky Victory Park. The bright crowd of cyclists immediately attracted the attention of all passers-by, who wanted to know what was going on and how they could join in, too.

Bike rides are a long-standing tradition at ITMO, with the first one having been held in September 2014. Since then, the event has taken place biannually, in spring and autumn. This May saw the 15th bike ride – and perhaps it was in honor of that occasion that the weather that day was exceptionally warm in contrast to the rest of the month.

ITMO Rector Vladimir Vasiliev headed the procession, while the morale of the cyclists was supported by KronBars mascot Tim the Snow Leopard. If you high-five Tim at the starting line, you can be sure it will be a great ride!

…and newcomers, joining the ride for the first time. No regrets!

The ride is always popular with students as a nice chance to have some rest, recharge, and open your mind to new ideas.

Tim the Snow Leopard, of course, has his own opinion!

This time, the participants had to cross Primorsky Victory Park to reach Gazprom Arena, one of the key points of the route, where they took a group photo. Then, the route lay over Yakhtenny Bridge to Park of the 300th Anniversary of St. Petersburg.

There were obstacles along the way, the first one being the steep ride up Yakhtenniy Bridge. But those who overcome it get to enjoy a swift long ride down its other side.

The way was easier, of course, for those who chose electric scooters as their means of transport.

Still, the majority of participants upheld the tradition by renting bikes specifically for the event.

Due to the ongoing renovations at the Park of the 300th Anniversary of St. Petersburg, the participants had to cycle up a sand hill.

For that, they were rewarded with the perfect view of Lakhta Center.

Having enjoyed the setting sun over the Gulf of Finland, the cyclists turned back to the starting point.

The fountain season has just launched in St. Petersburg, and our participants had the chance to feel it as they rode through the breezy spray in the Park of the 300th Anniversary of St. Petersburg on their way back.

You can’t just pass these stunning views without taking a picture!

The route concluded near Gazprom Arena. Another traditional group photo, and then it was time to say goodbye – until next time!

By the way, ITMO has its very own cycling club. Join in!