Rain or Shine: A Look at ITMO University’s 11th Bike Ride with the Rector

It seems that rain does not scare fans of biking at ITMO University. Despite the dismal weather, dozens of students and staff members turned up for the biannual bike ride with the University’s Rector Vladimir Vasilyev. Those who took part in the ride shared with us their favorite routes and impressions and explained why rain made this year’s event all the more special. 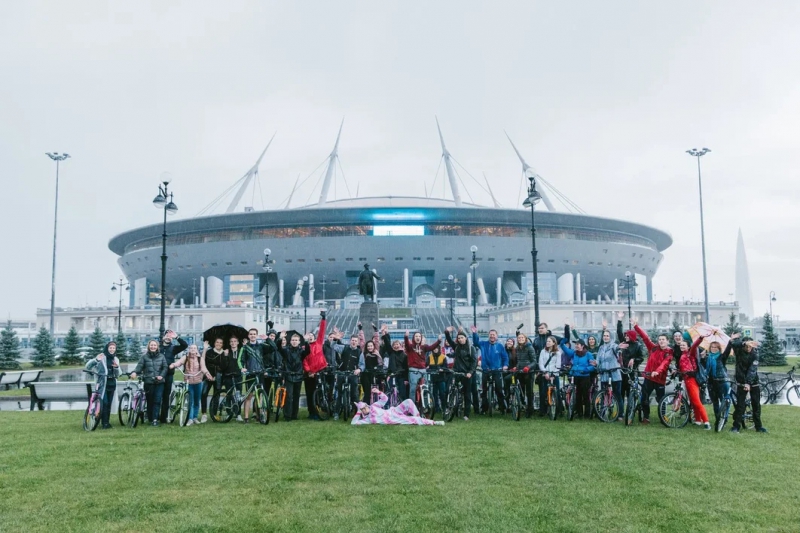 Participants of ITMO's 11th Bike Ride with the Rector

This is far from my first time here. I think I may have only missed a couple rides in all this time. This was the wettest ride I’ve been to, but that didn’t spoil anything. Everyone was positive and having fun, and that’s the key. When I left home in the morning, I realized I’d need to dress warm. And kigurumi (Japanese onesies that resemble animals or fictional characters – Ed.) are pretty warm, so I came dressed as a unicorn. I only ride my bicycle for leisure, like here or after work when the weather is good. The Yuzhnaya road has a good view, and there’s a new park about to open near Novokrestovskaya metro station. I think this part of the city, with its modern architecture, roads, and views of the sunset is the most suitable for biking. Just gotta wait until they take down all that fencing around the stadium.

Polina Morozova, first-year student of the Faculty of Photonics and Optical Information

I wasn’t scared of the weather. See, I got a lucky ticket. The KronBars Sports Club had a contest and I got to use a rental bike for two hours for free. I came to St. Petersburg from Khabarovsk, so I don’t have a bicycle here like I did back home. From what I’ve seen so far, St. Petersburg is a better place for that kind of activity; my hometown is built on three hills and getting around on a bike is less easy. Here, the terrain is flat and there are lots of parks. I can’t ride yet, but I’m already looking into routes.

Valery Chernov, third-year student of the Faculty of Control Systems and Robotics

This is my second time at the Bike Ride. I really enjoyed this one, and the atmosphere was even warmer, precisely because of the rain. Besides, this time around I came with a friend who also studies at ITMO. I was able to get her out of the routine and unwind together. I honestly don’t ride a bicycle that often in the city; I prefer to walk. When I do ride, I prefer to do that on Vasilievsky Island, where the roads are not very busy. Another good route is from Krestovsky Ostrov metro station to the Buddhist temple near Elagin Island; there’s even a bicycle parking area there!

Since I’ve started working at ITMO, I took part in four Bike Rides with the Rector, this being the fifth. If I’m in town on that day, I always come. This year’s ride was particularly inspiring because of the rain. It’s great to see how despite the weather, this motley crew of students, teachers, and staff (and even their kids!) with our Rector in the lead went biking under pouring rain. I have a compact Strida bike, which makes riding in the city really enjoyable, but I still lack time to do that. I always bike to work on the day of our ride and rack up around 30 kilometers in distance! I’d like to give a special shout-out to the route: picturesque and with the Yakhtenny Bridge as an obstacle – just how we like it!

Evgenia Loginova, first-year student of the Faculty of Photonics and Optical Information

I live in the suburbs of St. Petersburg, so I didn’t bring my own bike and rented one instead. Truth be told, the rain kept me doubting whether or not I should go. I signed up a long time ago, but the weather was a surprise. In the end, I decided that since I’d already set my mind to it, I had to come, and I don’t regret that. I love biking. My favorite route is far from the city center, in the suburbs. I love to ride along the Gulf of Finland and watch the sunset – it’s beautiful!

This is not my first time at the Bike Ride, but this time was spontaneous. Because of the rain, my friend and I decided to get a two-seater rickshaw bike with a roof to protect us from the elements. Speaking of which, the ride was really fun and dynamic despite the weather, and most of us learned how to ride in pouring rain. I don’t usually ride in the city, rarely even. There are a few reasons. Firstly the weather, which in St. Petersburg is rarely suitable for a bike ride. Secondly, there’s a lack of bicycle paths. The ITMO ride’s route is perfect since it is not only picturesque, but the road quality and landscape are perfect for an event of this caliber.