Flugtag is a festival of creativity, engineering and, naturally, flying -  or at least trying to. Its participants create improvised flying machines, and boost them from a high pier into the water; the main condition is that they can only use muscle power as their "engines". And though the flight distance is among the assessment criteria, it is by no way the main thing: most of the machines ended up in the water soon after leaving the take-off strip. What's a lot more important is their appearance, the participant's performances and just having fun. Read more about Red Bull Flugtag-2017 in ourarticle. 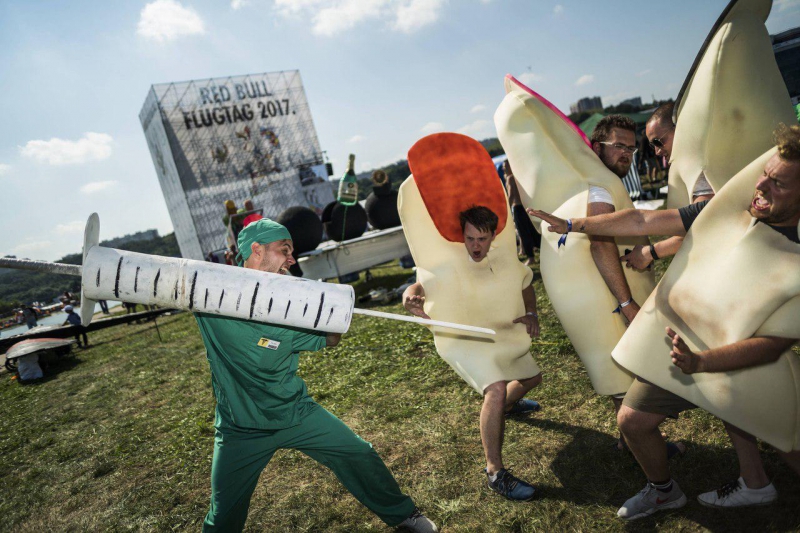 According to Bogdan Dugalev, the decision to take part in the challenge was made spontaneously. He's been working for ITMO's admission committee when his friend who worked for Red Bull in St. Petersburg approached him and told about Flugtag. That wasn't long before the end of the registration deadline, yet ITMO students got fired up, and gathered a team right on the spot.

"We wanted to participate in the festival as we thought that it would be fun, yet we also wanted to show that our university is cool! Not many universities can boast having taken part in such an event," explains Bogdan.

The students turned to the Strategic Communications Department for help, and Alexander Gostev, one of its staff members, proposed to design the flying machine as a paper plane launched by five "fingers" -  the team members.

"We pursued minimalism. We had to launch the plane, so we decided to make a big paper plane. Easy, maybe even too easy, yet no one came up with the same idea," shares Alexander. The team spent two hours making the blueprint and sent it to the qualifying round. Hundreds of applications are sent to the festival, and the finalists are chosen by open vote. This year, 42 teams with the most original projects made it to the finals that took place in Moscow on August 13. ITMO's “Big Fingers” team was amongst them.

The plane was assembled in the courtyard of ITMO's building on Kronverkski avenue. The team members got support from the university and could buy all the necessary materials. According to the rules, the plane had to be made of unsinkable and eco-friendly materials, its weight being less than 200 kg and size less than 10x10 meters. The Big Fingers decided to use timber for their plane.

"We couldn't assemble the plane and transport it to Moscow due to its size, so we brought it there in parts. We worked on the plane ourselves, without anyone's help, using common nails and other building materials. We also made finger costumes from foam rubber," shares Fedor Barbarin, one of the team's members. At first, the Big Fingers tried to calculate the plane's aerodynamic properties, but then bailed and decided to focus on creativity, as most of the machines at the festival fall into water soon after taking off.

According to the students, they didn't even have time to assemble the plane and test it before going to Moscow. In fact, they had to take the bus to get there, as there were no train tickets left. After coming to the festival, the Big Fingers registered at the reception; each team member got his position - a pilot, an engineer, etc.

"Everything was connected to the “flying” theme, it was great atmosphere. We even had mini-airports, and each team got funny stickers saying things like "Left to get some spare parts" and the like", says Alexander Gostev. After registering, the team members assembled their plane for the first time - to find out whether it was reliable or not some two hours before the launch.

Actually, reliability was an important concern -  not all of the projects at Flugtag make it to the pier. For instance, the Suprematism Plungers team members "plunged" their machine so hard that it fell apart in the sky. The Natural Overkill team that created an artificial dinosaur and dressed as dinosaurs almost missed the ramp, and their pterodactyl hanged from the pier, almost having showed the first negative result in Flugtag's history.

"If we compare the Flugtag in Russia with the festivals in other countries, it seems that people gather here to just have fun and don't care much about winning. In other places people create real flying machines which cost a lot; here, we focus more on creativity and performances. The world's record in flight distance is more than 70 meters, and in Russia it is just 19 meters," comments Boris Dugalev. The jury assesses not just the flight's distance, but also the machine's design and the performance the teams show before the launch. Also, if the machine breaks while taking off or misses the runway, the participants can carry it to the pier and just throw it into the water. The usual comment to a machine's fall right after the start is something like: "Well, everything went as usual".

Each team was given two minutes for the performance and take-off. According to one of the participants of ITMO's team, the time spent on the pier went fast. First, the Fingers did a small show by filling the runway with smoke. Pilot Eldar Urmanov, who was the lightest of the team, sat on the plane's nose. His team started to push the plane towards the water.

"The presence of a pilot is one of the requirements. Actually, before getting to the pier it was a bit scary. Yet, when we got to the site, the fear was gone. What's more, there were many rescuers at the festival, and even teams of divers who were ready to help the pilots in the water.  After falling, I had to stretch a hand upwards - to show that I'm alright. When I swam up, I first couldn't see the sky because of my costume, which was a bit strange," comments Eldar.

ITMO's paper plane didn't beat any records, but just fell into water, as with most of the other machines. Yet, it still flew six meters. Right after the plane fell, the Big Fingers team members followed it into the water. The Noskoplan (Sock Plane) team got third place - they assembled a biplane that looked like a sock. Half of their plane broke off, yet the pilot succeeded in catching the wind and flying 19 meters. The second place went to the Squadron of Flying Hussars from Tver who did a marvelous show before the launch and designed their machine after a bottle of champagne. Finally, a team from St. Petersburg got first place. The Hot Brothers did a grand performance and presented a flying machine in the shape of a fire truck. By the way, this team participated in Flugtag for the third time. The Big Fingers team will be filmed for the Red Bull Flugtag documentary that will be shown on the 2x2 channel this September. The film will tell the stories of the most unusual teams.

"The atmosphere at the festival was great, everyone helped each other, communicated, made friends. Everyone worked as one: both participants who brought expensive planes and those whose planes were hand-made. For instance, one team sent the parts of their plane via the Russian post service. Naturally, the parts didn't make it on time, so they had to create their machine from scratch. That was very fun. We will definitely participate in the next Flugtag, as well," comments Alexander Gostev.