From August 16 to 22, Yagodnoe Camp hosted the third All-Russian Patriotic Sports Camp "Almost in St. Petersburg", organized by the Association of Student Sport Clubs of Russia, the Caskad special training center and ITMO University's KronBars sports club; the event brought together representatives and heads of student sports clubs, press centers and student athletes from all over Russia. In the course of one week, the camp's participants could test their strength and willpower in a unique program prepared by the camp's organizers. 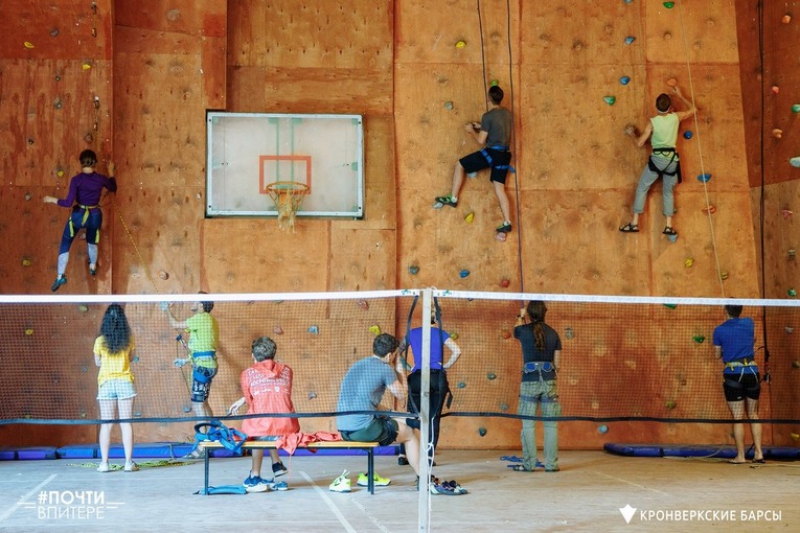 "15-20 kilometers through forests and swamps, speed-lighting a fire, diving for hints, crossing lakes by swimming and everything like that - it was great! We didn't even feel tired after all of that. Participation in the "Almost in St. Petersburg" camp is the best thing that ever happened to me!" states one of the seven hundreds posts in Instagram dedicated to the camp.

This year, about 40 people, both professional athletes and amateurs, participated in the camp.The participants were split into three teams - Vympel ("pennant"), Cascade and Alpha; each team could choose to focus on either sports management or sports journalism. According to Evgeniy Raskin, Head of KronBars sports club, this year the organizers paid a lot more attention to teambuilding, and dedicated a whole day to it. "Thanks to the new teambuilding program, the participants could already present their artistic performances during the event's opening, even though usually they do it towards the camp's closing, when they’ve already gotten to know each other and learned to work together. This time, however, they bonded after having spent some 24 hours together, and were ready to perform as soon as on the second day of the camp," comments Evgeniy Raskin.

The team curators were ex-servicemen, staff members of the Cascade training center. Each day, from 8:00 till 00:00, participants carried out various tasks. The camp program included educational, sports, patriotic and recreational modules. The educational program included six lectures devoted to different aspects of sports management. Denis Chekanov, head of the St. Petersburg Student Football League, shared about the fundamentals of student sportsmanship and organizing sports events with minimal resources; Aleksandr Chernousov, head of the organization’s press service, spoke about the growing influence of social networks on sport. Egor Mukhanov, Deputy Chief Editor of StudentSport.ru, explained how to promote an event, and Dmitriy Rusanov, head of the ACB Management School, spoke about the methods of effective management. For the sports module,organizers conducted the Outpost - a game which included elements of orienteering, sports games and quests; the final challenge was a swim across a lake. Among other sports events were competitions in football, volleyball and basketball, as well as a multisport competition which included rock climbing, canoe paddling and the like. Aside from taking part in sports competitions, the camp's participants also got the opportunity to improve their PR and journalism skills by covering the camp's different events, as well as take part in various workshops where they could learn first-aid skills, rock-climbing, knotting and the like. Just as in the previous years, the camp program also featured its traditional Capture the Flag Competitions". On a particular night, each team had to stay outdoors to nurse their campfire and guard the flags placed nearby; other teams were to capture the flags and put out the fire. For an entire night, everyone in the camp was up as the camp's organizers and staff members of the Cascade center tried to capture the camp, while the three teams grouped up to defend it. This year's new feature were the special projects - each team had to create a calendar for the camp, a video presentation of the team and conduct a social survey among the camp's participants. For instance, one team tried to find out from which end people tend to peel a banana, and another conducted a survey about which sports activities they prefer. By the end of the camp, it was team Cascade that became winner by getting most points in all of the modules. According to the organizers, teams Vympel and Alpha also showed great results.