International Volunteers at Yagodnoe: Results of the Ecological Raids Camp

On August 3-17, the Yagodnoe sports and recreation center hosted the annual camp Ecological Raids, which attracted volunteers from Germany, Italy, Spain, Palestine and other countries. Together, they cleaned rubbish off the center’s territory, beautified the space and learned more about each other’s homelands. This has been the fifth time that Ecological Raids is organized, by efforts of ITMO University’s students. Here is more on the international volunteers’ expressions and this year’s camp. 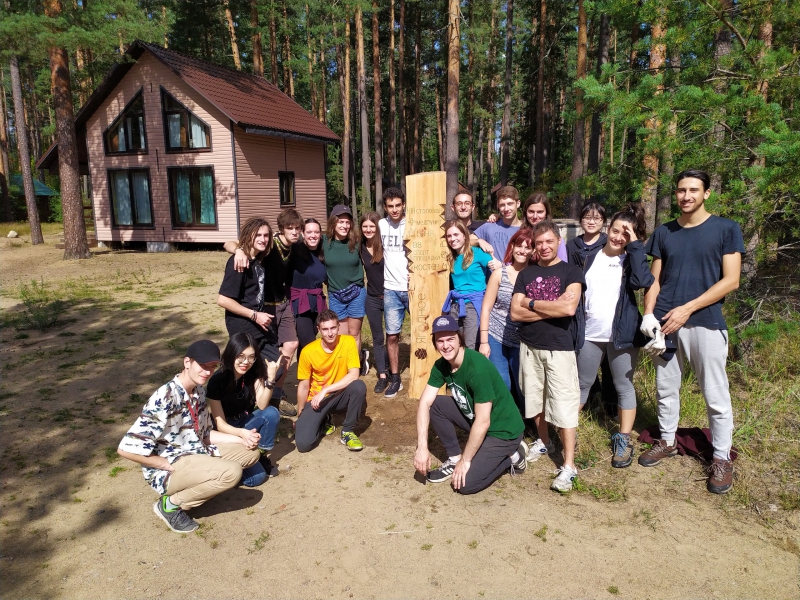 Participants of the 2019 Ecological Raids

Ecological Raids is a camp that offers participants food and accommodation in exchange for performing various environment-related tasks. These tasks don’t require any specialized knowledge and most often revolve around cleaning and beautifying the territory of the Yagodnoe sports and recreation center, where the camp is hosted. Having done their work for the day, participants can spend time together and explore the picturesque nature around. Playing a special role in the implementation of the camp are organizers: they oversee the entire process and help find a common language between the participants, volunteers, and the venue that commissions their work, the Yagodnoe sports and recreation center.

Over the five years of its existence, Ecological Raids has already changed its focus several times. As explained by one of the camp’s coordinators, ITMO University PhD student Ilya Bokatyi, first participants would focus solely on cleaning the territory off the rubbish that had amassed over the years because of tourists coming to the area for a weekend and leaving waste-filled pits behind. The volunteer’s efforts allowed to reduce the amount of rubbish left on the camp’s territory, which left to a shift in the camp’s activities. Last year’s Ecological Raids was predominantly educational, with the organizers focusing on the popularization of the eco-friendly lifestyle. The lectures and workshops held as part of the camp gave participants an opportunity to familiarize themselves with ways of lowering the negative impact on the environment caused by human activity.

2019 brought in another shift in the camp’s central focus, with more work on the beautification of the Yagodnoe center being included in the agenda. Volunteers built benches, set up new wooden pointers and conducted zoning activities without disturbing the area’s natural landscape. One of their main tasks was to make the area more convivial: natural and well-kept at the same time.

“Thanks to the clean air and close proximity to nature, working at the camp is more akin to rest,” says one participant, Amir Salim, from Palestine. “Six hours of outdoors work just couldn’t be more different from eight hours spent in an office. You can clear your head off petty worries and instead calmly reflect on life and communicate with people from different cultures. Ecological Raids is a great example of how caring about the environment and leading an eco-friendly way of life can bring different people together.”

This year’s Ecological Raids was attended by 20 volunteers from all over the world: Germany, Italy, Greece, China, the Czech Republic and other countries. Helping the coordinators in their search for participants is the company Sfera; its partnerships with the European volunteer organizations EVS and ISEC allow its specialists to quickly liaise with volunteers from different countries.

The camp’s participants usually are young people of 18-20 years old, but sometimes there are older and more experienced volunteers attending. The project’s coordinator, Master’s student in Lighting Design Olga Rybkina says that they are as enthusiastic, driven and active as their more junior counterparts.

“In 1991, I partook in an international volunteer project in Russia, it was dedicated to the beautification of a park in the city of Pushkin,” shares Marlis Haase, оne of this year’s Ecological Raids volunteers from Germany. “I have been there recently and didn’t recognize a thing, everything has changed that much. Some of the changes are positive, some less so. For example, I didn’t like how many fences and enclosures there were. On the other hand, there are much more people, tourists and shops now than there used to be. Speaking about Ecological Raids, I’ve been surprised by how great a role the university plays in the volunteers’ work. Another pleasant discovery was that students and staff of ITMO University have access to such a nice place as Yagodnoe to rest and recuperate.”

The impressive diversity of participants prompted the coordinators to make alterations to the way activities are planned. While their previous approach was to make a clear-cut schedule filled with a host of different activities, this summer, they attempted to share the areas of responsibility between the participants, so that each could make their individual and unique contribution to the common effort.

This was the approach organizers Olga Rybkina and Ilya Bokatyi discovered at a special educational camp SCI (Service Civil International) in Germany last year. In the course of a week, they learned how to develop group activity, solve conflicts and organize free time. It is there that the students realized the advantages of the free style they consequently adopted, which allows for more flexibility, making changes when necessary, and taking into consideration the desires of others so that everyone would do what they like most.

“Actually, it’s really cool when 20 people from different countries come together, spend two weeks with each other, and then don’t want to leave and part ways,” shares Olga Rybkina. “Going forward, I want to create a map and dot the places the locations of people I’ve met thanks to the camp in these four years, and then organize a tour and visit them all. Making friends with people from all over the world is amazing, it allows you to feel part of a global community, to understand that people, though different and unique, all have a lot in common. You can find common ground with anyone, and the world, for the most part, is open. It is this openness and desire to be a citizen of the world, and not a separate state, that motivates me to organize the camp.”