Rain Falling Upwards and “Critique of Pure Reason”: a Guide to “Gatchina Lightnights”

On August 10-11, Gatchina will host the Lightnights international festival of light art. 37 art objects designed by artists from Russia, Belarus, Germany, Italy, and Finland will be presented at the festival. Master’s students from ITMO’s Department of Creative Lighting Design will also take part in the event. Rain going upside down, rethinking of Kant’s Critique of Pure Reason, and many other stunning art objects by designers and architects from all over the world. Don’t miss out on the fun! 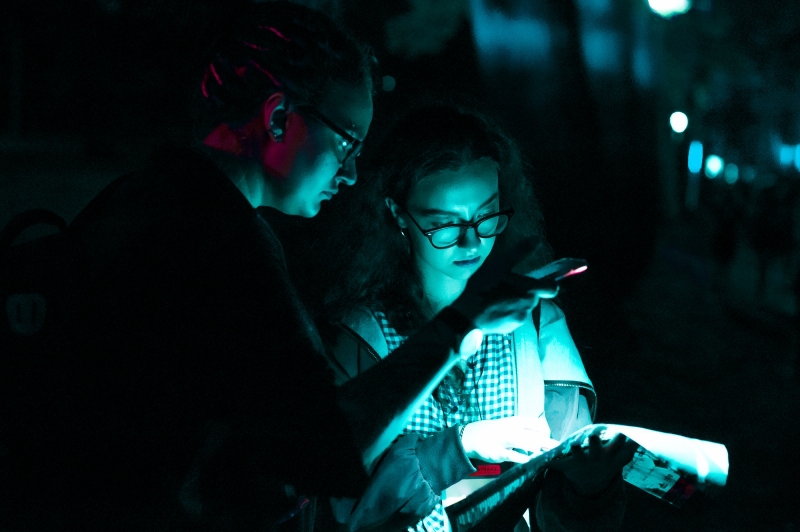 In 2018, 26 teams entered the final round of the competition and received an opportunity to bring their ideas to life. The winners will be selected by the jury.

“The festival is becoming more and more popular: we received three times more applications than last year, from artists from 27 cities all over the world,” comments Olga Arshanskaia, the festival’s organizer. "This year’s topic is “Paradox”.

The St. Petersburg version of the Lantern Park project displayed at the Lux Helsinki festival will be presented in Gatchina. To make this idea come true, St. Petersburg and Gatchina residents attended a series of workshops and made 100 designer lanterns.

Apart from that, the viewers will get an opportunity to familiarize themselves with the Other Voices project, created by Stas Svistunovich, the Breakthrough (Прорыв) and the Golden Mask prize winner, in collaboration with the Institut Français, the New Media Laboratory, the Show Consulting school of stage arts, and ITMO’s Department of Creative Lighting Design. Among other participants will be Alena Kogan, Vadim Gololobov and Sergei Karlov, who will transform the Admiralty building. Nick Khamov together with the AXE Engineering Theater will present the installations for the Faust 3.2. LABOR play which will be demonstrated in Gatchina in September, while Alla Maslovskaia and Marina Sosnina will organize a multimedia music and light show “The Mermaid”. The festival will end with a concert by the INGERVALA folk project. Two teams from ITMO’s Higher School of Lighting Design will also present their projects.

“The Rain” installation: can you make the rain go upside down?

The Round Pond in the Gatchina Park will showcase an installation by Master’s students of ITMO’s Higher School of Lighting Design Olga Poskrebysheva, Natalia Frolova, Kirill Varavin and Albert Mukhin. The installation will feature the rain which violates the laws of physics. Usually, when it rains, raindrops fall downwards. But what if they fell upwards?

At first, when approaching the pond, you will see nothing. But the instant you make some noise you will notice that the raindrops are detaching from the water surface and “falling upwards”, hitting an artificial water surface over the pond.

“The louder the sound the user will make, the more raindrops will fall upwards. The detectors react to the noise and adapt the raindrop movements accordingly,” explains Kirill Varavin. “The installation elements are suspended over the pond; they display the movement of raindrops and the circles they create on the water. The users can enhance their experience by exploring the pond and interacting with the installation.”

The main idea of the installation is to attract people’s attention to the negative consequences of human impact on the environment.

“One of our main goals was to nudge people towards reassessing their environmental footprint. Although this subject is more and more talked about, it doesn’t lose its topicality. We didn’t want to paint an excessively negative, doom-and-gloom picture; instead, we focused on how people can change not only themselves, but their environment at large by wiping out entire ecosystems. To make a stronger resonation and give homage to the festival’s theme, “Paradox”, we decided to do this all through inversion, as inversion is the strongest form of change,” explains Olga Poskrebysheva.

The team started working on the project in March, just before the first stage of the contest. They had to go through a lot of ideas before finding the final concept. The project’s originality stems from the multiskilled nature of the team: Olga comes from an architectural background, Natalia majored in architectural spaces design, and Kirill graduated from ITMO’s Faculty of Physics and Engineering.

“We all had our unique visions, which oftentimes resulted in some crazy ideas. We even thought of making an aquarium full of gigantic fluorescent fish. Now that I think of it, it’s this idea that inspired our final project,” shares Natalia Frolova, a Master’s student at ITMO Department of Creative Lighting Design.

The preparations for the project involved taking measurements, creating a prototype model and carrying out the necessary tests and check-ups. You can see the final result exhibited in Gatchina park on August 10-11.

In 1781, Immanuel Kant published “Critique of Pure Reason”, his seminal work on noumena, objects or events that are completely non-cognizable through mere human sensations. Inspired by Kant’s fundamental philosophical concepts, along with Richard Thaler’s Nobel-Prize-honored works in behavior economics and avant-garde ideas of the Russian Oberiu writers, the authors of the “Critique of Pure Reason” installation invite the audience to explore words’ hidden emotional meanings and ponder the many paradoxes connected to language.

“Words are the building blocks to our everyday reality. Constantly fluctuating between the material and immaterial worlds by being said out loud, heard, processed, and interpreted, they create the nuanced complexity inherently present in every human communication. This is mind-blowing,” say the project authors.

The installation in question consists of three megaphones, each emitting multicolored LED ribbons. Circumventing the trees, the ribbons lead to the head-shaped frame-and-cloth sculpture which is highlighted by three light sources emanating the same light as the pairing ribbon. Functioning as a system, this convoluted structure allows the participants to see the literal effect of their words.

“Our installation is a game for three players. Each one has to shout into their megaphones for one minute; the stronger the sound, the brighter is the color of the associated LED ribbon and the faster its light reaches the head-shaped sculpture. A minute later, the latter lights up in the color of the loudest shouter with steam coming out of its ears,” comments the project team member Natalia Boikova.

The head is fitted with a smoke generator which goes off in the end of a one-minute contest. It also partly houses a control system and an accumulator-based power supply, which, together with vibration sensors, are also embedded in the megaphones. The latter pick up the signals and transmit them to receiving devices in the head-shaped sculpture. The smoke generator is set off through the remote control.

Apart from Natalia Boikova, the installation project team consists of five other ITMO Creative Lighting Department Master’s students: Irina Ampleeva, Daria Vakhrova, Polina Kuzmina, Nadezhda Krauze, and Alexandra Lezhnina. According to Natalia, the uniformity of the team composition was intentional: the participants decided not to invite third-party specialists in order to understand what they themselves are capable of.

“We wanted to challenge ourselves and felt the experience would be invaluable to our professional development. There’s not a lot of events out there which give you this amazing opportunity to create your own project and lead it to completion. We came up with the idea soon after we heard about the theme of the festival. But we wouldn’t be in the place we are now were it not for our university department. Our project incorporates the techniques and methods we learned over the course of our studies, as well as the advice our mentors and colleagues gave to us,” reflects Natalia Boikova.

More information about the festival can be found on its official website. We would only recommend our readers not to miss the festival’s main event, the multimedia pyrotechnic light show called “On the Horizon”. Directed by the critically acclaimed Alexandrinsky theater visionary Anton Okoneshnikov, this will be a sight to remember.