On August 16-17, 2019, the annual international festival of light art “Light Nights in Gatchina” took place at the Gatchina Palace and Estate Museum. Each year, the festival brings together students of Russian and international universities, artists, designers, multimedia professionals and creative collectives and design studios from Russia, Europe and beyond. 2019 has been the third year that the students of ITMO University’s Master’s program “Lighting Design” participate in the official selection of the international festival. This year, it was ITMO’s students Lyubov Angelova, Mikhail Andreev, and graduate Valeria Molodovskaya that took part in the event’s art residency. 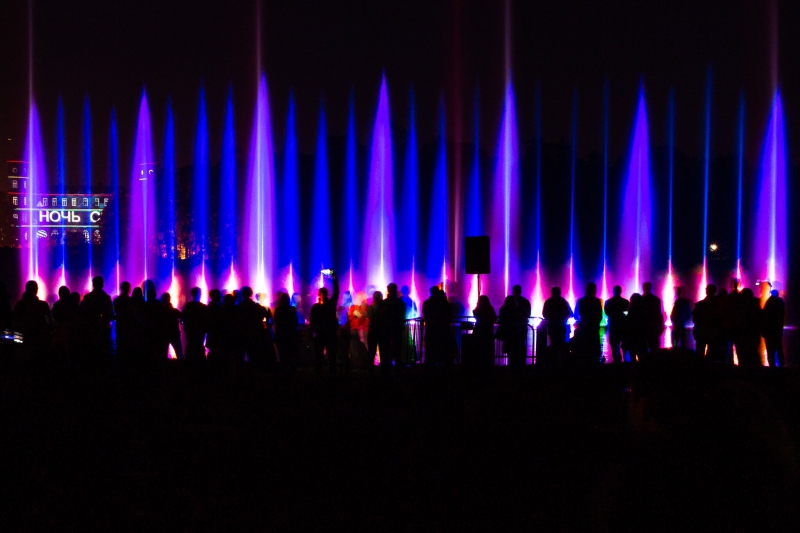 The main topic of this year’s festival was Water, serving as a source of inspiration for participants whose works reference it as the element of sundry states and properties. The program included original light art objects by Russian and international artists, videomapping on the Gatchina Palace’s Jordan façade, interactive installations, a multimedia show revolving around the estate’s fountains, fireworks launched from the basin of White Lake, as well as performances and stage productions.

A competition of light installations and videomapping took place as part of the festival, its participants ranging from students of Russian and international universities to artists, designers, multimedia professionals and creative collectives and design studios. The judges panel was made up of established experts in the field of lighting design, architects, artists, and directors of various international light art festivals.

The works proposed as part of this year’s official selection competition revolved around the topic of Reflections. Participants had to find images, associations, metaphors and narratives connected to the world behind the looking-glass, the flipside of reality. A total of 18 works made it into the competition’s final, consequently being showcased at the festival. The entrants of the Videomapping nomination presented their original audiovisual creations in the 2D and 3D formats, animation and other video-art techniques. The shortlisted oeuvres were demonstrated on the Jordan façade of the majestic Gatchina Palace.

“A total of 90 applications from Russia and other countries were submitted, but we intentionally didn’t focus on increasing the number of participants, instead putting the premium on the quality of their works,” comments Olga Arshanskaya, the festival’s director. “We have also focused on young participants; as a general rule, artists no older than 35 years old took part in the event. These could be people that didn’t have  extensive experience up their sleeve, but admittedly, there were several very experienced young artists participating. Another special feature of this year’s festival is that we significantly reinforced its performance element, with six theater ensembles taking part.”

Also showcased, this time as part of the non-selection program, were works by a number of Russian and European creative studios. For one, Latvian company ARTISTIC displayed their fountain music show Extravaganza, created especially for the Gatchina international light art festival. The author’s central idea was represented by five music episodes demonstrating an entire spectrum of emotions and impressions evoked by the synchronic dance of water, light, color, and music.

Dutch artist Ralf Westerhof, a seasoned participant of international light art festivals in Amsterdam, Lausanne, Singapore, Jerusalem and other cities, presented his installation “Ab Jove principium”, “From Jove (also known as Jupiter, the king of gods in Roman mythology – Ed. note) be the commencement”. Much as the quote from Virgil’s Eclogues that inspired it, the work instructs spectators to start with the most important, urging them to think what they value the most, what they want from life and what they have already done to achieve it. The project is implemented with support from the Consulate General of the Kingdom of the Netherlands in Russia.

No less philosophical is “Limb. Halo”, the work by the technologist and artist Nick Khamov, who addresses the phenomenon of the limit to our ability to cognize the world. Limb, Latin for “edge, limit”, is the term originating from medieval Catholic theological tradition. Nick Khamov dedicated his oeuvre to Stephen Hawking, the person who peered beyond the limits.

Master’s student at the Lighting Design program Lyubov Angelova showcased her light installation “Orthomolecule”. A designer of architectural environments by her first background, she was joined by two of her fellow students, Dmitry Ingi and Alyona Khvatova. The concept hinges upon the understanding of water as instrumental to the living world, that which ensures that the latter works as one single organism; water carries information and thus can reflect people’s lives in its structure.

Orthomolecule represents a dynamic interactive structure six meters in length and consisting of six two-meter mirror triangular prisms. Atop each prism is an architectural projector that spills light on the mirror planes of the opposite prism.

Effecting a coordinated rotation of all six prisms, the spectators can create a hexagonal molecule of frozen water, a snowflake. This breaks the mold of the usual human-object interaction, engaging interactions between people that participate in the art performance. Each participant has a choice: either to maintain the overarching order or plunge it into chaos.

“When working on your project, developing the concept and making drafts, you don’t even think about how many small tasks you’ll need to solve to achieve your goal; you don’t know what it will be like working with certain materials, or how the equipment will function in a park. But I think that it all worked out just fine. We’ve managed to solve all tasks, including the unexpected ones, and even got some rather surprising results. This is how “live” materials work: you can’t plan everything in advance, there still remains room for change. The most important thing here is to bring your idea into life, feel its scale, see people’s reaction and just embrace your success. I plan to continue participating in such events in the future, as I see plenty of opportunities for growth,” shares Lyubov Angelova, a Master’s student at ITMO University’s Master’s program “Lighting Design”.

Another ITMO University participant, Mikhail Andreev, presented the installation “Merging In”. He authored the original concept together with his brother Alexander. Their idea was inspired by the ready availability of opportunities the modern era offers to anyone wishing to leave their mark on the  internet. Merging In expresses this through the intricate play of light and shadow the artists create with the simple tools of architectural lighting and flecks of light on water, which, reflected off the walls of the surrounding screens, subtly prompt spectators to take a selfie.

A more technologically complex installation, Stardust, was developed by Valeria Molodovskaya, a graduate of the Lighting Design Master’s program, who worked in collaboration with her colleagues, lighting designer Valeria Lukinskaya, the program’s graduates Yan Koval and Ekaterina Svyatlovich, and invited specialists in the fields of engineering and applied technologies Artyom Smirnov and Ivan Andriyanov.

Valeria is a season participant of Light Nights in Gatchina: it was there that in 2017, whilst still at the university, Valeria displayed the installation “Moon Water”, which she worked on together with Kirill Shampritsky, Dmitry Chukhin and Nikita Paschenko.

As explained by the author, Stardust is a symbol of the magical world, an illusion of a fairy-tale tree cocooned in ethereal pollen. This image can become both a strong accent and  some kind of gateway to a mysterious world, and an artist’s main task here is to create the feeling that this is a natural phenomenon that always existed in this environment, believes Valeria.

The full immersion effect was achieved via special audio and video content, which was projected on the grass, trees and all surrounding objects with the projector Panasonic PT-DZ21K2E and the lighting device LEDWASH-CITY-COLOR.

“This was the first time that I combined several very powerful tools in the framework of one installation. These are mapping, a comprehensive lighting environment, and the inclusion of augmented reality in synthesis with the integrated art objects, all of which was of course supported by audio content. This installation is the result of work by an entire team of professionals. What we managed to achieve is a union so harmonious that even despite all the pitfalls, which are always there whatever the event, we succeeded for a 100%. Satisfied visitors, nice comments and words of gratitude all attested to that. This is really important for us: after all, when you create something in the context of a festival, it is always for people. And positive feedback is really the best reward one could have,” says Valeria Molodovskaya.