Year after year, our students converge at ITMO.Megabattle to compete in creativity, athleticism, intelligence, and scientific prowess – all to prove that their school deserves to be called the best. ITMO.NEWS has decided to look into the event’s history. 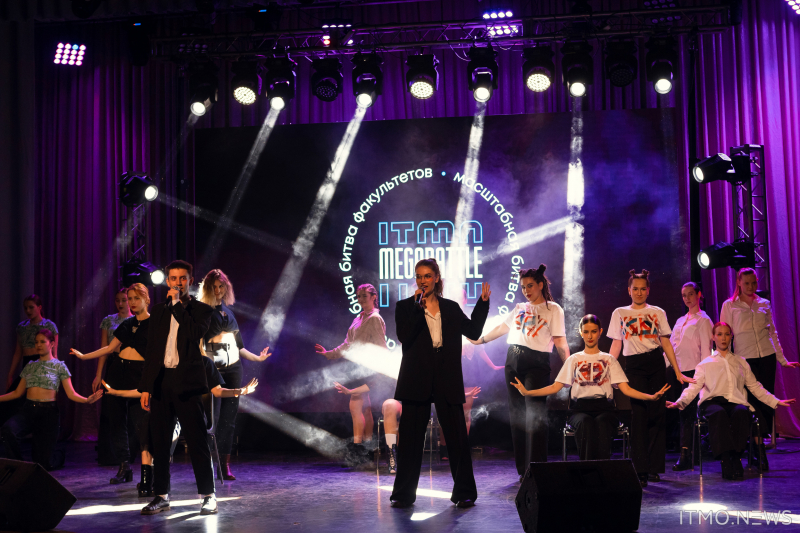 Four years ago, ITMO already had a slate of various events for students. For instance, the two competitions titled I’m a First-Year and Spring at ITMO – in both cases, the students would spend an entire semester competing, collecting points, and preparing for the final show. But as Arina Petukhova, one of ITMO.Megabattle’s first organizers, says, all three projects have very different goals despite their similarities.

“I’m a First-Year and Spring at ITMO were separate events focused on competing; with ITMO.Megabattle, we wanted to preserve that sporting spirit, but put “family values” at its core. We created Megabattle in order to help create our ITMO.Family, to bring students together and help them establish communications with those from the other schools. Today, ITMO.Megabattle is most students’ point of entry into active university life,” she explains.

Besides, after a while Arina Petukhova and her fellow organizer Daria Rumyantseva had noticed students starting to lose interest in events held at the university. So, in September 2018, they developed the concept of the new event and launched the first-ever ITMO.Megabattle with the help of their curators – Andrey Zlenko, the head of the Student Initiatives Support Department, and Ekaterina Kalkina, the department’s deputy head.

“We wanted the project to become a point around which a community would grow; where you might meet people with similar interests from your school and others. And you don’t even need to possess some special talent. Participating in ITMO.Megabattle is cool because you get to be a part of a great community,” says Daria Rumyantseva.

She adds that ITMO.Megabattle can be compared – both in spirit and in content – to the House Cup from the Harry Potter universe, which, too, is competed over by wizards from the magical school’s four Houses. ITMO students, too, collect points for their schools throughout the year by taking part in various competitions; at the end, the school that has collected the most points receives the event’s Grand Prix.

The competition integrates the best practices developed by the organizing team during I’m a First-Year and Spring at ITMO. The project is split into two rounds: fall (September to November) and spring (February to May). Initially, each round only involved two events: trips to the Yagodnoe outdoor camp and a concert in the fall, and a quiz and a final team contest in the spring. As Arina Petukhova says, most of the contests held as part of the two prior events were focused on competition, not on the spirit of camaraderie. This deviated from the goals of ITMO.Megabattle, and so the organizers decided to reduce the number of contests down to two. At the same time, the diverse nature of these contests helped dispel the stereotype that they are only open to creative students who can sing and dance well.

The first round predominantly involved first-year students: first, they traveled to Yagodnoe to meet their slightly older peers and tune into their school’s vibe; then, they took part in a concert. Second-year and above students merely helped them to prepare by, for example, writing scripts or making props. In the second round, the competition became open to all students regardless of their year. During the general rehearsals, students from all schools gathered to watch the performances and support each other. At the finals, they all sang the event’s own hymn.

Over time, the format and the content of ITMO.Megabattle became different. In 2020, the event went online because of the COVID-19 pandemic and introduced new competitive tracks, including those based on Minecraft, GeoGuessr, and Minesweeper; during the finals, the gala concert was replaced with a short film competition.

An event for everyone

This year, ITMO.Megabattle’s organizers went back to the usual offline format, redesigned a number of contests, and united them under one premise: a casino heist. An immersive quiz allowed the participants to become witnesses of a casino robbery in 1930s Las Vegas. Then, the organizers made a real-life version of Monopoly in which the teams had to build up and improve their casinos. In another quest, the students had to visit five university buildings to find QR codes and solve the robbery. During an in-game Minecraft event, the teams built different objects and fought against one another.

“There are events that are for all; we try to make an event for everyone. We look for things that are interesting to certain groups of people while fitting into the event’s overall family-focused concept. That’s why we always come up with new activities, such as this year’s MegaQuest. In the fall, we’ll add a few more new activities that should attract people who aren’t familiar with Megabattle or student events in general. In the future, we also hope to hold a gala concert at a third-party venue,” says Denis Oversnov, the head organizer of ITMO.Megabattle 2021-2022.

In May, ITMO.Megabattle culminated with a final gala, in which teams from the university’s schools were randomly assigned two themes each that they needed to base their performance on. The first theme was various natural phenomena, such as meteor showers, mirages, northern lights, thunderstorms, or eclipses, while the second theme was “professional fields,” such as human-human, human-machine, human-sign system, human-nature, and human-creative image.

The team of the Faculty of Technological Management and Innovations told the story of saving developers from the metaverse, while students from the School of Translational Information Technologies journeyed into their own game to stop an AI rebellion. We can all sleep peacefully thanks to the School of Computer Technologies and Control: in their performance, the students succeeded in securing an agreement that an alien civilization will not destroy the planet for a space highway. A Mexican chef and the team of the School of Life Sciences showed the audience once again that believing in yourself can help overcome any obstacles. Finally, the School of Physics and Engineering came in with a full-scale family drama to highlight the importance of spending time with your dearest and nearest.

Each performance was evaluated by an esteemed jury comprised of actors in different genres: actress Nadezhda Fedotova from the Lensoviet Academic Theatre; Anton Borisov, one of the founders of Russia’s stand-up scene; Maksim Mishkevich, a film and theater actor; Maksim Nikonov, a drummer with the band Shary; and Evgeniy Volkov, a YouTuber. These experts followed the plotline of each story to see that it complied with the outlined theme, as well as evaluated the vocals, choreography, acting, and visuals (videos, costumes, and stage props).

“At one of the previous Megabattles we presented a horror story, then we also did a thriller, and this year we ventured into a family drama. That’s all because people at our school want to destroy all stereotypes. Our performance was created by an enthusiastic team of people from different faculties. We wanted to create something high-brow and deep, something that would inspire our audience to think and yet strike really close to home. My friend Igor Gomzhin and I came up with interesting theatrical transitions that our actors brought to the stage and even beyond – for instance, at the end of the performance our dancers were in the audience, tapping out a rhythm with their feet, while the play unfolded onstage,” shares Stepan Kuznetsov, one of the directors of the performance and a second-year student at the Faculty of Nanoelectronics.

However, the absolute winner of this year’s ITMO.Megabattle by the total points acquired in all contests was the team of the School of Translational Information Technologies, who took the competition’s Grand Prix.

“At the school, we study quite a lot, but through this heavy workload we still did our best to get as many points as we could in Megabattle contests – and we always took first place. No matter if it was a quiz, a Minecraft battle, or ITMO.Punchline, we always fought for the win whenever we could,” says best actress Antonina Chernova, a first-year student at the Information Technologies and Programming Faculty.