A group of St. Petersburg media artists and scientists have found a way to make creation of art more accessible to blind and vision-impaired people. As part of their project, artists translate emotions into abstract graphic artwork and use them to create a sculpture garden on the premises of the Konstantine Grot boarding school for the visually impaired. Mikhail Klimovskiy, advisor to ITMO University Rector, and Yuri Didevich, a filmmaker, media artist and independent researcher, acted as the project’s curators. Read more about their project, future plans, and inclusivity in art in this article by ITMO.NEWS. 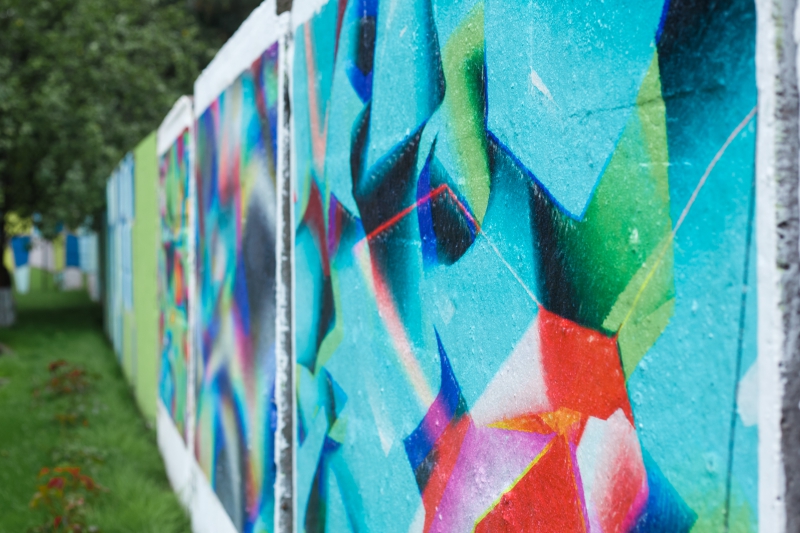 Administration of the Konstantine Grot boarding school for the visually impaired asked the team that consists of Mikhail Klimovskiy, Yuri Didevich and media artists Ekaterina Butorina and Marina Blinova to come up with a project that would not just help decorate the school’s premises but also involve its students in the process.

The school’s concrete fence was previously painted by graduates of the Saint Petersburg Stieglitz State Academy of Art and Design. The new project had to be aimed at not just the onlookers but become a creation of the people affiliated with the school.

The authors offered to create abstract paintings based on vision-impaired people’s emotions. For the pilot version, they proposed that the school’s librarian Olga Agafonova would read abstracts from three books to the students. Then, their emotional condition according to James Russel’s circumplex model was identified using their encephalography data, and stratified into various color correlations where every emotion corresponds to a particular color.

According to Mikhail Klimovskiy, it was essential to translate the encephalography results as properly as possible by excluding the human factor.

The emotions associated with Olga Agafonova’s declamation of the Holy Scripture, Esenin’s poems and Pushkin’s “Tale of Tsar Saltan” were translated into abstract images that can already be seen on the school’s fence.

Still, this is only the first stage; the next step will involve the creation of a sculpture garden.

“The most important thing here is the feedback that we can get from our work. And in order to make it so that the school’s staff and students would not just create, but also perceive these works of art, we introduce the second part of the project, which will be a sound sculpture garden. Based on the data we received, we’ll create an installation that will also generate various sounds. This way, we’ll make it accessible and meaningful to everyone,” comments Mikhail Klimovskiy.

The future of Emograph Project

The authors plan to go beyond paintings and 3D sculptures. They plan to soon present a device that will help people receive emotional feedback in real-time mode.

“It will be a surface, something like a table, augmented with speakers and sensors. By touching this device, users will be able to produce various patterns and translate them into graphic images and sounds. The invention’s unique feature is that it will be able to adjust to the user in real-time mode, and produce colors and sounds that will harmonize their emotional background,” explains Mikhail Klimovskiy.

The boarding school’s administration and the creative team, Mikhail adds, plan to continue their collaboration by creating a sort of an R&D class where they will conduct future research in this field and experiment with art therapy.

Mikhail Klimovskiy believes that all future inventions will be made at the interface of different fields of science.

“It’s obvious that the format of synthesis offers many prospects for the development of science and art. This is similar to what we can observe in modern science: making use of a combination of various disciplines. The same approach will eventually make its way into the fields of music and visual arts, and we’ll learn to perceive them differently in their complexity,” says Mikhail Klimovskiy.

Because all art today – from music to artwork – is digitized, the synthesis of these fields is no longer too difficult to imagine.

What’s more, Mikhail Klimovskiy suggest placing greater focus on abstract art, as it is something that offers people an opportunity to fulfill their creative potential and strengthen neural connections. He believes that modern highly realistic animation doesn’t help to raise people with sound logic and critical thinking, but rather relaxes the brain and impedes its progress.

In future, the Emograph project can prove useful to people with disabilities or those suffering from stress-related disorders. It also has possible applications in the planning of playgrounds, as this technology makes it possible to design them with due regard to children’s needs and preferences. Children's abstract thinking will help with interior design, as well as decorate it with unique images and colors.