The most active volunteers and partners of the #WeAreTogether initiative (link in Russian) received medals and certificates for helping the elderly and people with reduced mobility during the pandemic. In this ITMO.NEWS article, the participants from ITMO University shared how they decided to start helping others and what they expect to happen next with the project. 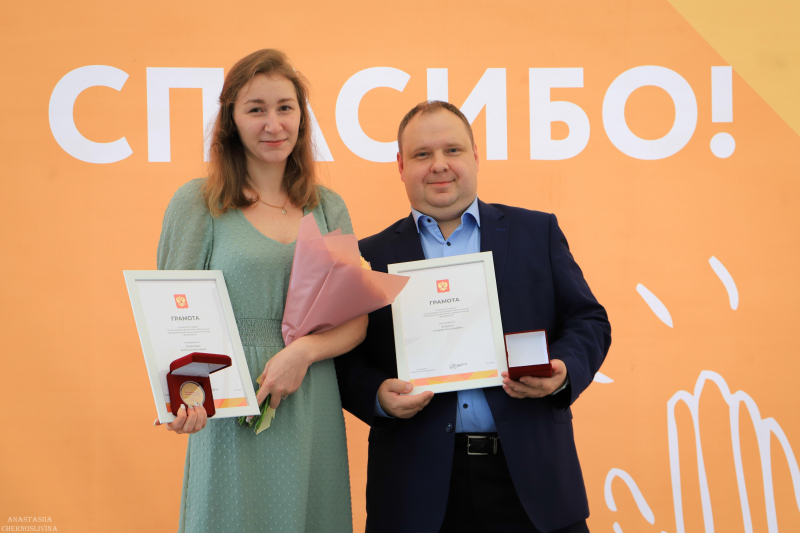 Alyona Tarasova and Andrey Zlenko at the ceremony. Photo courtesy of subject

The #WeAreTogether movement spread throughout Russia: more than 100,000 volunteers, almost 10,000 representatives of different funds, NGOs, and businesses joined the project to help more than 3 million people.

By late August, the Federal Agency for Youth Affairs published a list of more than 17,000 names of volunteers, headquarters, and companies that helped the project to a greater extent.

Not including medical schools, ITMO University was among the first to join the initiative and open its operational headquarters. ITMO volunteers performed different tasks: loaded and packed food in the warehouses of the Rus Foundation before shipping them to citizens, personally delivered orders by scooters, introduced “autovolunteering”, and became activists in this area.

Now, the country has reduced restrictions on self-isolation, but many elderly, low-mobility citizens, and large families still need help. Some cannot go outside and others have no money to buy basic necessities such as food or medicine. Actively helping people, the #WeAreTogether initiative (even though it’s not fully functional now) also managed to create an infrastructure of organized assistance to those in need.

“We are waiting for official information on how the work will be organized after September 20. On the whole, thanks to #WeAreTogether, St. Petersburg now has volunteer teams in each district. These are close-knit teams that can regularly help elderly people and large families,' says Alyona Tarasova, a manager of the Strategic Initiatives Support Department. “In the future, we plan not only to walk pets for elderly people but also set up digital technology for social groups in need.”

The pandemic has proved that not all people in need receive help from the government – sometimes simply because they do not know how to request it, sometimes because social workers do not have enough time to help everyone.

“During the period of self-isolation, people got used to “their” volunteers, to those people who work in their area. Volunteers are more mobile than social workers, and there are more of them – again, it is easier to invite them. The Rus Foundation wants to create a system of warehouses distributed across the districts. I think this will greatly simplify the logistics of the volunteers' work. We are ready to continue participating in the project and help in those districts where our students are based (Central and Petrogradsky, perhaps the Moskovsky district). By the way, there is already a student who is willing to supervise the ITMO volunteer headquarter,” says Andrey Zlenko, the head of the Strategic Initiatives Support Department.

ITMO.NEWS also talked to several students who actively helped the elderly and people with reduced mobility during the pandemic.

Before the pandemic, I tried to help regularly. With the self-isolation regime, all events were canceled, even visits to shelters stopped, but people who need help have not gone anywhere. That’s why when I heard about #WeAreTogether, I decided to join. I was not afraid to get sick, but my parents were worried about me, even scolded, because I am constantly in contact with risk groups.

I experienced different emotions – from euphoria when I helped people to pity when I saw how these people had to live. Many people need real help. Participation in the project made me think about how alone old people are. One woman asked me to come to her and just talk, but we are not allowed to do that. After this, I called my grandma and we chatted for several hours – to relieve this emotional tension.

I knew that my mates were already helping with delivering groceries and I wanted to join. At first, I was worried that I would put myself at risk by being outside, but then I calmed down. During the initiative, I was engaged in the packaging of food sets and their delivery. I remember the trips and fun times we had with the guys. I liked to help, feel like a part of a team, and be around people who are heavily engaged in their work. And, of course, it was nice to hear words of gratitude and see a sincere smile from those we helped.

We often communicate with the elderly within the #InNet club. It's cool to see people's eyes when you help them and understand that you are needed. There are a lot of people who need help. On some days the number of requests did not decrease. The first time I was happy when I saw that a request disappeared. I thought that these people got help. Then I found out that if it stays for a long time, then it simply gets rejected, and disappears from the list. It was difficult to accept.

I tried to take more requests. My family was very supportive, they even came here from their hometown. At first, we just sat at home, and then we decided to deliver food together. After the project, I will continue to work with older people. There is a request, a desire, and like-minded people. It’s really great.

Faculty of Laser Photonics and Optoelectronics

From the first days of quarantine, I wanted to become a volunteer, but my mother stopped me. I decided to join anyway, at least to see how everything is organized. As a result, a day later I started helping people. I shared my positive emotions with my mother, told her about the precautions taken, and she accepted my choice. During the project, I saw a lot of things to think about. For example, a married couple of veterans whom we congratulated on May 9. The man told me about how they met. He looked at his wife with such loving eyes that it was hard to believe – these people have been together for over 60 years! It's cute.

Faculty of Technological Management and Innovations

I heard about this opportunity [to take part in the initiative] from our Volunteer Center. At first, we went to the warehouse to collect food packages there, and then deliver them to the districts. Later on, I received a volunteer kit (protective equipment, accreditation), but for personal reasons, I could not start work. Then Andrey Zlenko proposed an alternative option: to coordinate driving volunteers. It helped to establish logistics and the efficiency of our work: from three to five orders could be completed in just an hour. I am glad that I was able to help in some way. Besides, I am very proud of the guys and our mentors who gathered us all.

I decided to volunteer because I couldn't just sit around 24/7. It gave me the chance to both spend time actively and provide real help. Of course, I faced a great deal of stigmatization from others, people judged me for not staying at home and walking around the streets “infecting” others. But I believed: everything I am doing is right and important. I followed all the precautions but was still afraid of infecting those I was helping. They trusted me – it was a huge responsibility. I also really enjoyed being around open, kind, and helpful people. It was nice to realize that there are so many of them.

At the beginning of the summer, we already talked about the #WeAreTogether initiative, and also shared the stories of our students who became volunteers.