Here are a few words about my experience participating in ITMO's English Speaking Club! 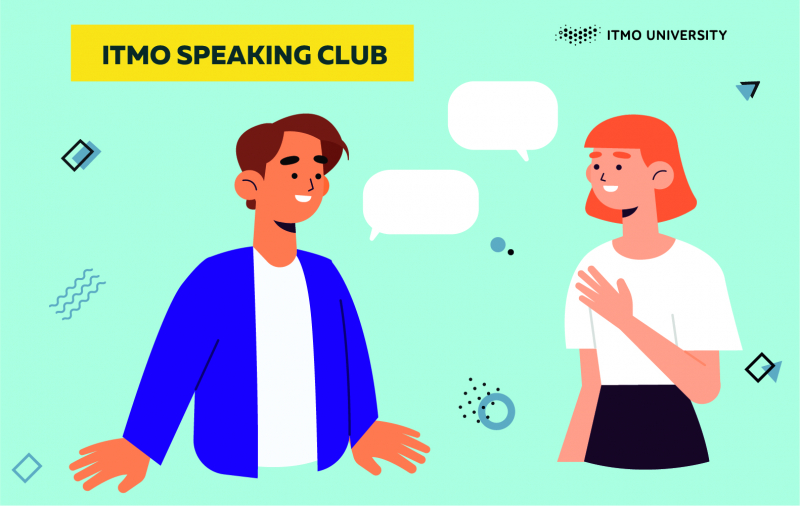 I found out about the speaking club by accident when I was looking for events of that kind on the Internet.I remember that the first speaking club event that I attended was about ecology. We were divided into small teams, so that everyone would have the opportunity to speak. This is a feature of all of their events, so conversational practice is really a big part of it. The organizers prepare presentations for discussion. Therefore, the participants do not just talk about a general topic, but perform a specific task. Each task has a specific time for discussion within the team. As soon as the time runs out, the team representative announces the result of the discussion. This is how teams exchange their thoughts and ideas.

I would also like to note that people with different levels of language proficiency come to the club. And the organizers try to divide the participants into teams according to their language level, so that everyone would be comfortable.

When you practice spoken language, it is very important to not have the opportunity to switch to your native language. That is, even if you do not know something, you need to find a way to convey the thought to other people. At the events of the speaking club, Russian speech is practically absent. All discussions and conversations are conducted in English.

It is very important that there is no time to prepare or use a dictionary. Speech is spontaneous, sometimes you make mistakes, but this is the point — that’s how you overcome the conversational barrier.

Club members come from completely different faculties, courses and specialties. Everyone always gets to know each other, and it is really interesting to communicate with students of different specialties. Before the first event, I was worried that everyone would come with groups of friends, and it would be hard for me to find those with whom I could communicate. Besides, I'm not an ITMO student, so I don't know anyone at all. But only with rare exceptions I noticed people who were well acquainted with each other. Everyone was very open, friendly and, most importantly, willing to communicate in English.

Also, international students take part in the events. It's always so exciting to listen to their stories, where they come from, and what they study. Some come for a few minutes during their break between studies — that shows how interesting the speaking club is for them.

So, as I said, each event is thematic. There are some special events that the speaking club holds. First, it is important to mention Halloween.

We decorate the room with things that remind us of Halloween. Also, everyone dresses up in costumes for Halloween. The atmosphere is really amazing, and this event attracts many participants.

Another fun event is Movie Night which is carried out quite often. I was lucky enough to visit one of them, when, like in a cinema, we watched a film from the Marvel series in English. I have never watched Marvel in the original language, although I really love this series of films.

Another type of event that was held in 2019 for the first time was ITMO Talks which is like Ted Talks. It was a large-scale event. The organizers did a great job! Within a few weeks, they posted an invitation to the selection for this event, where it was necessary to indicate the topic about which the participant would like to present. The participants were selected and rehearsed their speech. On the appointed day, everyone gathered in the premises of the speaking club. The organizers invited judges, spectators and the participants themselves. I was at that event as a spectator. If you've ever watched TedTalks, then you know that each performance is completely unique, it fascinates and makes you think about a problem or motivates you to take some action. I've never been to a real Ted Talks show, but I watched a lot of shows on YouTube. In the speaking club, I felt the same energy from the performances of the guys, as when watching the real Ted Talks. During the event, the judges evaluated the performances of the guys and identified the best of them.

The pandemic undoubtedly disrupted the usual course of life, and the opportunity to attend the speaking club in person was gone. But the organizers were not taken aback and began to organize online meetings in Zoom, including themed events and Movie Night.

Recently the speaking club has expanded. Now it has not only English, but also French. The French speaking club also has thematic conversation events and a Movie Night.

I definitely recommend participating in the English speaking club activities. You can visit their VK page and find out about upcoming events.

Bachelor of Informational Systems and Technologies at LETI