Karina Pats, a PhD student at ITMO’s Faculty of Information Technologies and Programming, studies the functioning of nuclear receptors using molecular dynamics and docking. She works actively together with the laboratory of Ferdinand Molnár at Nazarbayev University in Kazakhstan where she did her internship last spring. Thanks to the Erasmus+ program, now she got to work on a bioinformatics algorithm project at the University of Lorraine, Nancy (France). ITMO.NEWS talked to Karina Pats to learn more about life in France, new projects and colleagues, as well as landing an internship during the pandemic. 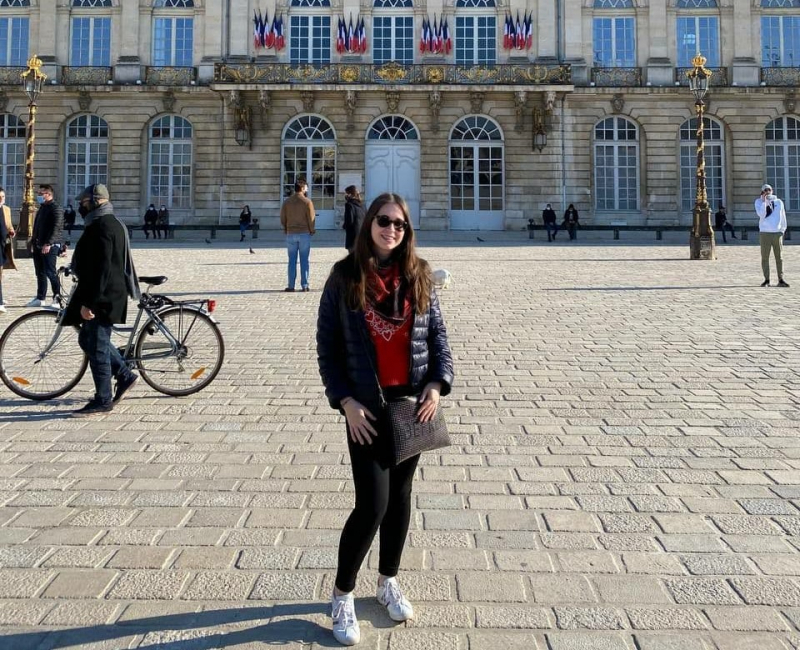 Karina Pats on her internship. Photo courtesy of the subject

Karina, why did you choose the University of Lorraine? Is it particularly strong in your field?

ITMO students have the opportunity to take part in international exchange programs and study at the University of Lorraine as part of the Erasmus+ project. Opportunities to apply for this program started at the beginning of this academic year: students could apply for specific internships or propose their own projects – and I decided on the latter. Then, I had a series of interviews with supervisors and the selection committee and eventually won this grant.

When I first signed up for an information meeting on applying for a grant, I was a bit skeptical. I didn’t know that bioinformatics was taught at the University of Lorraine as it’s not exactly such a popular field. Yet I was surprised when I learned about the LORIA laboratory at the university and its research team engaged in bioinformatics.

Technically, the laboratory belongs to the University of Lorraine but is also supported by two government organizations: the French National Center for Scientific Research (CNRS) and the National Institute for Research in Computer Science and Automation (INRIA). So, here you’ll find only highly-qualified specialists with great expertise.

So this internship was mainly for networking?

I’m counting on it. My supervisors are two nice women, and I feel extremely comfortable when talking to them. One of them is actually the head of the Capsid Loria group where I’m also working. This group brought together fascinating people, and I’m pleased that they are interested in my project and are eager to help me. And I’d like to keep permanent relationships and collaborations with them. Honesty, I’m lucky to be here as it’s a great chance to learn a lot.

What project are you working on now? And what would you like to achieve during your internship?

I want to create an algorithm that will predict the behavior of nuclear receptors without using molecular simulations because they are usually time- and resource-intensive. I’m developing methods for the automatization of this process. Perhaps it can later grow into something for all people.

In fact, this project emerged out of the need for such tools at Nazarbayev University’s laboratory. Some tasks require the use of computer modeling and simulations, and as a result, we have a large number of combinations to be reviewed and evaluated manually. This is an extremely difficult and tedious process.

It’s still in its initial stages. With other projects going at ITMO, I couldn’t focus enough on this project. Now, I’m happy to finally fully dive into it.

This internship is just one stage in my project. It lasts only four months, and I’ll be back in June. That’s not a lot so I want to develop a working prototype of the algorithm by the end of my internship.

What have you covered so far?

Not much, I’ve only been here a month. So far, I’ve only just come to recognize the wide scope of tasks that need to be done to achieve the final result. Before this internship, I had an idea of some of the challenges but not the true number of pitfalls that would appear along the way – for instance, there’s not much data available to train the algorithm.

I mean, it’s an interesting idea but I have a feeling that I’ll have to tackle numerous challenges and cover many discussion points.

Is there anything in the French lab that might help you?

All the lab's team are in one way or another engaged in the development of algorithms. Some of their programs work with incomplete 3D protein structures, restore and supplement them, while others, for example, can calculate the volume of an active site within a protein that binds to therapeutic molecules. But I still haven't been able to become familiar with all their projects.

What does your internship include? Can you visit the laboratory, the university building, or is everything closed now?

Now everything is done online. I work from home on my laptop and use the resources of local servers. All seminars are also held online. But once a week we have face-to-face meetings to report on the progress. And these meetings give us a chance to have live communication, and I think it’s very important. Although, as far as I know, those who are running experiments can visit laboratories, but we don’t have such a need.

How is the situation in the city? Do you manage to fully enjoy your trip?

Well, France introduced a curfew from 6 pm to 6 am. All large shopping malls are closed, and cafes and restaurants are open for take-out only – so, practically there’s nowhere to go. Also, Nancy is a small town, especially compared to St. Petersburg.

Of course, things could’ve been different but I have no time to be bored at all, I’m very busy working on my project and acquiring new skills and knowledge. Plus, visitors in France have to undergo numerous bureaucratic procedures. I haven’t even managed to do it all this month, so there is still a lot to do.

So far, the situation is very precarious. In my region, there is no complete lockdown yet, and it seems that it won’t happen but there might be new measures introduced. But I hope that by the summer everything will be better, and I’ll have the chance to explore the city and country.

Did you have any travel problems?

Actually, until the very last moment, I wasn’t sure if I could leave for France. Everything was constantly changing, and it was quite stressful. I learned the final decision on my trip almost a week before my planned departure.

Tourists still can’t go to France but I had a student visa. At the border, you have to hand in a bunch of different documents and tests. But they only checked my student visa and let me in.