The Material Science Communication School, which took place at ITMO in early September, brought together 35 students and young scientists, as well as top-notch experts in materials science and science communication from Rusnano, ITMO, and the National University of Science and Technology MISiS. Within three days, participants listened to experts’ views on the future of science and its popularization, as well as developed communication strategies for their projects. Here are the highlights from the school. 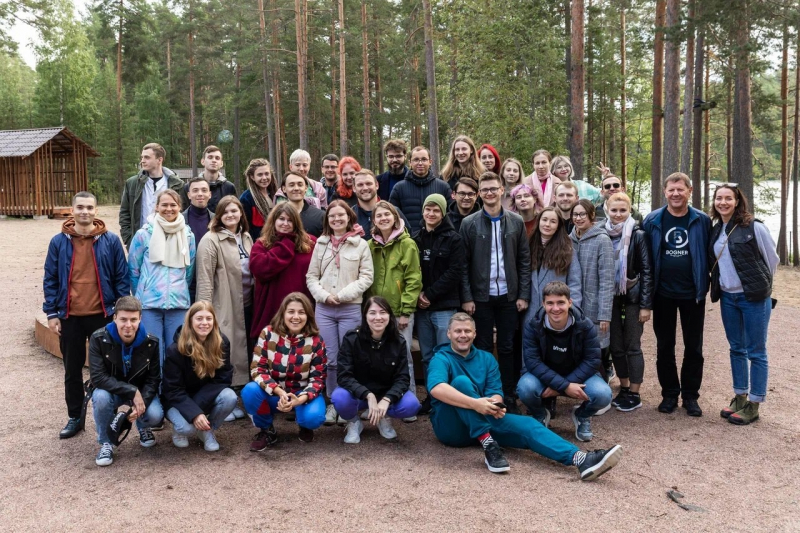 School participants and speakers. Photo courtesy of the school’s organizers

Being one of the Russian leaders in materials science and science communication, along with MISiS, ITMO became the second-best university in these fields, according to the Expert analytics center. Starting from 2016, the university has been implementing the first science communication Master’s program in Russia where students learn how to make science easy-to-understand and engaging, as well as to cooperate with scientists, people, and the government.

The school focused on finding new development and promotion strategies for scientific projects. It received 165 applications from 23 Russian universities, with only 35 young specialists from St. Petersburg, Moscow, and Krasnodar making it to the final round. The school was inspired by a fruitful cooperation between ITMO’s Center for Science Communication and MISiS’s Center for Strategic Initiatives and student research community. The key partner of the event was Rusnano.

“The value of science communication lies in the synergy of ideas, competencies, and experience, even though the path from an idea to its execution is long and thorny. Rusnano aims to help researchers walk this path, offering them a wide range of financial, networking, and technological opportunities, as well as scientific methods. Hence, the growth of scientific communities that cooperate with Rusnano is one of the critical drivers in the success of investments in innovative tech companies,” explains Daria Zaluzhnaya, Rusnano’s director for development.

The school kicked off with a presentation of the university. In her welcome speech, First Vice Rector Daria Kozlova stressed that the interdisciplinary school organized by two leading universities is an excellent example of cooperation.

Apart from lectures, the school’s event program also included trips to Yagondoe where the participants could continue their discussions in the fresh air. The speakers were Vladimir Vasilyev, the Rector of ITMO University, Andrey Voronin, the head of MISiS’s Center for Strategic Initiatives, Makar German, CEO of Rusnano, Nikita Marchenkov, the chair of the Coordinating Council for Youth Affairs in the Scientific and Educational Spheres of the Presidential Council of the Russian Federation for Science and Education, and Alexey Slobozhanyuk, a senior researcher at ITMO’s Faculty of Physics and a coordinator of the Scientific Breakthrough strategic project. They discussed the challenges encountered by today’s educational and research institutions, the most promising fields for the next ten years, and the key aspects to consider for young specialists building their careers.

The school’s program included presentations by top experts from ITMO, MISiS, and Rusnano. Alexey Slobozhanyuk explained what a principal investigator (PI) is and how a young specialist can get into science. Makar German shared his company’s development strategy and secrets to building brand strategies that will promote research projects; Fedor Senatov, the head of MISiS’s Research and Education Center for Biomedical Engineering, spoke about the development of biomaterials science and the creation of materials for artificial organs; and Nikita Marchenkov elaborated about the prospects and opportunities of synchrotron research. Daria Denisova, the head of ITMO’s Center for Science Communication, filled the participants in on the recent trends in science communication and shared common tools that scientists can use to present their achievements; and Konstantin Fursov, the deputy general director for Science and Education at the Polytechnical Museum and a laureate of the ITMO Fellowship & Professorship program, showcased examples of how museums can help people and scientists communicate by presenting the most successful projects in this field.

After the discussions, the participants were asked to come up with their own communication strategies to promote their products. To do so, they were divided into eight teams based on their research interests. Each team was guided by a science communicator who helped future experts in materials science find the right communication and organization tools.

“It was amazing to see new collaborations forming and developers acquiring new perspectives on their projects over the course of the school. For instance, students from MISiS and Peter the Great St. Petersburg Polytechnic University (SPbPU) partnered up to create a platform for collaboration between investors and researchers, and a PhD student from the Kuban State University and science communicators from ITMO together came up with a podcast on metamodelling and created a product launch checklist,” says Yulia Volzhina, a second-year student of the Science Communication Master’s program.

Meanwhile, a Master’s student from MISiS showed how his multimedia longread can help promote studies on the use of nanoparticles for cancer therapy, whereas a PhD student from the Kuban State University plans to attract more young scientists to the math school at his university with a podcast.

“It was a great chance to talk about science and its future with specialists from various fields and levels. I enjoyed the school’s format. We could openly communicate and work on our own projects. Thanks to the school, I met like-minded people and got inspiration for new ideas,” shares Egor Plahotnyuk, a PhD student from MISiS.

“I was happy to meet and work with other scientists. I enjoyed exploring scientific projects, finding the most suitable communication formats for them, and what’s more, doing it side by side with other researchers, as well as seeing and hearing how passionate they are about their projects,” adds Sofiya Noga, a second-year Master’s student of the Science Communication program.