Mikhail Titov talks about how to build a scientific career in Europe and how many languages one needs to know for this. 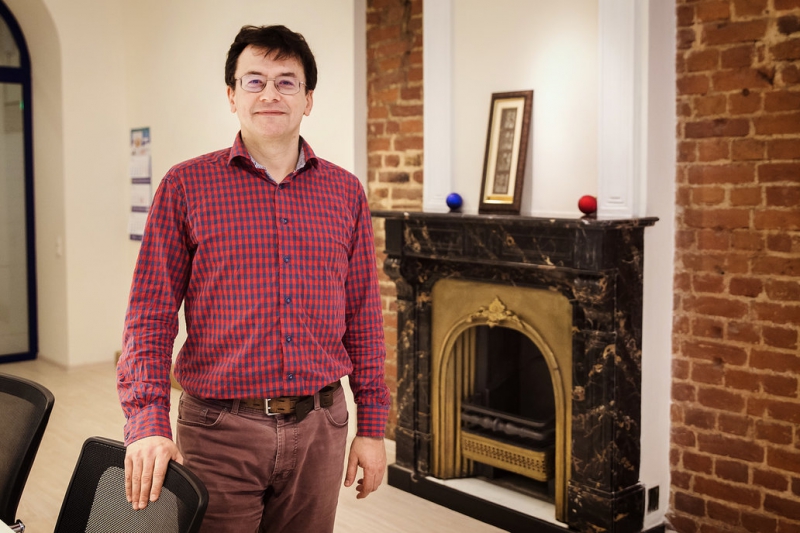 How did your career in science begin?

I moved to St. Petersburg from Krasnoyarsk and enrolled in St. Petersburg State University in 1989. I then graduated from the university and entered a PhD program at the Institute of Nuclear Physics. As I neared the end of my PhD program, I started working with research groups abroad and left Russia for Holland upon defending my PhD thesis in 1999.

So, you were working in Russia all throughout the "turbulent 90’s"?

In a way, yes. I studied from 1989 to 1995 and was doing my PhD from 1995 to 1998. Right after that I became a junior research associate. I traveled abroad a bit at the time, mainly to Germany, but mostly stayed in Russia. It was a turbulent, but quite optimistic time as I remember it.

Where did you work right after you moved to Europe?

I left Russia for good only in January 2000 to start with a standard 2-year postdoctoral position at the University of Leiden in the Netherlands. This was a position for a theory project in mesoscopic phyics: the field describing universal properties of electron transport in very small conductors at very low temperatures. This is a very standard way of academic career to go through a sequence of short post-doctoral contracts in different groups and in different countries before obtaining some kind of permanent faculty job with certain privileges. What is characteristic for postdoctoral positions is that you mostly do research, which is interesting. While on permanent positions you mostly do teaching, administration and proposal writing. In my case, I followed a curvy trajectory: after Leiden I moved to Max Planck Institute for Complex Systems in Dresden and spent 4 years there in a small semi-independent group. Then I worked at the University of Konstanz which is on the border of Germany and Switzerland for almost two years. After that I got my first permanent job at the Heriot Watt University in Edinburgh, Scotland. Five years ago I returned to the Netherlands, to Radboud University in the city of Nijmegen, where I am still working at the moment. My current job involves collaboration with many research centers and quite a bit of travel. In the last few years I have been working mainly with German and Russian groups. I have been cooperating with ITMO - mainly with some young researchers - for a long time. It was them who informed me about the ITMO Fellowship program.

Has the topic of your research shifted over the years or have you stuck to a particular one?

My research was always related to electron transport in different materials and devices. Some of my recent research is relevant for applications in electronics and spintronics. This area is directly related to technologies used in mobile phones and computers. Spintronics originated from the idea of using magnetic moment, or spin, of electrons for transferring and storing information.

This area of research becomes trendy from time to time. Older computers have hard drives, which is an example of old spintronics technology developed in the 50s. Those contain mechanically moving parts that limit the speed of data transmission and compromise the reliability of the entire device. Nevertheless, hard drives still provide a very high density of data recording. Today, one aims to develop technologies that are free of mechanical parts but still enjoy all the benefits of magnetic memory. One way to do it is to control magnetization by using current pulses. Using this effect, one can make memory for computers or propose spin transistors, for example. Recently, researchers came up with an idea of using antiferromagnetic materials for computation and data storage. Controlling antiferromagnetic domains with the help of electric pulses is a rather promising area in my opinion.

Do any prototypes exist already or is it still a theory?

There are examples of ferromagnet-based RAM. However, those are not very competitive as compared to SSD (solid-state drive) technology. In the last year some prototypes were created that use antiferromagnets. Counters and simple red-out schemes have been demonstrated to work surprisingly well for these prototypes. In our project we are mostly trying to understand what effects are important for physics of such anti-ferromagnet devices, what is required from the material to amplify the desired effects, or what kind of composite device one may propose in order to achieve optimal characteristics.

What does your cooperation with ITMO entail?

I've known Dmitry Yudin, who is a researcher at ITMO’s Department of Nanophotonics and Metamaterials, for a long time. At the moment we work together on spintronics-related problems. We have also received a three-year funding from the Russian Science Foundation for an antiferromagnetic spintronics project. Dmitry and I have also co-published several papers on this topic. The team here at ITMO is very proactive and highly qualified. I enjoy being a part of it.

Are you going to teach at ITMO?

I'm not going to teach any regular course but I am going to work with Master’s students. There will be tasks and projects that are suitable for students. So, naturally, we are going to find students who are interested in this kind of work.

You’ve worked in different countries: Russia, Scotland, Germany and the Netherlands. Can you compare the different approaches they have?

One always has to find a proper balance of several things: work should be interesting, pay should be good and your family should be comfortable. And sometimes it involves a certain compromise. Every country provides different opportunities. From my experience quality of life is Germany was always the best, but it is a country where it is notoriously difficult to get any permanent contract in academia. The competition for such jobs may reach 300 applicants per position. As for Russia, I think the country is still changing very fast. The planning horizon in universities here is 3 years at the very best. Europe offers much better professional protection with good lifelong contracts, retirement plans, etc. Scotland was, however, a very difficult country for me to work in. But that was mostly due to my personal circumstances. On the other hand, it was also an “easy” country because you don’t need to learn another language - everyone speaks English. It is generally difficult to get a permanent job in academia anywhere in Europe: you’d need to achieve excellent results rather uniformly in all relevant skills.

For foreigners it is normally easier to get a permanent job in the UK or the US first. Then one may try to go back to Europe. Such a career development may easily take 10-15 years and is becoming less and less attractive for young people. The world is also changing very rapidly now. Traditional university science is no longer as attractive to young people as it used to be. Many smart people leave for Asia now or work on specific projects, different start-ups and spin-offs. I am not sure how long the current academic system will function. It is becoming less and less efficient from my point of view.

How fluent do you need to be in English to work in Europe?

It’s desirable that one speaks fluent English - and not only English. I live in Germany, for example. Every day I commute to work to the Netherlands (25 minutes by car). In the German town where I live, everyone speaks German, while at work everyone speaks Dutch and English. That is already three languages that I need to understand. I teach in English but I am a member of several committees - and knowing Dutch is a requirement. Meetings at the university and all the documentation are very often entirely in Dutch. It’s quite common to know several languages in continental Europe, at least German or French. Limiting one’s language capacity to just English means being doomed to an incomplete life; while knowing more languages makes one feel much more comfortable.

What should students do today? And how can they build a successful career in science?

One should be interested and actively engaged in what is happening in the world. Especially now that ITMO University is so rapidly developing, there are all kinds of opportunities here. Take some time to communicate with the visiting professors, for example. This should help you to get a better outlook on what is going on in the world and give you some ideas on what you may wish to do in the future. What else? No matter what choice you make, it’s important to see the purpose in what you are doing and have a keen interest in it. If you are losing interest, it is a sure sign that you are doing something wrong. Not necessarily the subject is wrong, but maybe you just need different people and different atmosphere around. It is an important thing not to get stuck anywhere for too long.

The people surrounding you, your mentors, should also be interested in their research. Success and formal regalia are secondary or, even, irrelevant. The keen interest in one’s research subject is always primary. On the one hand, one should keep in mind that physics is a complicated and problematic way of making your living. Still you always have a choice whether to engage in more practical or in more fundamental aspects of science. Every person bases that decision on their primary interests. Often, students want to do something more fundamental right after their graduation. They have a strong desire to understand the fundamental principles of science, deal with global issues and find out how the universe functions. After a while they get more interested in practical things. And you shouldn’t forbid yourselves to shift the perspective.

Is it true that more and more scientists do interdisciplinary research nowadays, like working at the intersection of physics and chemistry?

Well, definitely. I myself have lately become somewhat more interested in chemistry, which I had been always afraid of before. But physicists and chemists work together in Holland. Many chemists are active in the areas which traditionally belong to the physics research. This especially concerns specific materials with some unusual quantum properties that may be interesting for applications. This kind of research requires a combination of very different types of knowledge from chemistry to quantum physics that nobody actually has. A versatile physico-chemist is still a utopia, but even a limited knowledge of different scientific fields can be very helpful and enriching.

What are your future career plans?

I’m planning to focus further on fundamental and applied science related to spintronics and electron transport. There are many ideas that I find interesting in these fields. Some of them are related to fundamental science of the Boltzmann equation and its expansion; and others are applied, computational or analytical.

I am interested in collaborating with people who do experiments and produce actual devices. Doing calculations for such projects is a very practical application of science. Also, you learn details that you would not get in any other way. I have a list of research problems that I would like to solve in the next 5 years. It might actually take longer to cross everything off in this list, but the list looks exciting to me. Definitely I won’t be able to solve all these problems myself, but I have certain ideas about how to solve the problems and I know people who can help me. I still have certain blind spots in my educational background, which I am striving to fill. That is another source of my motivation. It is actually very rewarding to educate oneself: read books and learn from other people. That is the main thing that makes life in academia interesting.