The 48-hour hackathon BioHack-2018 has taken place in St. Petersburg. Teams of biologists and programmers from all around Russia worked on bioinformatics cases. The event brought together both university students and young scientists. Software and IT developer EPAM and the Institute of Bioinformatics sponsored the project. 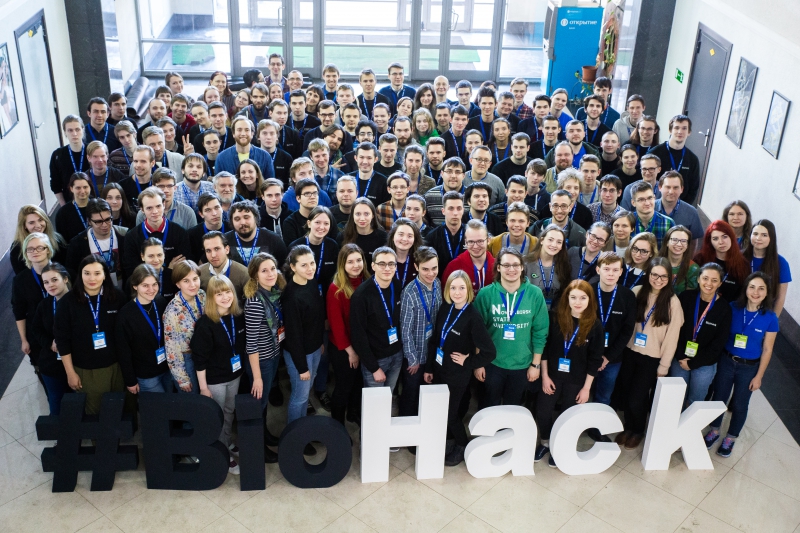 To take part in the hackathon, the participants simply had to sign up and submit a letter of motivation. Teams could only take part together if all applicants had passed the selection process, as the hackathon’s goal is to promote interdisciplinary research and help the participants develop skills they need to work in mixed teams of biologists and programmers.

Before the hackathon, teams had the opportunity to state a preference for a particular project they’d like to work on; however, the tasks were assigned only on the hackathon’s first day. The tasks were developed by EPAM, the Institute of Bioinformatics, ITMO University, various medical research universities and centers, as well as the event’s industrial partners. Teams could also propose their own projects – provided they haven’t been completed elsewhere before.

Each completed project was assessed according to five criteria: its technical benefits (the project’s industrial scalability), social utility, completeness, presentation and the project’s general “appeal” – explains Vladimir Ulyantsev, member of the jury and assistant professor at ITMO’s Computer Technologies Department.

“There were some very talented students there, some of the best in their field, because they had to pass a selection to get into the hackathon. They can continue the projects they worked on – with mentors or at universities. Last year, for example, I was mentor to a student from ITMO University. This year she’s getting ready to defend her thesis and publish a study based on the project she’d done during the previous BioHack. 90% of all the projects this year happened to be scientific. It’s hard to call that an advantage, as you can’t discover anything particularly novel in just two days. It was, therefore, even harder to evaluate the projects, and much depended on how well they could present their work,” – he explains.

The project required them to create a model that would be used to predict the development of a neurodegenerative disease based on the analysis of repeat genetic sequences. These repeat sequences are cause of the RAN-translation process, which produces proteins containing certain amino acid sequences. These proteins, in turn, are involved in the formation of particular substances that are associated with neurodegenerative diseases. In addition, the number of repeat genetic sequences is known to correlate to the rate of disease contraction.

The team’s task was to use an existing set of big data to analyze the presence of repeat sequences in the genomes of healthy patients and those suffering from neurodegenerative diseases. Based on the results, they were to use a neural network and machine learning to build a predictive model for such disease. The result model reproduces the results acquired by scientists through experimental methods. Students note, however, that the model cannot produce 100% correct predictions. First of all, there is still very little data on RAN-translation and its effect on disease – less than 10 articles on the topic exist. Second of all, the repeat sequences that precede a disease are not always the same.

“The mechanics of this have not been studied well yet. To understand where we can find a RAN-translation, we tried to compile all the knowledge acquired by the authors of several existing articles and then predict which genes, theoretically, might present us with the right conditions. Then, scientists can verify our predictions with experiments. BioHack is a great place to try to quickly check something that you’re concerned with but just don’t have the time: here, you have people from different fields working together,” – comments Dmitry Smirnov, ITMO student and member of team NoPasaRan.

The second place – and a prize of 70,000 rubles – went to team m(olot)TORa (Thor’s Hammer). The team owes its outlandish name to its task: they had to find out how pluripotency factors can have an effect on the expression of genes involved in the mTOR signal pathway. Or, in other words, how these factors affect the growth, metabolism and development of certain cells. We know that the human organism contains pluripotent cells – “universal soldiers” that produce cells for various types of tissue. The mTOR signal pathway changes these cells’ functions. But how? Can it inhibit those cells’ growth processes?

Yes, it can. To find that out, the team analyzed experimental data and data on gene expressions from open databases. According to Vladimir Ulyantsev, the team employed genuine scientific methods and managed to carry out a full-fledged study in just two days, which is what got them the second place.

The first place – and a prize of 100,000 rubles – went to the team Good Vibrations, who presented a somewhat unusual project that the jury dubbed “Shazam for fruit flies”. The winning team has developed a way to determine the intentions behind the “songs” performed by male fruit flies and presented a completed algorithm.

The team used a database of audio recordings of fruit flies’ mating songs, which are used by biologists to better understand the insect’ nervous systems. Today, special software exists that can be used to sort the recordings according to specific criteria, but it isn’t perfect, meaning that scientists still have to spend time verifying the results manually. For this reason, the team had to develop an algorithm to improve the accuracy of the software.

Participants split the audiofiles into segments which they used to educate a neural network-based model. The resulting algorithm doesn’t just analyze the entirety of each “song”, but can also be used for other sound types. For that, it would only need to be “re-educated” – the developers used universal characteristics for analysis of the data. When checked, the algorithm’s results showed a 93% match with the results of analysis carried out by humans.

23 teams from St. Petersburg, Moscow, Yekaterinburg, Novosibirsk and other cities participated in the hackathon. All of the teams passed into the final stage, which is quite rare for a hackathon.