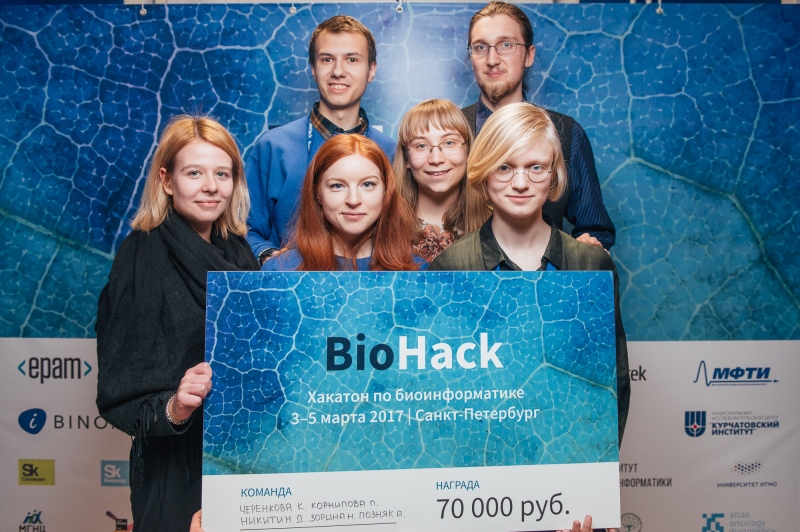 St. Petersburg's first hackathon on bioinformatics was organized by the international IT company EPAM in collaboration with Bioinformatics Institute. ITMO University hosted the event, which gathered the 100 participants who've passed competitive selection. For two days, they had to solve tasks set by leading scientific centers, laboratories and research institutions that work in the field of bioinformatics, as well as its adjacent fields. Among them were Moscow Institute of Physics and Technology, the iBINOM Company, Bioinformatics Institute, Genotek Company, Institute of Protein Research of the Russian Academy of Sciences and others.

As Anastasia Makarova, marketing specialist of the EPAM Company and head of BioHack project notes, 70% of participants were from St. Petersburg’s universities (ITMO University, Saint Petersburg State University, St. Petersburg Polytechnic University, and others), about 10% came from Moscow (Moscow State University, Moscow Institute of Physics and Technology, etc.), and the rest were from Russia's other regions. The hundred participants that passed the selection were split into 24 teams of 3−5 people, each comprised of both biologists and programmers.

"I often ask myself: what do we do for developing ties in our professional community, and how do we stimulate our field's development? I believe that such events like this hackathon are great for doing that. BioHack gathered talented, motivated and ambitious professionals. When talking of teamwork, we have to unite biologists and programmers, as together they can give great results on different projects", notes Anastasia Makarova. The participants could choose their tasks according to their taste and competences — first, they had the opportunity to rank them on a scale from one to five. Daria Zenkova, student from ITMO's Computer Technology Department, was in a team that had three biologists, including the supervisor, and three programmers. They chose the "Predict them all!" project from Saint Petersburg State University. Its purpose was to decrease the cost of experiments which are now too expensive. For instance, now in Russia a good RNA-seq experiment costs more than a million rubles, and few institutions can afford it.

"Why do we need them? In Europe and the USA they are used to diagnose complex syndromes, when mixed diseases are present and it’s hard to define what happens to the patient. This mostly has to do with oncology and hereditary diseases. That's why we want to learn to predict their results beforehand", notes Nikolai Panushev, the project's head. "Why did we choose this project? It is very creative: we even did not know what to start with. What is more, the project uses machine learning, adds Daria Zenkova. The main difficulty was the lack of data, as the experiments are really expensive. Unfortunately, we couldn't research the whole profile of possible interrelations. Yet, we are sure that we can do that with more data, so we may still continue the project and get some results".

In future, the team plans to create a working algorithm which will learn to predict these results. If everything goes successful, the participants will work on developing a special service for scientists which will be user-friendly not for programmers only, but biologists as well.

Maksim Averin, another student from Computer Technology Department, was part of the team that worked on a project "What's the buzz about," or how to learn about a disease using pubmed and a dictionary which has to do with Alzheimer's disease. the team analyzed 70 thousand articles on the subject to show how approaches to treating it changed with time. The "What's the buzz about, or how to learn about a disease using pubmed and a dictionary" project’s team

"One of the interesting trends we've learned about was that during one time, researchers believed Alzheimer to be caused by high content of aluminum in one's organism. Yet, as soon as people stopped used aluminum kitchenware, such ideas stopped being published, shared Maksim Averin. All in all, the project was most useful from the technical point of view, though it would have been most hard without a biologist. For me, that was an interesting experiment on how to apply my knowledge in programming to a real bioinformatics task".

The team has yet to develop an interface for their results, but it might well do it after the hackathone. According to its members, their results may be used for creating an analytic service for researchers.

Among other projects presented at the hackathone were also those thatcan be appreciated not only by scientists, but also by novices in bioinformatics. For instance, a student from the Bioinformatics Institute proposed creating a mobile application that will teach its users such terms as nucleotide complementariness, DNA sequence assembly and such. The application looks somewhat like a Tetris game, where short sequencing reads "fall" on the genome; the task is to complete it the best way.

The prize winners were teams that worked on "Research of bond states of water in biomacromolecule interfaces" and the "Horizontal gene transfer by bacteriophages in metagenomes" projects (ITMO's student Ludmila Kornilova was part of its team). The teams that got 3rd and 2nd got 50,000 and 70,000 rubles correspondingly. The first prize winners — team of the "Analysis of demographic history by genome data" project — got 100,000 rubles. According to Vladimir Uliantsev, jury member and member of ITMO's "Computer Technologies" International Laboratory, the jury was objective in its decisions despite the projects' difference.

"No jury member was 100% satisfied with any of the projects, yet no project failed completely. Everything was fine and disciplined," noted Mr. Uliantsev. "As for research work, participants had no difficulties with neither programming nor biology, though there some with the general approach. Also, the event contributed to their recognition, and the participants have to understand that it's important. We will have to mind this aspect in the future, as well".

Vladimir Uliantsev is sure that the interest towards bioinformatics will grow in St. Petersburg. This means that there will be more and more similar events. "I believe this is only the beginning of bioinformatics popularization. The local scientific environment contributes to it: the Bioinformatics Institute develops, as well as ITMO’s laboratory; we are planning to open a Master's Program on bioinformatics, as well. Thus, grows the number of people who want to study it, as well as number of related events: hackathones, conferences, different stand-up events", he shares.

According to Anastasia Makarova, head of the project, St. Petersburg's first hackathone is already a successful project, so it is to be conducted annually. The amount of participants for the next year may grow, as well.