Humanity’s understanding of the world has expanded far into space and deep into the structure of matter, and mathematical science became our guide into the world of the counterintuitive and the unimaginable. Alexey Semikhatov, a science communicator, PhD, and scientific curator of the Moscow Polytechnic Museum, joined ITMO University’s open lecture series at New Holland to talk about how the logical abilities of the human brain, as formalized in maths, help us forecast the yet-undiscovered areas of the universe. Learn the highlights from Dr. Semikhatov’s lecture in the article below; you can also watch the complete lecture (in Russian) here. 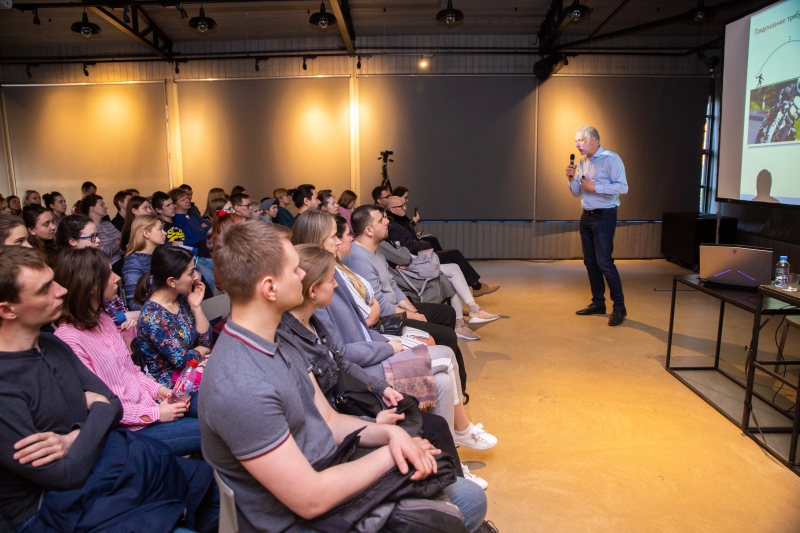 Alexey Semikhatov's lecture "Predicting the Unknown: From Quarks to Planets and Parallel Universes"

Alexey Semikhatov came to ITMO University to deliver lectures for the students of Master’s program in Science Communication. As part of the course “Curatorship in Science Museums and Science Popularization Centers”, he shares his insight into the work and renovation of the Moscow Polytechnical Museum. The course is developed and supervised by Irina Aktuganova, an art and museum expert and associate professor at ITMO’s Institute of International Development and Partnership.

For ITMO University’s lecture series at New Holland’s Open Lecture Hall, Dr. Semikhatov explained how, using scientific methods, our minds can predict the existence of crucial elements of the universe without being able to see them, just like we did with planets, the Higgs Boson, dark matter, and more. What is it that makes these predictions possible? According to Alexey Semikhatov, when properly developed, the same brain capacities that allow us to drive vehicles in extreme conditions can also help further our understanding of the world.

This is the very idea that lies at the foundation of the famous story about Isaac Newton and the apple that, reportedly, fell on his head while the scientist moongazed and prompted Newton’s discovery of the law of gravity. It was then that two key things were made clear to the scientist: that the earthly and the celestial are one and the same and subject to the same laws, and therefore that both can be predicted. A crucial part of any prediction is a law. First, the laws of nature were treated as godly laws; over the centuries, the need for the godly part decreased, and studying the natural laws became a top priority.

For various reasons, the law that originated with Newton almost always takes on a mathematical form. A mathematical law is always a behavioral equation, as the behavior of everything is subject to several conditions; if something is a certain way right now, we can understand how it will change in the next fraction of a second. The laws by which the present determines the future are represented by differential equations, and they more or less control everything: the propagation of sound, electromagnetic waves, the falling of a body into a black hole. These equations are universal.

In the 19th century, the Solar System was believed to include the planets Mercury, Venus, Earth, Mars, Jupiter, Saturn, and Uranus – but no Neptune. By the start of the century, astronomers understood that the planets move according to a law. Upon closer inspection, however, it was found that Uranus exhibited irregular movements. Although it was known that the masses of much larger Jupiter and Saturn were affecting the planet’s elliptical orbit, it was apparent that something else affected its movement.

“If your understanding of the world conflicts with your observations, you must understand that you should either change your understanding, or see if you’re missing something. It’s incredible how long, back in the early 19th century, it took for people to accept that if it doesn’t work on paper, then you should look for inconsistencies in there,” says Alexey Semikhatov.

In 1821, French astronomer Alexis Bouvard described the irregularities in the motion of Uranus, and two decades later, in 1843, John Couch Adams suggested the existence of an unknown planet and decided to imagine how it would need to move in order to affect Uranus in the way Bouvard described it, but did not succeed. In 1846, French mathematician Urbain Le Verrier carried out the calculations on his own and enlisted the help of astronomer Johann Gottfried Galle. On September 23 of that year, a Berlin observatory student named Heinrich Louis d’Arrest suggested comparing a map of the area studied by Le Verrier with the sky. The planet Neptune was discovered on the same night. All it took to predict the unseen using refined logical analysis was an increased quality of observation, disagreement with the established theory, some guessing, and a bit of luck.

A similar story is unfolding right now. These days we know that the Solar System extends much farther than Neptune, Pluto, and the many dwarf planets. In 2014, American planetary scientists Konstantin Batygin and Michael E. Brown proposed the existence of a massive planet the size of 200-300 Earths somewhere beyond the dwarf population. How did they determine that?

The orbits of dwarf planets, elliptical in shape, have all been measured; but why are their orbits the way that they are? To understand that, we need to move backward. First, examine the equations that describe the evolution and origin of the Solar Systems. Then, we ask: “What conditions would need to exist in order to provide the planets with these exact orbits?” Turns out that the likelihood of something like this happening on its own is infinitesimal.

“Modern science often predicts things based on the following premise: we don’t like unlikely things, and we like things that have reasons. Turns out that if a planet of such mass were to travel such a route, the orbits of other planets would be exactly as they are today. It’s difficult to find the planet itself because it’s too far away and we don’t know exactly where it is. In other words, the idea of its existence is based on indirect reasoning. Nevertheless, we’ve discovered another dwarf planet since then, and its orbit is exactly the way it would be if the ice giant were to be real,” explains Dr. Semikhatov.

Predicting a new type of matter

Humanity has long been aware of the existence of electrical charges, the magnetic field, and other phenomena reflected by the laws of Coulomb, Faraday, Amper, and Ørsted. In 1861, physicist James Maxwell decided to formulate all these laws as manifestations of the same phenomenon. Maxwell’s equations, as we know them today, were initially quite contradictory. By the time of Maxwell’s research, each of these laws had already been experimentally proven, but, when subjected to logical analysis, could not coexist.

That’s when Maxwell pulled a trick that revolutionized the entire idea of writing down experimental data as equations. Following the idea of symmetry, simplicity, and elimination of contradiction, he added a new item into the equation… and it promptly disappeared. Now that the new item, that did not come from any experiment, was added, the equations were no longer contradictory; however, they now had new solutions.

When Heinrich Hertz proved the existence of electromagnetic waves in 1888, Maxwell had been long dead, but Hertz’s discovery was made using experiments, logical analysis, the consideration of Maxwell’s equation, and some guesswork.

On June 10, 1854, Bernhard Riemann defended his thesis “On the hypotheses which underlie geometry”. This work was said to be one of the top ten mathematical studies ever made  and became a major milestone in the history of mathematics. Expanding on non-Euclidean geometry, Riemann understood how geometries are controlled, that they can be of any kind, and that they do not require any external space.

In 1916, Albert Einstein had found Riemann’s writings in his endeavor to mediate the theories of relativity and gravity and finalized his formula of the theory of relativity, also known as the Einstein field equations, which serve as the foundation of concepts of black holes, gravitational waves, and much more. These discoveries gave us the rule that goes “space tells matter how to move, and matter tells space how to curve.” What we perceive as the attraction of bodies is their movement in curved spacetime.

Einstein’s equations have given us two other discoveries. In 1922, Alexander Friedmann took on the audacious task of applying Einstein’s equations to the entire universe. It turns out that the equations have a solution in the form of a non-static universe (it was previously believed that the universe is static). In other words, Friedmann discovered that the universe is expanding, which became the origin of Hubble’s law. Friedmann’s achievement was being daring enough to apply a newly-written equation based purely on mathematics to the entire universe.

The second discovery occurred in 1916. A year prior to his death, astronomer Karl Schwarzschild found a spherically symmetric solution to Einstein’s vacuum equations. It was overlooked until the ‘60s, when it got a new name. Today, it is widely known: it is the formula that describes a black hole – yet another piece of the global puzzle. And it is all thanks to equations.

“Schwarzschild’s formula is our fullest understanding of black holes. What is a black hole? It is a solution, provided by Schwarzschild and a few others who summarized his findings. We know nothing else about black holes. They cannot be observed, as they are areas where matter has lost to gravity to such a degree that gravity no longer lets even light get out; it’s where time stops and light that passes by spins around like a spaceship orbiting it. A century later, we began to discover the traces of this formula in the sky above us. Now we know that a supermassive black hole – a quasar – exists at the center of nearly every known galaxy,” explains Alexey Semikhatov.